US Attorney General William Barr shakes up prisons bureau after the suicide of Jeffrey Epstein inside a federal jail. 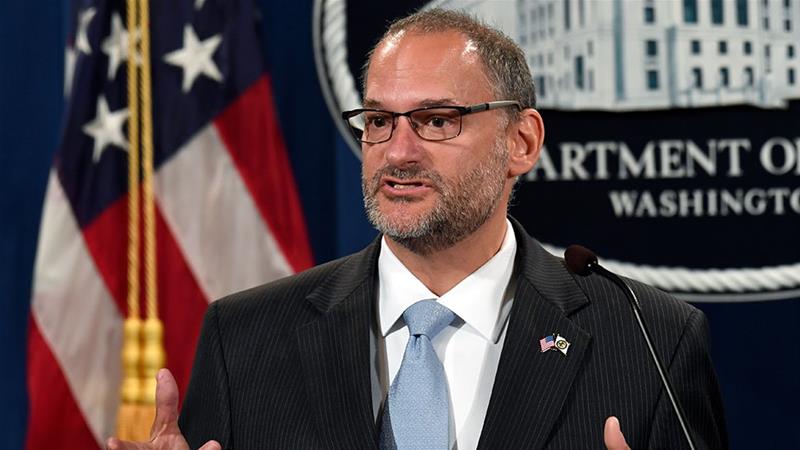 United States Attorney General William Barr on Monday announced a new leadership team at the federal Bureau of Prisons in a shakeup of the agency following financier Jeffrey Epstein’s suicide inside a federal jail in New York.

Kathleen Hawk Sawyer, a veteran of the Bureau of Prisons, will return to the agency to serve as its director, Barr said. He named another former agency official, Thomas Kane, to serve as her deputy.

Hugh Hurwitz, who has been serving as the bureau’s acting director – including when Epstein was found unresponsive over a week ago in a Manhattan jail cell – has been reassigned to his prior position within the agency.

Epstein had been arrested on July 6 and pleaded not guilty to federal charges of sex trafficking involving dozens of underage girls as young as 14.

His death was ruled a suicide by hanging, according to an autopsy report released on Friday.

The bureau has come under intense scrutiny since Epstein’s death, with politicians and Barr demanding answers about how Epstein was left unsupervised and able to take his own life on August 10 while held at one of the most secure federal jails in the US. Multiple investigations are under way.

A statement from Barr on Monday gave no specific reason for the reassignment. But Barr said last week that officials had uncovered “serious irregularities” and was angry that staff members at the jail had failed to “adequately secure this prisoner”.

Barred ordered the bureau last Tuesday to temporarily reassign the warden, Lamine N’Diaye, to a regional office and the two guards who were supposed to be watching Epstein were placed on administrative leave.

Those guards on Epstein’s unit failed to check on him every half hour, as required, and are suspected of falsifying log entries to show they had, according to several people familiar with the matter. Both guards were working overtime because of staffing shortages, the people said.