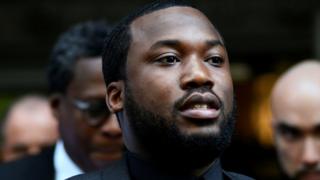 US rapper Meek Mill has been granted a new trial on drugs and weapons charges that date back to his teenage years after a long legal battle.

Three judges in Pennsylvania ruled there were credibility issues with his original trial in 2008.

The rapper, who was jailed in 2017 for a minor probation violation, now campaigns for criminal justice reform.

He has been supported by celebrities and campaigners who say the system treats minorities more harshly.

Jay-Z, and the owners of the New England Patriots and Philadelphia 76ers, Robert Kraft and Michael Rubin, have joined Meek Mill in creating the Reform Alliance to help people who are “trapped in the system”.

Meek Mill, whose given name is Robert Rihmeek Williams, said that the past 11 years had been “mentally and emotionally challenging” but that he was “ecstatic that justice prevailed”.

What is the case about?

The Pennsylvania Superior Court panel ruled on Wednesday that Meek Mill had the “right to be tried before an impartial judge… because the trial judge heard highly prejudicial testimony at the first trial.”

The sole witness in the first trial was a now discredited drugs squad officer who is no longer with the Philadelphia force.

He was sentenced in 2009 to between 11 and 23 months in county prison, but was released on parole after five months and given a 10-year probation.

Wednesday’s decision by the court means prosecutors now have to decide whether to hold a new trial or drop the case.

How did he begin campaigning for justice reform?

While on parole he started to make his name nationally as a rapper, signing to Rick Ross’s label and releasing a string of hugely successful mixtapes. Before long he was a platinum-selling artist.

But he was arrested in August 2017 for reckless driving as he rode a dirt bike during filming of a music video.

Although the charges were later dropped, a judge ruled the arrest itself was a breach of his probation and he was jailed that November for up to four years – prompting an outcry from Jay-Z, Beyonce and others who campaigned to free him.

He was released after five months after Pennsylvania’s top court granted him bail.

His group, the Reform Alliance, says it aims to “dramatically reduce the number of people who are unjustly under the control of the criminal justice system, starting with probation and parole”.