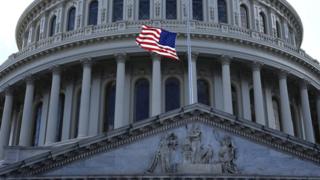 Campaign officials for the US Republican Party had their email accounts hacked ahead of this year’s mid-term elections, it has emerged.

The National Republican Congressional Committee (NRCC) said it was the victim of a cyber intrusion by an “unknown entity”, and the FBI had been informed.

Party officials said none of the emails had been made public.

News website Politico, which first reported the hack, said the accounts of four senior aides had been targeted.

It said the accounts were compromised for several months until the intrusion was spotted in April by an NRCC official who alerted the committee.

The NRCC co-ordinates election campaigns for Republican candidates running for the US House of Representatives, the lower house of Congress.

Politico, citing senior party officials, said the NRCC had kept details of the hack hidden from the party’s leadership, as well as its house members, saying it feared it would make it harder to find the culprit.

NRCC spokesman Ian Prior said: “The NRCC can confirm that it was the victim of a cyber intrusion by an unknown entity. The cybersecurity of the Committee’s data is paramount, and upon learning of the intrusion, the NRCC immediately launched an internal investigation and notified the FBI, which is now investigating the matter.”

He added: “To protect the integrity of that investigation, the NRCC will offer no further comment on the incident.”