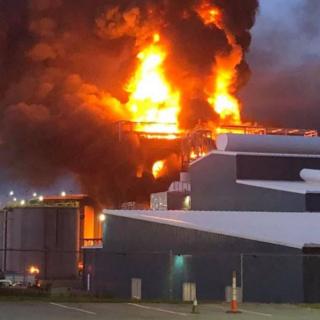 Authorities in North Carolina have ordered mandatory evacuations after a massive fire at a metal recycling plant led to air quality warnings.

Firefighters were called to the American Zinc Products facility on Sunday around 20:00 (01:00 GMT on Monday) in the town of Mooresboro.

At some moments, the fire’s flames rose over 75ft (23 meters), officials say.

A mandatory evacuation zone has been established within a half mile (0.8 km) of the fire due to the poisoned air.

Fire crews had isolated the flames to one part of the facility, but were required to pull back after their equipment tested positive for hazardous materials, according to local news affiliate WSOC.

According to the Associated Press, the inferno may have released harmful sulphuric acid into the air.

“Currently Rutherford County has issued a 1/2 mile radius evacuation of the Zinc plant, due to the air quality,” the Chesnee Community Fire Department Inc informed the public on Facebook on Sunday night.

Subsequent posts called for “prayers” for firefighters, at least 100 of whom were called to tackle the blaze.

In a late-night Facebook post, the Rutherford County Government said that sheriff deputies had gone door-to-door to inform residents of the evacuation order.

An emergency shelter has been temporarily set up at the Chase Middle School’s gym, although classes will proceed as normal on Monday school principal Jason Byrd told WSPA-TV.

By 07:15 local time on Monday, the blaze had been extinguished, but air quality testing continued.

The cause of the fire has not yet been determined.