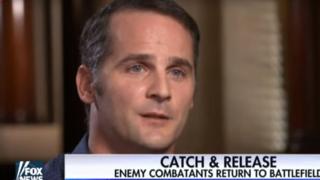 A decorated US special forces soldier has been charged with an Afghan man’s murder, which he reportedly admitted while applying for a job with the CIA.

US Army Green Beret Major Matthew Golsteyn allegedly shot someone he described as a suspected Taliban bomb-maker during his 2010 deployment.

Maj Golsteyn also subsequently spoke about the incident during an interview with Fox News.

He denies the charge and maintains he did not violate rules of engagement.

US Army Special Operations Command spokesman Lt Col Loren Bymer said in a statement: “Major Matthew Golsteyn’s immediate commander has determined that sufficient evidence exists to warrant the preferral of charges against him.”

Maj Golsteyn’s lawyer, Phil Stackhouse, told US media he would be “relentless” in defending his client from the charges, which he was notified of on Thursday.

“Major Golsteyn is a humble servant-leader who saved countless lives, both American and Afghan, and has been recognised repeatedly for his valorous actions,” Mr Stackhouse said.

He was a captain during his 2010 deployment when his heroism won him a Silver Star, the Army Times reports.

The award was later upgraded to the Distinguished Service Cross, the nation’s second highest award for valour.

During Major Golsteyn’s time there, two Marines from his unit were killed by a booby-trapped bomb.

In 2011 he took a routine lie detector test during an interview process for a job with the CIA.

He allegedly told interviewers that on 22 February 2010 he and another soldier had taken an alleged Taliban bomb-maker off base, shot him and buried his remains, reports NBC News.

The admission led the Army Criminal Investigation Command to investigate Maj Golsteyn in 2011.

In April 2014, he got off with an official reprimand because of lack of evidence.

Two years later, Maj Golsteyn spoke on a Fox News special report, titled “How We Fight”, about how he killed the suspected bomb-maker.

He told the anchor he shot the man because he was concerned he would kill Afghan informants if released.

A congressman sided with Maj Golsteyn, writing a letter to the Army secretary to complain about the investigation.

Duncan Hunter, a California Republican, called for an end to the “retaliatory and vindictive” inquiry into “a distinguished and well regarded Green Beret”.

Maj Golsteyn was placed on leave, but has since been recalled to active duty, according to Army Times.

He is charged with premeditated murder, which carries a possible death penalty.