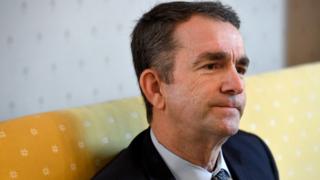 Virginia has suspended a rule allowing children to be strip-searched before jail visits after an eight-year-old girl was subjected to the ordeal.

Prison officials have apologised for last month’s incident and said proper procedures for child strip-searches had not been followed.

Virginia Governor Ralph Northam said he was “deeply disturbed” by the incident and called for an inquiry.

The girl was permitted to see her jailed father after she was checked.

The incident took place on 24 November at the Buckingham Correctional Center in the town of Dillwyn, Virginia.

The girl, who has not been named, had travelled for more than two hours for the visit with her father’s girlfriend, Diamond Peerman.

Ms Peerman is not her legal guardian and therefore could not legally give consent to a search, according to the prison.

They were singled out to be searched after a sniffer dog alerted guards, and were warned that if they did not agree they could be banned from the prison.

Virginia Department of Corrections spokeswoman Lisa Kinney said in a statement before the governor’s announcement that “the staff member who authorised the search… didn’t have the authority to do so”, and would be subjected to disciplinary action.

She added that “search policy was violated” and this “represents a breech in our protocol”.

“We sincerely apologise to this child and her family and will be taking immediate disciplinary action against the person responsible,” she said.

She added that Virginia prisons have seen cases of children being used to smuggle contraband.

Ms Peerman reportedly said the girl was distraught when told she would not be allowed to see her father unless she undressed in front of two female guards.

She told the Virginia-Pilot newspaper that a guard had asked the girl how old she was while she was putting her clothes back on, and that she found the question inappropriate.

“Why would you ask that when she’s naked?” Ms Peerman was quoted as saying.

They were granted a no-contact visit and permitted to speak to the incarcerated inmate through glass.

The girl’s mother says her daughter already suffered from bipolar disorder, depression and ADHD, and has had to miss school due to the humiliating search.

After the incident, the girl messaged her mother to say: “Am so mad the jail had to strip me with all of my clothes off this doesn’t make no sinc [sic].”

“Did they make you take your pants off?” her mum asked.

“Yes all of my clothes off,” she responded.

A prison official called the girl on 2 December to apologise and promise that the department would investigate.

The girl’s mother says her daughter has a good relationship with her father due to frequent visits, but the latest left her “traumautised”.

She added that the girl will not be visiting her father again due to the incident.