Several Democrats running in 2020 presidential election support government-run healthcare – but at what price? 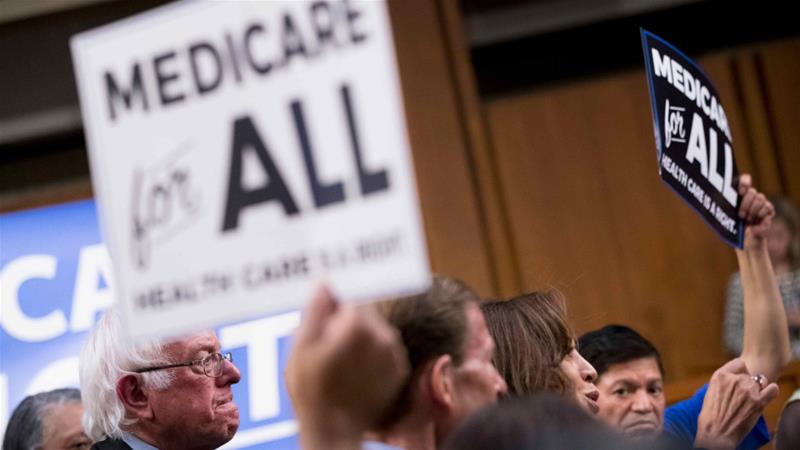 “Medicare-for-all” makes a good first impression, but support plunges when people are asked if they would pay higher taxes or put up with treatment delays to get it.

A survey released by the nonpartisan Kaiser Family Foundation on Wednesday comes as Democratic presidential hopefuls embrace the idea of a government-run healthcare system.

The poll found that 56 percent of Americans initially support “Medicare-for-all” compared with 42 percent who oppose the policy.

Those numbers can shift dramatically when people are given additional information.

Support increases to 71 percent when people learn “Medicare-for-all” would guarantee a right to health insurance, but if they were told that a government-run system could lead to delays in getting care or higher taxes, support plunges to 26 percent and 37 percent, respectively.

Mollyann Brodie, director of the Kaiser poll, told The Associated Press the big swings in approval and disapproval show the debate over “Medicare-for-all” is in its infancy.

“You immediately see that opinion is not set in stone on this issue,” she said.

The poll indicated widespread support for two other ideas advanced by Democrats as alternatives to a healthcare system fully run by the government.

There does not seem to be much disagreement that a single-payer system would require tax increases, since the government would take over premiums now paid by employers and individuals as it replaces the private health insurance industry. The question is how much.

House Budget Committee Chairman John Yarmuth has asked the Congressional Budget Office, which analyses the potential cost and effect of legislation, for a comprehensive report on single-payer.

Several independent studies have estimated that government spending on healthcare would increase dramatically, in the range of about $25 trillion to $35 trillion or more over a 10-year period.

A recent estimate from the Political Economy Research Institute at the University of Massachusetts in Amherst suggests that with significant cost savings, the government would need to raise about $1.1 trillion from new revenue sources in the first year of the new programme.