A crowd rallying against vaccination for Covid-19 clogged the streets outside a Vancouver hospital this week, haranguing and, in one case, assaulting health care workers, slowing ambulances, delaying patients entering for treatment and disturbing those recovering inside.

Kennedy Stewart, the city’s mayor, was among the many people to quickly condemn its members. 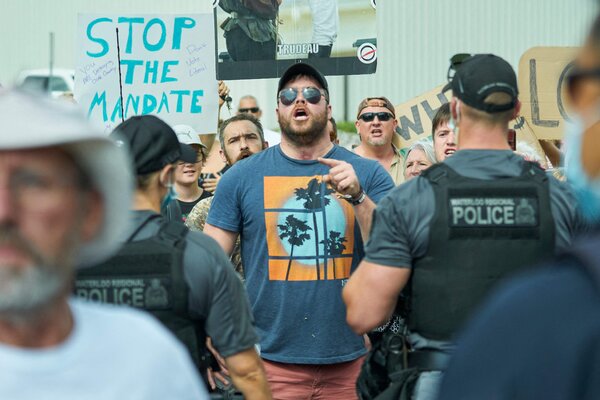 “When I see folks blocking health care workers who are working flat out to save people dying of Covid, it makes me sick,” he wrote on Twitter.

While polls show that Canadians opposed to vaccines are a decided minority, the Vancouver protest was not an isolated event. In British Columbia, protesters were out in Kamloops, Victoria, Kelowna, Prince George and Nanaimo. A hospital area in downtown Toronto saw a similar rage-filled protest, and an anti-vaccine group made its way through downtown Montreal.

All this, of course, followed the angry and often profane protests that have tracked Prime Minister Justin Trudeau during the federal election campaign, forcing the cancellation of one event out of safety concerns. It’s not just been Mr. Trudeau or Liberals who have been targeted. Anti-vaccine protesters twice showed up at the home of Stephen Lecce, the education minister in Ontario’s Progressive Conservative government. When protesters learned Mr. Lecce wasn’t home, they heckled his neighbors.

Coincidentally or not, public anti-vaccine rage emerged in a week that brought developments in some provinces requiring proof of vaccination for entrance to some public places. The vaccine-verification system in Quebec, which includes a phone app, came into effect on Wednesday. And in Ontario, Premier Doug Ford backed away from his long-held resistance to vaccine passports and announced a program that will be fully phased in by late October.

Mr. Ford’s announcement means that Ontario now joins British Columbia and Manitoba in addition to Quebec in requiring proof of vaccination for some activities. (Saskatchewan is working on the development of a vaccination passport, but it has not made vaccinations mandatory for any activity or job.)

There are significant differences between the provinces. For example, Quebec’s list of places that require vaccination is longer and more stringent than Ontario’s will be when it starts later this month. Dining at a restaurant in Quebec will require vaccination whether indoors or on an outdoor terrace. Ontario’s measure will apply indoors only, raising questions about how patio diners will use washrooms or, at many locations, even enter the outdoor dining spaces.

The reaction from businesses is mixed. The Canadian Chamber of Commerce last month called for clear mandatory vaccination rules from governments and vaccine passports. But some individual business owners, particularly those with restaurants, have raised concerns about vetting their customers and enforcing the rules.

No province has a blanket mandatory vaccination policy. But vaccine passports and vaccination mandates by employers or governments have raised some privacy and human rights concerns.

I asked Errol Mendes, a professor of law at the University of Ottawa, a human rights specialist, if mandatory vaccinations are likely to be overturned by any court.

He said that someone fired for refusing vaccination under a vaccine mandate set by an employer could bring a case under provincial human rights codes. Similarly, labor unions could argue that firings break their collective agreements. In the case of government-imposed vaccines, the Canadian Charter of Rights and Freedoms would come into play.

“But it’s not a certainty that any of these legal challenges would necessarily be successful,” Professor Mendes said.

It’s much more likely, he said, that any such case would follow the pattern set by the Supreme Court of Newfoundland when a provincial travel ban was challenged. It found that the ban did indeed violate part of the charter but was nevertheless legal because it was a reasonable restriction in the context of the pandemic.

Before calling the election, Mr. Trudeau said the government would require vaccines for its public servants, employees in federally regulated industries and passengers on trains, planes and cruise ships. Jagmeet Singh, the leader of the New Democratic Party, made a similar proposal and even set Monday as a deadline. Erin O’Toole, the Conservative leader, does not support mandatory vaccinations.

As was the case in British Columbia and Quebec, Ontario’s announcement about vaccination proof was immediately followed by an increase in vaccination bookings.

As for the anti-vaccine protesters, there’s no immediate sign that they will follow the advice of Vancouver’s mayor and stay home. But they are probably not who they claim to be. The Ontario Hospital Association said that, contrary to the protesters’ claims in Toronto, it believes “that the majority of participants taking part in these rallies were not health care workers.”