MIAMI — In his 16 years living in the United States, José Antonio Colina, a former Venezuelan military officer living in South Florida, did not get married, have children, or collect too many belongings.

“I own a minimal number of things, so that the moment I can, I can leave without any impediments,” he said. “When there is a new president in Venezuela, and the conditions exist, I will be back there the next day.”

For the first time since he fled his home country in 2003 after turning against Venezuela’s former government, Mr. Colina, 44, thinks that day could be coming soon.

Venezuela is in the throes of a political crisis that has for the first time in years offered some hope to the tens of thousands of people from that country who have migrated to the United States — a number that has nearly doubled since 2010. The United States is now home to more than 300,000 Venezuelans, and the numbers seeking asylum have been soaring.

Thousands gathered in a park outside Miami on Wednesday to rally in support of the president of Venezuela’s National Assembly, Juan Guaidó, who was declared interim president and recognized by political leaders around the hemisphere, including President Trump. People took to the streets in Venezuela to demand the removal of Nicolás Maduro, who easily won re-election last year after his opponents were disqualified and jailed.

[Read a short, simple primer on what’s happening in Venezuela.]

Mr. Maduro has refused to step down, but for the Venezuelans in South Florida and elsewhere in the United States, the arrival of a parallel presidency this week brought a burst of optimism that a government they consider to be a dictatorship could soon be reaching its end.

“At first, you saw pure euphoria,” Mr. Colina said of his fellow expatriates in South Florida. “That transitioned to caution.”

The political dynamics in Caracas could have repercussions for Venezuelans in the United States, many of whom are waiting for decisions on their asylum petitions. Some fear that if Mr. Maduro is forced to step aside, their chances of winning permanent protection in the United States could diminish. 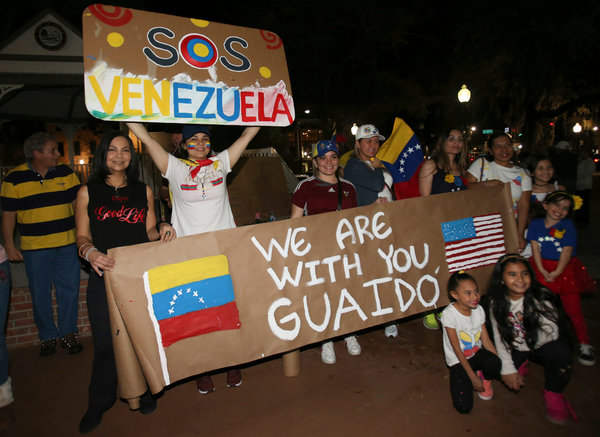 Wealthy Venezuelans have long parked their money in the United States and bought condos in Miami. When former President Hugo Chávez rose to power, they also began settling in Florida by the tens of thousands.

In recent years, Venezuelans of lesser means — teachers, engineers and small business owners — have been fleeing political and economic upheaval under Mr. Maduro and laying down roots in cities as varied as Nashville, Houston and Salt Lake City.

The vast majority of them entered the United States on tourist visas and then applied for asylum. The biggest number live in Florida, home to about 200,000 Venezuelans.

Samuel Toledo, 30, a Venezuelan journalist, arrived in the United States in March 2017 and was granted asylum about a year later. He now works as a reporter at Univision, the Spanish-language network, in Miami.

“The situation in every aspect — economic, political and social — is very serious. The most affected are the people,” he said, with shortages of food, medicine and other basic items making life in Venezuela increasingly intolerable. The currency has been devalued to the point that many can’t collect enough money to leave, he said. “There are people heading on foot for the borders because they can’t afford a plane ticket.”

Venezuelans have watched with anticipation and trepidation as Mr. Chávez and Mr. Maduro have survived one blow after another — and Venezuela has sunk further into hyperinflation and chaos.

“This is the closest we have ever come to actual change,” said Helena Poleo, who came to Florida in 1999 for college, but wound up staying when Mr. Chávez’s administration meddled with the newsprint supply her family’s newspaper needed.

She attended the South Florida rally this week, is constantly seeking updates on Twitter, and feels a pang of guilt for the safety she enjoys from the comfort of South Florida.

“It’s very difficult,” she said. “There’s not one hour of my time that goes by where Venezuela is not an issue on my mind.”

Last year, more than 2,000 Venezuelans a month applied for asylum, according to U.S. Citizen and Immigration Services statistics, each month topping the global list of applicants. A 2016 federal report showed that the number of Venezuelans who applied for asylum had risen 19-fold in just four years.

But only a few hundred each year have been granted the protection, according to Transactional Records Access Clearinghouse, a Syracuse University database that collects immigration data.

Venezuelans have also been caught up in the Trump administration’s stepped-up security on the Southwest border. Many families, immigrant advocates said, have journeyed through Mexico to the United States, only to be detained by American authorities at ports of entry after requesting asylum.

“We are concerned that people are going to be denied asylum and end up being deported,” Maria Liliana Azevedo, the vice president of the Venezuelan American Association of Utah, a state where the number of Venezuelans has grown from 3,000 in 2012 to about 12,000.

“Our mandate changed, from a group that gathered to socialize to one dealing with an exploding population of Venezuelans,” said Thomas Reams, its treasurer.

Five members of Venezuela’s Supreme Court, who said they fled their country after President Maduro threatened to lock them up, met with exiled Venezuelans in Salt Lake City on Wednesday. But no one was ready to predict what would happen next — and many have been focused on building new lives in the United States.

Maxo García, 51, who had been a dean of mathematics in the Maracaibo school district in Venezuela, sought refuge in Utah in 2016 after facing threats for criticizing the Maduro administration. Now he works at a warehouse in Salt Lake City assembling outdoor sheds. Last summer, he bought a 1,500-square foot home in a blue-collar suburb outside the city.

He is relieved to be in the United States, he said, but will be in limbo until his asylum application, and that of his 21-year-old daughter, are decided. The two of them, for now, are on their own: His wife tried to follow him to the United States in 2017, but was prevented by American authorities from boarding her flight.

“I am grateful that this country opened its doors to me,” Mr. García said. “My daughter and I are safe, but my heart is split in two because my wife is there.”