Mr. Jones, a former state representative and head of government in DeKalb County, tweeted on Thursday that he would formally introduce his candidacy at a news conference the next day, saying that “we need a fighter for Georgia.”

Mr. Trump has not endorsed a primary challenger to Mr. Kemp, who is seeking a second term in office. But the former president has vowed to return to Georgia to campaign against the governor, a former ally, to punish him for rebuffing Mr. Trump’s entreaties late last year that he work to overturn Georgia’s election results.

Mr. Trump lost the Georgia race by roughly 12,000 votes, a result that was certified by Republican state election officials after two recounts. But he remains popular among members of the party’s base, and their willingness to punish his Republican enemies in 2022 may be an important early sign of his sway over the party heading into the next presidential cycle.

Mr. Jones, 60, has a complex and controversial history in Georgia politics, and it is unclear if his entry into the race will turn out to be a serious threat to Mr. Kemp. But his candidacy guarantees that Georgia Republican voters will be forced to reckon with the ugly fight between Mr. Kemp and Mr. Trump as they choose a standard-bearer for the November 2022 general election.

Mr. Jones seems eager to emphasize the feud. “If it weren’t for Brian Kemp, Donald Trump would still be President of these United States,” he tweeted in March, saying he was “looking closely” at a primary challenge. “We need courageous conservatives leading our state, not those afraid to stand up to the Radical Left.” 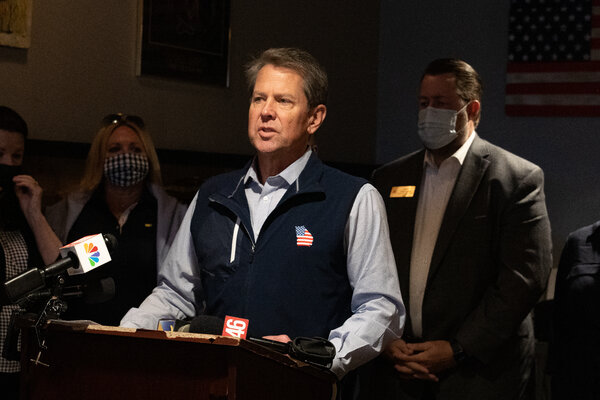 If Mr. Jones can earn an endorsement from Mr. Trump, his campaign will most likely force Mr. Kemp to expend precious money and energy in the G.O.P. primary. And that could benefit Democrats, many of whom are expecting another run by Stacey Abrams, the former state House minority leader who narrowly lost to Mr. Kemp in 2018.

Ms. Abrams’s stature has only grown since then; as a leading voting rights advocate in Georgia and nationwide, she helped engineer upset victories for Democrats in the presidential election and Georgia’s two Senate races early this year.

Mr. Jones is a native of North Carolina who formerly worked as a telecommunications executive. He served for eight years, starting in 2001, as chief executive of DeKalb County, a populous suburb of Atlanta, where he oversaw significant economic development initiatives and capital improvements, and often commanded the local political spotlight with a mix of folksy charisma and domineering style.

He was also trailed by controversies, some of which were detailed in an article last summer in The Atlanta Journal-Constitution that recapped his career. These included an accusation of rape (which Mr. Jones denied, and was never charged with); an allegation in a lawsuit that he had tried to replace white managers of the county parks department with Black ones; and claims of lavish spending on his security detail.

The newspaper reported that a special grand jury looking into corruption in DeKalb County government had found “incompetence, patronage, fraud and cronyism,” and recommended investigations of Mr. Jones and other county officials. But prosecutors eventually said they found no evidence of wrongdoing by Mr. Jones.

Mr. Jones’s time as the powerful leader of DeKalb County was book-ended by stints in the state legislature. He also ran unsuccessfully for the U.S. House and Senate, and for DeKalb County sheriff.

Mr. Jones, a longtime Democrat, announced he was joining the Republican Party in a Jan. 6 tweet. But he has exhibited a streak of political heterodoxy throughout much of his career. At various times, Mr. Jones supported both George W. Bush and Barack Obama. He has kept a picture of the Confederate general Robert E. Lee in his office, and has also sought to remove the Confederate battle flag symbol that once adorned the Georgia state flag.

He has championed the “flat tax” concept championed by many conservatives — but as a state representative, he also voted against a Republican-backed abortion bill in 2019 that effectively banned the procedure after six weeks of pregnancy.

The so-called fetal heartbeat law was struck down by a federal district court and is currently on appeal. But Mr. Jones’s opposition to it could prove to be a dealbreaker for evangelical Christians who are a key component of the Georgia Republican base.

On Monday, Mr. Jones, apparently anticipating attacks on the vote, staked out an unequivocal anti-abortion position, tweeting: “Life begins at conception – period. And it should be protected from that point and that point forward.”

Mr. Kemp has also been working to improve his standing among conservatives. Last month, he signed a major bill restricting voting in the state. Democrats said the law would adversely affect many Black voters, calling it “Jim Crow 2.0,” an assertion Mr. Kemp has denied.

A recent Morning Consult tracking poll showed that Mr. Kemp’s approval among Georgia Republicans had increased from 62 percent on March 25 — the day he signed the voting bill — to 74 percent on April 6.

For his part, Mr. Trump has endorsed another loyalist for statewide office in Georgia, Representative Jody Hice, who is challenging Georgia’s secretary of state, Brad Raffensperger, in the Republican primary. Like Mr. Kemp, Mr. Raffensperger is a Republican who infuriated the former president when he declined to bend to Mr. Trump’s pressure to overturn the state’s election results.