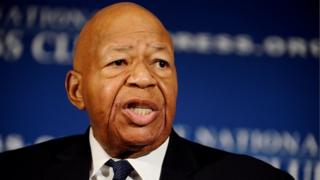 Veteran US Democratic congressman Elijah Cummings, who was heavily involved with the Trump impeachment inquiry, has died at the age of 68.

His office said he died due to “longstanding health challenges”.

As chairman of the House Oversight Committee, Mr Cummings instigated several investigations into the Trump administration.

Earlier this year, he clashed with the president over the controversial detention of immigrants.

The congressman had several health problems in recent years, and received treatment for his heart.