The Confederacy statue of General Robert E Lee has been taken down in Richmond, Virginia, after years of legal battles and campaigns.

Crowds gathered at the roundabout on Memorial Avenue on Wednesday to watch work crews removing the enormous monument from a giant pedestal where it had towered over Virginia’s capital city since 1890. 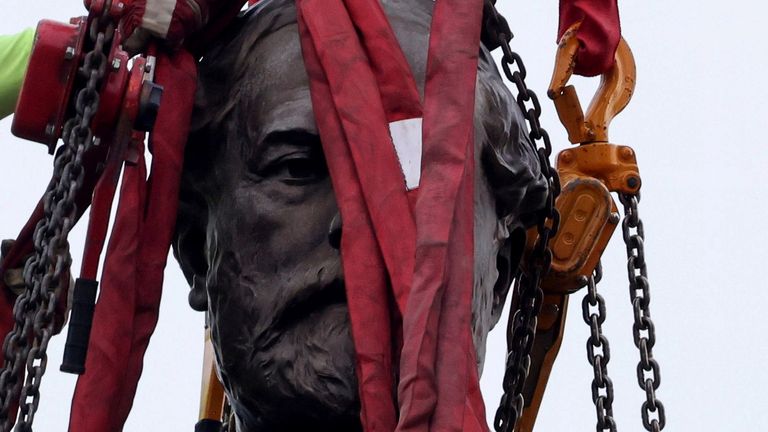 Cheers erupted as the piece – a six-metre bronze equestrian sculpture that is one of America’s largest monuments to the Confederacy – was lifted away just before 9am.

The statue is expected to be cut into pieces so it can brought to a secure location to be stored until its final disposition is determined.

It comes after Governor Ralph Northam ordered the statue to be pulled down last summer in the wake of George Floyd’s death in Minneapolis.

However, Mr Northam’s plan became tied up in litigation until a recent court ruling paved the way for the statue to be removed.

It had stood among four other massive Confederate statues on the avenue but the city removed the others last year.

The area surrounding the monument became a hub for protests against racism, seeing the occasional clash between police and demonstrators. 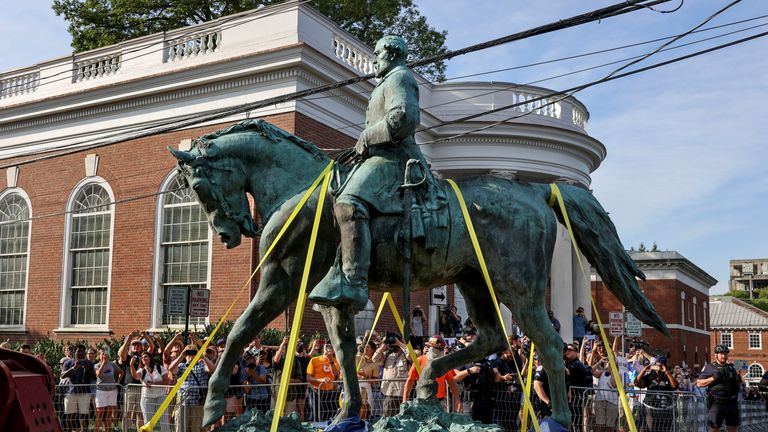 A crowd of about 200 people watched the statue getting taken down on Wednesday, chanting “What do we want? Justice. When do we want it? Now.”

Black Lives Matter signs were seen in the crowd while the crowds chanted, “Whose streets? Our streets,” and sang, “Hey hey hey, goodbye.”

Rachel Smucker, 28, a Richmond resident who was among the crowd said: “This is a historic moment for the city of Richmond.

“The city, the community at large is saying that we’re not going to stand for these symbols of hate in our city anymore and it was important for me to be here to see this historic moment.” 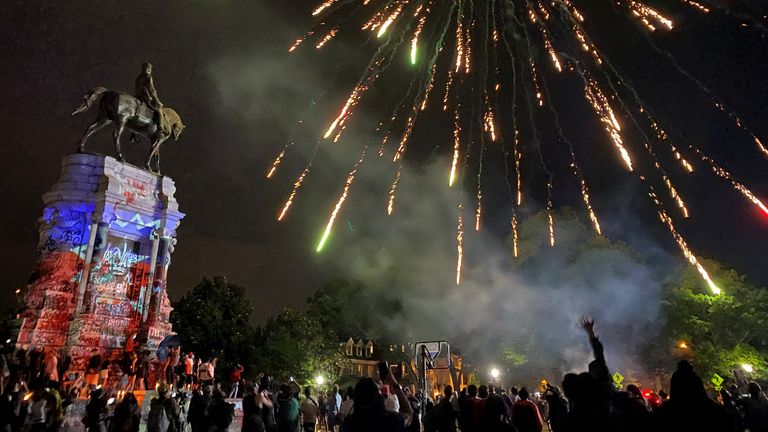 “I’ve always found it to be offensive, as a symbol of protecting slavery and the racism that people of colour still face today,” Ms Smucker said.

On announcing the removal plan in June 2020, Mr Northam said: “We put things on pedestals when we want people to look up.

“Think about the message that this sends to people coming from around the world to visit the capital city of one of the largest states in our country or to young children.”

The decisions by the governor and Richmond Mayor Levar Stoney to remove the Confederate tributes marked a major victory for civil rights activists, whose previous calls over the decades to remove the statues had been rebuked by city and state officials.

Resistance and protests to similar statues have been seen across the US and the world, resulting in some being taken down.

On Monday, Mexico City announced it would be replacing a statue of Italian explorer Christopher Columbus with one of an indigenous woman.

In Virginia, local governments had been hamstrung by the state law that protected memorials to war veterans until the Democrat-majority at the statehouse voted to amend it.