Even had she not raised more money than her rivals, Tali Farhadian Weinstein would be a formidable candidate in the nine-way race to become the Manhattan district attorney, perhaps the most high-profile local prosecutor’s office in the country.

She was a Rhodes scholar, has an elite legal résumé and is the only candidate who has worked for both the Justice Department and a city prosecutor’s office. And while most of the candidates are campaigning as reformers intent on reducing incarceration, Ms. Farhadian Weinstein, 45, has staked out a slightly more conservative position, expressing concerns about guns and gangs.

But what most sets Ms. Farhadian Weinstein apart from the field is her fund-raising. As of January, she had raised $2.2 million, far more than her competitors, hundreds of thousands of it from Wall Street, where her husband is a major hedge fund manager.

Her opponents, legal ethicists and good government advocates have raised questions about that support, pointing out that the Manhattan district attorney, by virtue of geography, has jurisdiction over a large number of financial crimes.

“It’s very difficult to see how a Manhattan D.A. candidate can accept really large and numerous donations from people who are involved in industries who could easily be the subject of that office’s attention,” said Susan Lerner, the executive director of Common Cause New York, a government reform group.

Ms. Farhadian Weinstein, who is married to the wealthy hedge fund manager Boaz Weinstein, says the donations will not influence her judgment on prosecuting cases. She notes she has not received large sums from criminal defense attorneys.

“Judge me on my record,” she said. “I’ve gotten every job I’ve ever had on my own and I’ve never done a favor for anyone.”

Much of Ms. Farhadian Weinstein’s campaign war chest came from a small group of donors in the hedge fund industry. The founder of Pershing Square Capital Management, William A. Ackman, and his wife have contributed $70,000 to her. Kenneth Griffin, who founded Citadel, gave Ms. Farhadian Weinstein $10,000, and his colleague Pablo Salame, the head of global credit at Citadel, donated $35,000.

She also received $70,800 from the founder of PointState Capital, Zach Schreiber, and his wife, as well as $55,000 from Michael Novogratz, formerly of the Fortress Investment Group, and his wife. 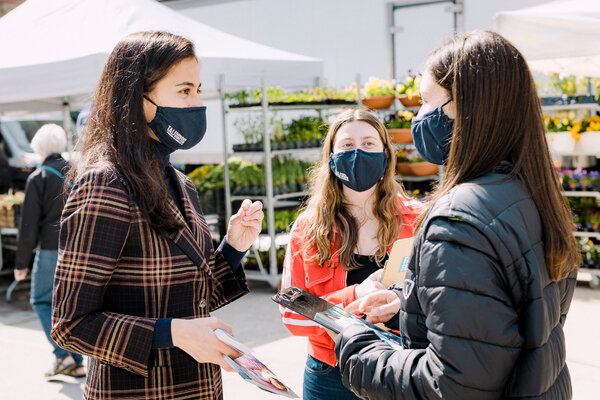 The flood of money from financiers into Ms. Farhadian Weinstein’s coffers has been reported by other news outlets, most recently Gothamist. It gives her a significant advantage in the race, which is likely to be decided by a narrow margin during the Democratic primary in June.

She has plastered Upper Manhattan with expensive mailers and has hosted high-profile guests on a podcast to promote her candidacy, including the author Malcolm Gladwell and two U.S. senators — Cory Booker of New Jersey and Kirsten Gillibrand of New York.

The heavy support from New York’s ultrawealthy in finance has surprised longtime campaign consultants watching the race, including some working on behalf of her opponents.

George Arzt, a onetime adviser and campaign spokesman for Robert M. Morgenthau, who was Manhattan district attorney for decades, said he had “never seen such eye-popping numbers for individual donations in a D.A.’s race.” Mr. Arzt is currently working with another candidate, Liz Crotty.

“Whatever happened to the sheriff of Wall Street?” he added.

‘She was not a shrinking violet’

Ms. Farhadian Weinstein came to the United States in 1979 as a 4-year-old, the daughter of Jewish parents from Iran who fled the revolution and applied for asylum.

The uncertainty she felt as a young person, knowing the government could change her life at any moment, affected her career path, she said.

“I think now there was always an impulse to be on the other side and to be a decision maker,” she said.

After graduating from Yale Law, she was offered clerkships with Merrick B. Garland, who was then a judge on the U.S. Court of Appeals for the D.C. Circuit, and with Justice Sandra Day O’Connor on the Supreme Court. At the U.S. Department of Justice, she worked as a counsel under Attorney General Eric H. Holder Jr., who remembers her as a fierce debater.

“She had really good judgment and the guts to challenge people at the Justice Department,” said Mr. Holder, who has endorsed Ms. Farhadian Weinstein. “She was not a shrinking violet.”

Ms. Farhadian Weinstein’s courage was tested when, as a federal prosecutor pregnant with her third child, a defendant charged with murder threatened to hire someone to kidnap her and cause her to lose the pregnancy.

For weeks, federal marshals had to escort her. She was told she could come off the case, if it would make her more comfortable, but she stayed on until the baby was born.

Later, Ms. Farhadian Weinstein served for several years as the general counsel to the Brooklyn district attorney, Eric Gonzalez, one of the most progressive local prosecutors in the country.

Still, she has tacked to the right of her competitors in the race for Manhattan district attorney. She has been less prone than several of her rivals, for instance, to pledge that she would not prosecute certain categories of low-level crime.

“It’s very easy and simplistic to insist on bright-line rules,” she said. “The hard work of prosecutorial discretion is having policies but also allowing for discretion to do justice in individual cases.”

The possibility of conflicts

The Manhattan district attorney’s office has long overseen many investigations into wrongdoing in the worlds of finance, real estate and other lucrative industries based in the borough. Mr. Morgenthau, the predecessor of the current district attorney, Cyrus R. Vance Jr., was known for taking a particularly tough line against white-collar crime.

She brushed off the suggestion the donations from people in finance might create such conflicts if she were to win.

“Anybody is a would-be witness or target or a subject of an investigation,” she said. “That’s diffuse.”

Some of her opponents disagree. “By running a campaign that’s so tied to Wall Street, Ms. Farhadian Weinstein has put herself at a real political and frankly ethical disadvantage,” said Jamarah Hayner, the campaign manager for Tahanie Aboushi, who is running on a platform to shrink the size and power of the district attorney’s office.

Stephen Gillers, a law professor at New York University and an expert in legal ethics, said in an interview that while Ms. Farhadian Weinstein had violated no ethics rule, she should not have accepted the donations.

“The fact that this is the Manhattan D.A. and Manhattan is the financial capital of the country if not the world says to me that this candidate should not be raising large sums from hedge fund interests,” he said.

All told, Ms. Farhadian Weinstein has received at least 21 donations of $30,000 or more. (The maximum allowable is about $38,000.) Her opponent Alvin Bragg, who was the runner-up in the money race in January, when candidates last filed disclosures, had received only two donations of that size. Ms. Aboushi had received only one similarly hefty donation, from the professional basketball player Kyrie Irving.

Leaders at her husband’s fund, Saba Capital, have collectively given Ms. Farhadian Weinstein more than $105,000.

Judge Lippman said in an interview he did not anticipate Mr. Weinstein’s business would create conflicts of interest, but he laid out steps she could take to ensure any potential investigation would remain independent. He did not look closely at Ms. Farhadian Weinstein’s fund-raising, but said he did not find it unusual or concerning. “It goes with the terrain of running for public office,” he said.

Zephyr Teachout, a lawyer and former candidate for governor who has worked extensively on public corruption matters, said the Wall Street money Ms. Farhadian Weinstein had amassed “raises all kinds of red flags.”

“It’s really problematic and distorting to have so much Wall Street cash in this race because the D.A. is responsible for enforcing white-collar criminal law in Manhattan,” she said. “We are talking about an enormous amount of money that common sense tells you has the power to shape judgment.”