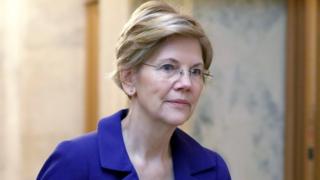 US Democratic Senator Elizabeth Warren has announced that she is establishing an exploratory committee to consider a presidential run in 2020.

The move, the first by a high profile Democrat for 2020, allows Ms Warren, 69, to ramp up her fundraising.

In October, Ms Warren revealed the results of a DNA test she said proved her Native American heritage after she was taunted by President Donald Trump.

It immediately sparked speculation that she would run for the presidency.

In a video address posted on social media on Monday, the progressive Massachusetts senator outlined her vision for a United States that she said would offer opportunities to all Americans.

Every person in America should be able to work hard, play by the same set of rules, & take care of themselves & the people they love. That’s what I’m fighting for, & that’s why I’m launching an exploratory committee for president. I need you with me: https://t.co/BNl2I1m8OX pic.twitter.com/uXXtp94EvY

“Every person in America should be able to work hard, play by the same set of rules, and take care of themselves and the people they love,” she said.

“That’s what I’m fighting for, and that’s why I’m launching an exploratory committee for president. I need you with me.”

She has frequently faced attacks from the White House and Republicans over whether she used claims of native ancestry to advance her career.

Earlier this year, Mr Trump described her as a “fake Pocahontas” and challenged her to take a DNA test.

Ms Warren took the test and shared the report in October, along with a video of family and colleagues discussing her heritage.

The DNA report, which was conducted by geneticist Carlos Bustamante of Stanford, concluded that “the vast majority” of Ms Warren’s ancestry is European, but “the results strongly support” a Native American ancestor.

Pocahontas was the daughter of a 17th-Century indigenous chief.