In Northern California, a region troubled by fire, many people with disabilities live in rural areas that lack the resources to support them during disasters.

Chuck Lindahl in his living room at his home in Chester, Calif.Credit…Christian Monterrosa for The New York Times

A mandatory evacuation notice blared from Joyce Lindahl’s phone one day in July as the Dixie fire bore down on her home in Northern California. But her biggest concern was an hour away.

Chuck Lindahl, her brother-in-law, is paralyzed from the neck down, and his professional caregivers live in places where residents had already been ordered to evacuate. If his family also had to leave the area, he would be left alone. “Without caregivers, I’m out of luck,” he said.

Plumas County had a plan for Mr. Lindahl in case of fire, but his home wasn’t in the mandatory evacuation zone yet — and officials needed to focus their limited personnel and rescue equipment elsewhere, the county’s Office of Emergency Services said.

So Ms. Lindahl and her family scrambled to figure out how to safely evacuate her brother-in-law and shelter him on their own.

As wildfires burn with greater size and intensity across the American West, forcing thousands of people to evacuate their homes each year, communities in the danger zone are struggling to protect their disabled and older residents.

This is a particular problem in Northern California, where some of the biggest blazes are now burning, including the Dixie fire, the second largest in state history. The region is home to a significant population of people with disabilities — the percentage in the area is roughly twice the state average — many of whom live in largely rural areas that lack the critical infrastructure and resources needed to support them during disasters. 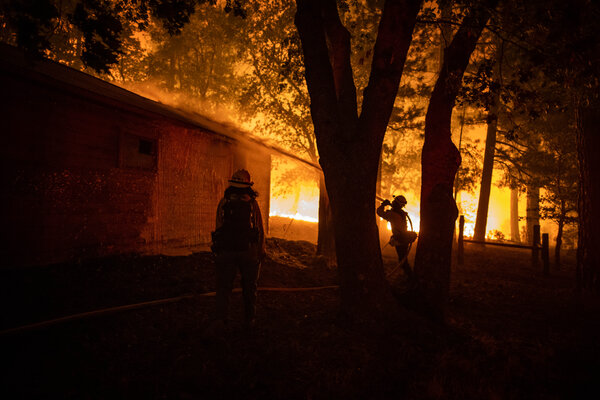 The Camp fire wiped out the town of Paradise in 2018, killing at least 85 people — the majority of whom were older or disabled, according to Butte County data. The next year, a state audit found that the county, which includes Paradise, had not adequately prepared to protect people with “access and functional needs,” and that the California Governor’s Office of Emergency Services had not provided enough guidance to local officials about how to develop emergency plans for them.

Since then, a growing number of California communities have partnered with local disability organizations to develop better plans to alert, evacuate and shelter vulnerable populations. But plenty of weak spots remain, and officials acknowledge that many people could still find themselves in danger.

“We tell people the most important thing is you need to have a plan for yourself,” said Shelby Boston, director of the Butte County Department of Employment and Social Services, which works with people with disabilities. “Even with all of the plans that the county put in place, there is no guarantee that a deputy or law enforcement or fire personnel is going to make it to your door. That’s the reality.”