We’re in the mid-West and we’re about to meet the enigmatic leader of a black militia group that’s become increasingly visible in a year dominated by racial tension in America.

NFAC is one of a number of armed groups, alongside the Boogaloo Bois, Oath Keepers and 3 Percenters rooted and rising in a climate of deep concern and hostility in the US.

But NFAC is exclusively black and the man at the helm, Grand Master Jay, says their methods and motivation are very different to others.

I’ve heard him in the past insist that they’re not protesters or demonstrators, but black militia. There’s still a lot about the group I don’t know though.

Grand Master Jay, won’t send me the address till the night before – he’s very wary of security. 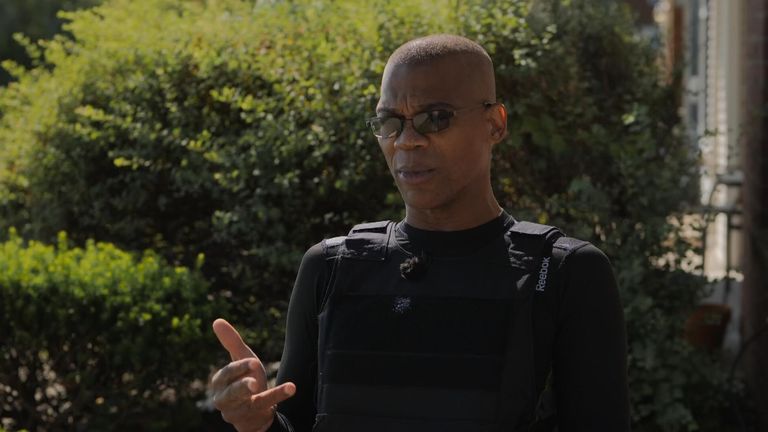 When we arrive at the location the following morning, we suddenly see a figure emerge by a row of neat houses.

He’s dressed all in black, with dark sunglasses, a bandana round his mouth and holding a rifle. It’s an incongruous site against an almost quaint backdrop.

As he walks me round the corner he tells me he’s taking us to a safe house: “One of my jobs is to protect the identity of our members.

“That is why I am the only one that speaks for the NFAC. You have veterans, corporate executives, members that don’t want to have to deal in their personal life with the pressures of being a part of this organisation.”

He won’t disclose the number of people in the group, but says they represent the fourth largest militia in America with chapters across the country.

In Louisville, Kentucky, hundreds of members were seen on the streets in a show of force for Derby Day, an attempt to “hit them in the wallets – where it hurts” he says.

Louisville was where 26-year-old Breonna Taylor was killed by police and inaction in the case has captured the ire of campaigners, celebrities and politicians across the globe. 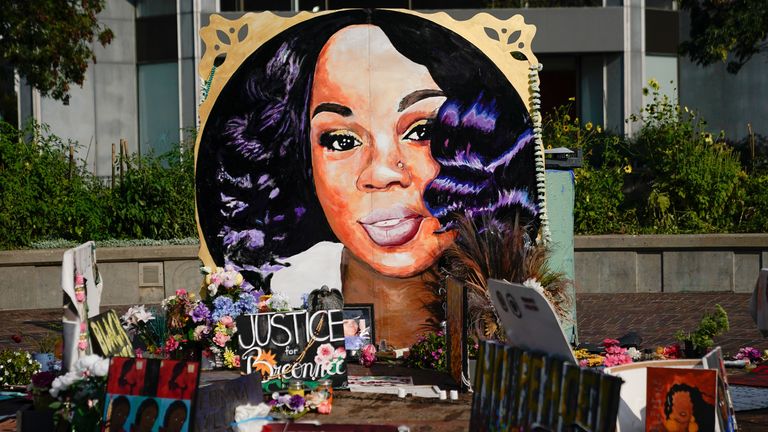 The first public appearance of NFAC was at a KKK rally in Dayton, Ohio, in 2019.

Grand Master Jay told The Atlanta Black Star at the time that the group stood guard to prevent a repeat of the 1979 Greensboro Massacre, in which five people in North Carolina were shot and killed by Nazis and Klansmen as citizens gathered for the start of an anti-racism protest.

Today he tells me the weapons they carry are a “necessity” in an era reminiscent of the 1960s. But he insists unlike some other militia groups, they have not been classified as a terrorist group and none of his members have been charged with crimes. 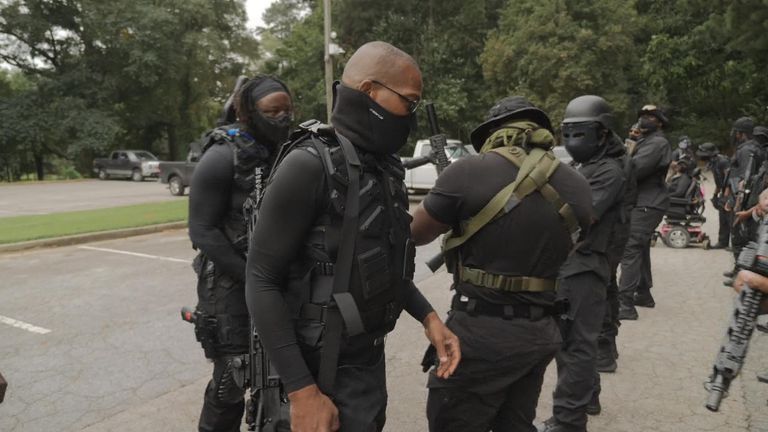 The Southern Poverty Law Center say they are aware of the group, but they, like many others, are still trying to understand it.

Grand Master Jay insists: “Everything that that we’ve done has been within the confines of the constitution. The day that NFAC steps over the line, it will be because the line was already stepped over for us first.”

It’s not simply the incidents he says that drive his group to act, but the aftermath of how cases of police brutality and racial injustice are dealt with. 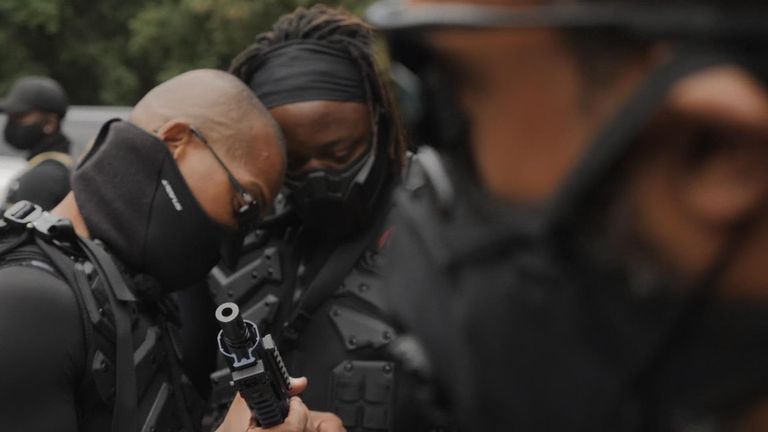 “It’s not just the fact that they shot us is that once we’re shot, as in the case of Breonna Taylor, there’s this feet dragging. And there’s this lack of sense of urgency.”

But he does believe they’ve peacefully helped achieve progress in Louisville where the former emergency room technician was killed.

Her family is due to receive a $12m (£9.4m) settlement and a grand jury decision on whether or not to indict the there officers involved is due any day now.

Grand Master Jay says they will respect the legal process even if the news is not what they want to hear. In fact, he maintains they’ve been in close contact with city officials throughout.

But they are also a militant, separatist group demanding change, “with or without force”. 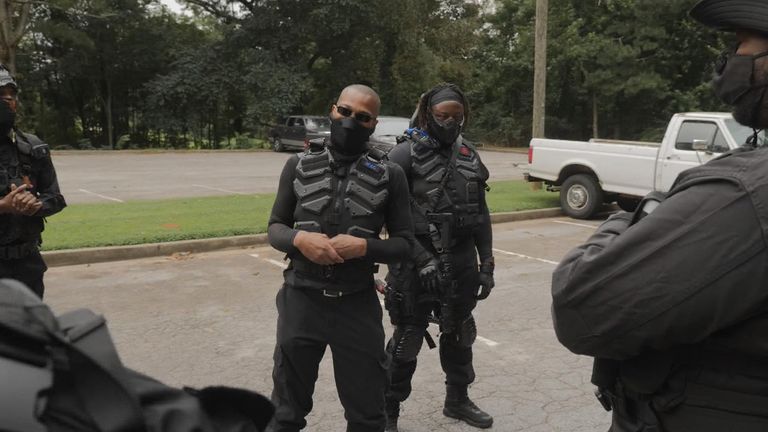 Whilst he says they’ll try to work within the system, they’re also open to “building their own nation” if that system won’t accommodate change.

Once a DJ and producer, in 2016 he campaigned as an independent presidential candidate.

Now he says he won’t vote and he’s grown tired of the Black Lives Matter movement too, convinced it’s been “infiltrated by Antifa and anarchists” bent on destroying not achieving anything. The network is very broad and many within it firmly refute that claim.

As the only member of NFAC sanctioned to speak, it’s hard to get a read on what others members think. But at the end of the interview Grand Master Jay suddenly invites us to film what he describes as a “mini-formation” in Atlanta.

He’s going there to attend a funeral of a well known black activist from another group and the formation is there to protect him. It’s also a chance for us to get a glimpse of how others see him.

In a car park at 10am, about 25 men and women, are dressed in full black fatigues, dark masks covering most of their faces and all carrying long arms or handguns.

Grand Master Jay has a commanding presence over them, charismatic and stern, whilst also trying to make hushed jokes as he inspects their weapons. They seem focused and fond of him – but it’s very hard to know when we can’t interview them.

As he addresses the group, he declares: “You know what our rules of engagement are right? We don’t point our weapons at nobody. Unless they point them at you… and if they do…”

The group resoundingly replies: “Kill them.” It’s a reminder of what they’re willing to do under the guise of self-defence.

With things as febrile as they are, it’s easy to imagine a sudden shift that might push them to that.

But aside from the intimidating impact of their outfits and arms, we never heard talk of starting or inciting violence.

It did though seem relatively organised and infuriated by inequality, determined to make their presence felt. In a deeply splintered America, it’s easy to imagine many more like them emerging.