Democrats would love to defeat Gov. Ron DeSantis of Florida in November. But first they must nominate a capable challenger, in a state where they seem to perpetually fall short. 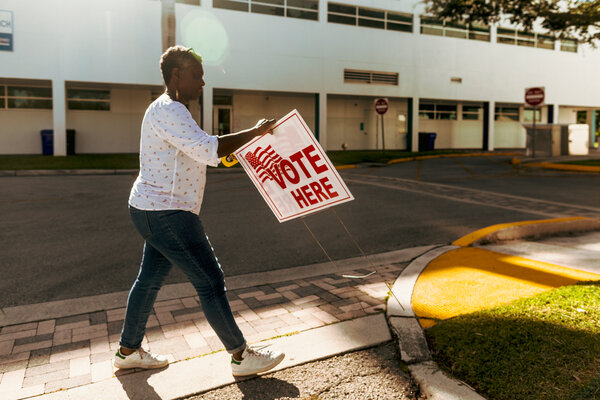 HOLLYWOOD, Fla. — On the first day of early voting in Broward County, Florida’s Democratic mecca, Jared Brown, a 41-year-old lawyer who until recently had never attended a Democratic Party meeting, drove to the polls in suburban Hollywood, slipped on a party T-shirt and grabbed a clipboard to go knock on voters’ doors.

He was motivated by anger.

Anger at Republicans in general — for appointing conservative judges, redirecting money from public schools and governing in a way that struck him as “authoritarian” — and anger at one Republican in particular: Gov. Ron DeSantis, whose polarizing persona has come to suck up all of the state’s political oxygen.

“It’s too offensive,” Mr. Brown said of the culture wars stoked by the governor and state lawmakers. “If you don’t fight them now,” he added, “it’s just not going to get any better.”

Going into Tuesday’s primary election, Florida Democrats like Mr. Brown are angry, especially at the ascendant Mr. DeSantis and the way he seems to them to act like someone who already has his eye on the White House. But it is not clear that in the choices they have to challenge him — Representative Charlie Crist, who served as governor from 2007 to 2011, and Nikki Fried, the state’s agriculture commissioner — they have someone who can beat him.

“DeSantis is running for president,” said Ann Ralston, 69, as she prepared for a long, sweaty day volunteering for no fewer than seven down-ballot Democratic candidates, whose logos she had pinned on her clothes, turning herself into a human billboard. “It’s a foregone conclusion,” she said.

Ms. Fried and Mr. Crist have each cast themselves as the more viable alternative and the truer Democrat, but each is defined as much by their perceived limitations as their strengths: Mr. Crist for already losing two statewide races, and Ms. Fried for her short time in public life.

To win, Democrats are fighting history as well as themselves. After four election cycles of close losses, the national donors whom they need to help finance expensive statewide campaigns appear unengaged this time. So do some voters.

“It’s an emotional narrative about Florida,” said Andrea Cristina Mercado, the executive director of Florida Rising, a racial justice organization. “‘Florida has broken my heart too many times.’”

Money usually flows into the state after the primary. But this year, she worries that Florida is not even on some donors’ radar.

“The right wing says every chance they can that ‘Florida is red, Florida is red,’ and it seems that Democrats are buying into that,” she said, noting that people who live in the state know it feels more closely divided than it looks.

“We don’t want DeSantis to just walk into the White House,” she added. “We’re trying to do what needs to be done with Scotch tape and paper clips.”

Whether Democrats nominate the more disciplined happy warrior Mr. Crist or the more unpredictable, feisty Ms. Fried might matter less than the state party’s longstanding problems. The failings have been clear for years — a thin candidate bench, weak party infrastructure, undisciplined messaging, mounting losses with Latinos — but leaders have struggled with how to address them. Last year, the number of active voters registered as Republicans surpassed Democrats for the first time in history, and the G.O.P. edge has only continued to grow.

Manny Diaz, the executive director of the Florida Democratic Party, said in an interview that since taking over in 2021, he had built an internal voter database, trained volunteers and created a detailed county-level campaign plan. Michael R. Bloomberg, the former New York mayor, who is friendly with Mr. Diaz, recently gave the party $1 million, which is far less than the tens of millions Mr. Bloomberg spent in Florida two years ago.

“I’m confident that we will get funding,” Mr. Diaz said.

In 2018, Mr. DeSantis defeated Andrew Gillum, who would have become Florida’s first Black governor, by about 32,000 votes — less than half a percentage point — making the state a rare bright spot for Republicans. Some Democrats concluded that they would have won with a more moderate candidate, a hypothesis that Mr. Crist would now test. Others insisted that they only came as close as they did because of the excitement surrounding Mr. Gillum. Ms. Fried would be Florida’s first female governor.

For now, Democrats’ most buzzy statewide candidate is Val B. Demings, the Orlando congresswoman challenging Senator Marco Rubio, a Republican. Ms. Demings and Mr. Rubio have already attacked each other in ads, and recent Democratic polls have shown the race to be close, though Mr. Rubio is still considered the favorite.