Memorial Day had a special significance a year after many ceremonies honoring the nation’s fallen were canceled because of the pandemic.

A day set aside to honor the sacrifices of the nation’s veterans, Memorial Day 2021 was especially poignant a year after many memorial ceremonies — and many family trips and barbecues — were curtailed because of the coronavirus pandemic. Parades that had been canceled in 2020 were back in 2021. Services held online last year resumed in person this year. Holiday traffic returned, as did beach outings — at least in parts of the country not cursed with cold, rainy weather.

President Biden honored the fallen at Arlington National Cemetery, delivering an emotional speech under a blue, sunlit sky just a day after the five-year anniversary of the death of his son Beau, who had served in Iraq. “It can hurt to remember, but the hurt is how we feel, and how we heal,” Mr. Biden said after placing a wreath at the Tomb of the Unknowns. He called on Americans to keep the fallen members of the military in their minds. “We’re free because they were brave,” he said. 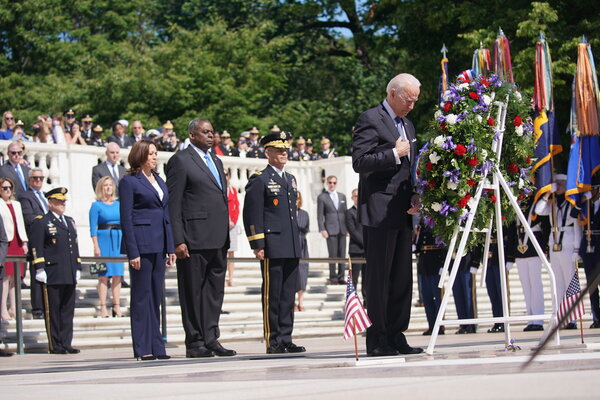 A member of the military stands near the Tomb of the Unknowns before a wreath-laying ceremony at Arlington National Cemetery.

Members of the military are reflected in the Vietnam Veteran Memorial in Washington.

Veterans during a Memorial Day parade in Myrtle Beach.