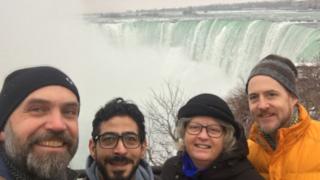 After being stranded in an airport in Malaysia for seven months, a Syrian refugee became the face of the global migrant crisis. How did he end up in Canada?

When it comes to airports, Hassan al-Kontar is something of an expert.

The Syrian spent seven months stranded in Kuala Lumpur International Airport after finding himself caught in a Catch-22 of international refugee law.

But when he landed in Vancouver at the end of November, he knew he was home.

“The minute I put a foot in Vancouver airport, I felt the difference,” he says.

“It was a real moment when I realised that real life can be more beautiful than the dream itself.”

To many of the thousands of people who have followed his story in the news or on social media, Kontar’s arrival in Canada as a permanent resident was the perfect happy ending.

But for him, it is only the beginning.

And the question of what’s next weighs not only on his mind but on the minds of the remarkable team of Canadians who helped rescue him.

Kontar calls them his “three musketeers”. Laurie Cooper initiated the mission, Andrew Brouwer was his legal expert and saviour, while Stephen Watt was the Good Samaritan who visited him in the airport and helped raise awareness for his plight.

Sitting down with all four in Toronto, it’s striking how in person, Kontar is the same earnest yet self-deprecating man whose video diaries from the airport propelled him to international fame.

But after spending 56 days in a Malaysian detention centre, he is noticeably less buoyant – his slim frame has thinned further and the lines on his face make him look older now than his 37 years. 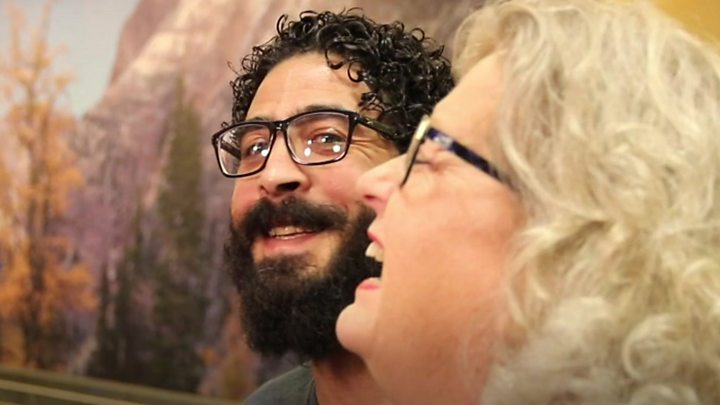 “His vulnerability is clear. I think people overestimate his strength because they just see the funny clips on YouTube,” says Watt.

“We are close. The three of us are close,” he says, eyes watering.

“For the longest time it was just getting to the finish line of getting him here and getting him safe. Now that he’s here, we’re able to just connect as friends… so that’s very, very beautiful.”

Not that there’s been much time for socialising.

The four have been doing non-stop interviews since Kontar landed, in an attempt to raise awareness about the plight of refugees around the world. . He has become a local celebrity in his new hometown of Whistler, where he is often stopped on the street for a selfie or a hearty “welcome to Canada”.

Even his co-sponsor Cooper gained a certain brand of fame when the media homed in on the irresistible detail that she lives in a cabin in the woods, about as far away from the daily horrors of the Syrian conflict as one could get.

My real avenger team. The real heroes and inspiration, the individual who believe they can make a difference. The 3 musketeers who made the impossible possible. We finlay met all together for the first time. My favorite minute so far in Canada. ❤❤??

“I’ve basically been portrayed as the little old lady in the log cabin in Whistler. With the cat,” she chuckles. “And I’m happy with that because I just want to say anyone in Canada can make a difference.”

She first began volunteering with refugees in 2015, when a photo of the drowned body of Syrian toddler Alan Kurdi went viral.

Kurdi had family living near Cooper in British Columbia, and the mother of two adult children suddenly felt a connection to the Syrian refugee crisis she had not had before.

“I wanted to know what I could do to help,” she says. She has since gone on four trips to help out in refugee camps in Greece, and helped privately sponsor 21 refugees from all over the world to settle in Canada.

Canada’s private sponsorship refugee system is what has made Kontar’s rescue possible.

While the Canadian government resettles thousands of refugees every year, it also allows private groups and individuals to sponsor individuals too.

Sponsors are responsible for raising funds to cover the first year of the refugee’s life in Canada, and provide social support.

In 2018, Canada welcomed 18,000 privately sponsored refugees. But because of a backlog, only 8,500 applications are accepted each year. So the BC Muslim Association, which has a sponsorship agreement with the government, stepped in to give one of its spots to Kontar.

It typically takes years for a sponsorship application to be reviewed.

But Kontar didn’t have years. He had arrived in Malaysia in 2017 after getting kicked out of the United Arab Emirates when he overstayed his work visa.

Malaysia is one of the few places in the world that allows Syrians to enter the country without a visa, but it limits their stay to 90 days.

When that grace period expired, he tried to enter Ecuador and then Cambodia, but both countries refused to let him in. He doesn’t know why.

When Cambodian officials confiscated his passport and sent him back to Malaysia last March, Kontar resigned himself to stay in the airport for the long haul.

He feared that if he were to leave, he would be arrested by Malaysian authorities and deported back to Syria, where he could be conscripted into the army or be killed for desertion.

That was when he decided to start to tweet.

Kontar had barely used social media before – prior to 11 March, he only had one tweet and and no Instagram presence. But he was quickly running out of money and needed legal aid, so he used the only weapons he had in his arsenal – his phone and his story.

From the beginning, his video diaries helped connect his own personal predicament to the broader crisis affecting some five million displaced Syria refugees.

“I just want to explain to the world what it feels like to be a Syrian, how it looks like, how it feels like – lonely, weak, unwanted, rejected. No one is accepting us,” he says in one video.

Those initial videos only attracted a few thousand viewers, including Cooper and Watt, who began communication with Kontar via the messaging service WhatsApp. 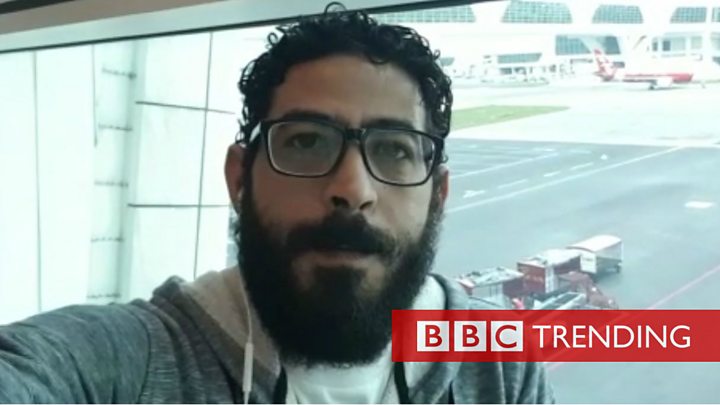 But when an Al Jazeera journalist – also a refugee – sent his story to thousands of journalists worldwide, it took off.

The media blitz caught the attention of Brouwer, a public refugee lawyer in Toronto who offered to help navigate the international refugee system.

But on 2 October, more than six months after Cooper had applied to sponsor him, their worst fears came true.

Kontar was arrested by Malaysian police and taken to a detention centre.

There, he entered what Cooper describes as a “black hole”.

Stripped of his mobile and his eyeglasses, which he needs to see anything farther than a foot in front of him, he felt completely cut off from the rest of the world.

Every day, he says the guards taunted him by telling him he was going on a plane to Syria.

“I’m proud of myself. Even if the Malaysians were going to deport me to Syria, on one part that was okay with me because I did my best,” he says.

“Sometimes it’s better to run into the storm than away from it, he adds.

Meanwhile, Cooper, Brouwer and Watt were busy lobbying the Canadian government and Malaysian officials to let Kontar come to Canada.

And other organisations like Amnesty and Human Rights Watch got involved.

“The Canadian government, finally, it took time but they finally decided to expedite your case,” Brouwer tells Kontar.

“They stepped up, they really did, they moved heaven and earth to get you out of there.”

That day finally arrived when Kontar, handcuffed and flanked by eight guards, arrived on the tarmac at Kuala Lampur International Airport to board a plane to Canada.

At a layover in Taiwan, Kontar broke the news to his 22,000 followers on Instagram.

“The past is no longer with us, what is important is today and tomorrow, the present and the future,” he says.

Ho Ho Ho !!!! ?????.?Anyone who does not love does not know God, because God is love? ?Glory to God in the highest, and on earth peace.? Merry Christmas everyone ❤❤❤ #whistler #canada?? #christmastree #themoststoked

Now living in British Columbia, that future is wide open.

Although a local hotel in Whistler has offered him a job, he is, with the support of Cooper and those that donated to his sponsorship, taking a little break while he figures out what he should do.

He wants to use his story to help raise awareness for refugees. Millions of Syrians are stuck in refugee camps or detention centres around the globe.

Offers to speak at schools about his experience have already started to flood in but he feels too shattered to be inspirational.

“There is a moment when I’m alone when I’m like, I’m done. I’m more total damage than healing,” he says. “I’m afraid I cannot deliver what they are looking for.”

What he really wants people to know is that they can help.

“They are the real heroes,” he says, pointing to Cooper, Brouwer and Watt.

“Because they have options in their lives… parties, music, having a family, raising their kids. Enjoy, live their life. But they decide to take another path, when a human is in need.”

As for Cooper, the “little old lady in the log cabin”, she says if she can save a man’s life, then surely anyone can.

“I think people want to help,” she says. “The one thing I’ve learned from this crisis… is ironically, it has restored my faith in humanity.”