The virus took their mother. Now, as the city reopens, a brother and a sister are rebuilding their lives.

Their mother went into cardiac arrest just before midnight.

She was resuscitated, but the doctor had a question: What did the family want to do if Magalie Salomon’s heart stopped beating again?

The decision was left to Ms. Salomon’s son, Xavier. He was 18 years old.

It was an alarming position to be in, particularly for Xavier, who had never felt much responsibility for the household. His father had died nine years earlier, and his mother worked overnight shifts as a home attendant, which meant he was often home alone with his 16-year-old sister, Adriana.

Still, Xavier felt no obligation to take on a big brother role, preferring to dodge chores and duties. He gave little thought to blowing his Burger King paychecks on Yeezy sneakers or gifts for his girlfriend and tended to hole up in his room on his phone.

But when the hospital called, it was Xavier who was asked for answers.

He panicked. Do whatever it takes, he pleaded.

A heaviness descended on the apartment in Bushwick, Brooklyn. Xavier lay on his bed in the dark, waiting for another call.

When it came a couple hours later, there was the same news, the same question. Xavier repeated his plea. Yes, resuscitate. Save her.

Finally, just before dawn, Xavier received word: Ms. Salomon, 44, died of Covid-19 about 6 a.m. on April 3, 2020, at Wyckoff Heights Medical Center. It had been less than three days since she left their home.

This time, before Xavier hung up, he had his own question to ask:

A kid with no ambition 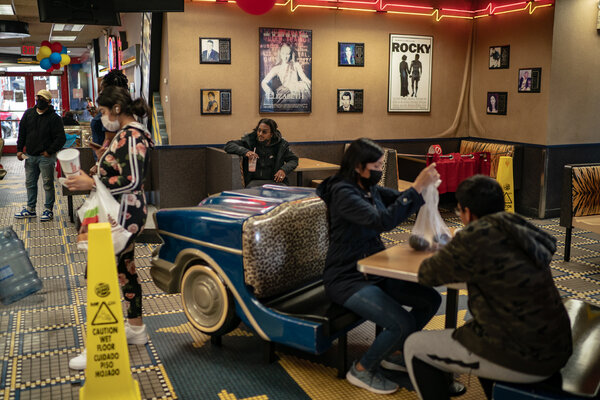 The nation has begun to emerge from the pandemic, but any real return to normalcy must include an acknowledgment of what has been lost. More than half a million have died of Covid-19 across the United States. Nearly 34,000 of those deaths were in New York City, an early epicenter where the virus tore through the crowded landscape.

The collective numbers speak to the scope of the devastation, but each death was an event of its own, a fissure in some intimate world where only the bereft know just how much was broken. The stories are detailed and personal, a different ache to fill in every home.

But woven within that grief are tales of hope and hardiness — of small but brilliant transformations as the city reopens.

In the 14 months since their mother’s death, Xavier and Adriana Salomon have managed to reshape their lives, unearthing courage where there was sorrow. Two teenagers on their own, they have made unsteady but brave steps into the shadows of their parents.

Xavier had been the kind of kid who relied on his charm. Even his mother, who babied him, had told him that he lacked ambition. It was she who befriended the Burger King manager and pushed her son to apply for a job.

“I didn’t have goals,” Xavier recalled. “I think it’s just everything being handed down. I never really had to work at anything.”