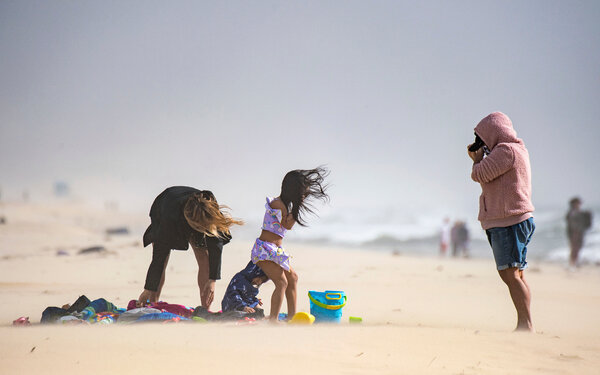 This week, over a quarter of a million people were without power as powerful Santa Ana winds roared through parts of Central and Southern California. The winds were possibly the strongest that the state has seen in 20 years.

Coming off the worst wildfire season in history and in the midst of a dry winter, parts of the Santa Cruz mountains where the CZU Lightning Complex Fire burned over the summer reignited and over a hundred residents were evacuated.

The powerful winds also forced a two-day closure of the Disneyland vaccination site in Orange County and damaged roads and buildings at Yosemite National Park.

A warming climate has caused wildfire season, which typically peaks in late summer, to become a year-round affair in recent years. Wildfires in January just may be the new normal. Here’s what the unusual weather means and what it might portend for the coming months.

This season has been unusually dry. Scientists at U.C. San Diego’s Scripps Institution of Oceanography looked at how much precipitation has fallen and how much is likely to fall in the coming months. At the beginning of January, they found that the odds of California reaching normal precipitation this year were only about 20 percent.

“If we miss the window of December or January, it can really set us back,” said F. Martin Ralph, director of the university’s Center for Western Weather and Water Extremes.

As Dr. Ralph explained, Western states get a chunk of their rain for the year in just a few big storms. Those storms, called atmospheric rivers, carry huge amounts of water from the ocean into inland areas.

The size and frequency of atmospheric rivers make the difference between what will be a normal season or one filled with catastrophic drought or flooding.

“The top storms, how they vary from year to year largely determines whether or not we’re in drought or flood,” Dr. Ralph said.

Right now, we are in need of one of these large storms.

Dr. Ralph said that there could be substantial atmospheric river activity in the coming days and weeks, especially for the northern parts of the state.

Climate change is making extreme weather patterns even more extreme. California has a climate characterized by alternating extremes — drought and floods. And it is already one of the most flood-prone states in the country in spite of also being one of the driest.

Climate models for the years ahead show that the number of dry days will increase but also, the top wettest days each year will become even wetter.

“The wettest of wet days. Well, those are the days of great floods,” Dr. Ralph said.

And while heavy rains during a drought are welcome, we should be careful what we wish for. Floods brought on by atmospheric rivers can be devastating. Dr. Ralph found that in a 40-year period, 84 percent of all flood damage in the Western U.S. came from atmospheric river events, amounting to billions of dollars in damage.

As each week passes without the arrival of major storms, the risk for wildfires increase. “If it ends up being we don’t get any rain in March or April in Southern California that’s a serious problem,” Dr. Ralph said.

Another thing that can affect the outlook for wildfires this year is how spread out the storms are — if they are distributed across a long rainy season or concentrated in just a few closely timed events.

Less rain makes for increased fire risk, but if the rainy periods fall closer to the start of wildfire season, that could be good.

“If we get even a bit less than normal rain, but there’s sort of a wet period later in the spring, it can help suppress the wildfire risk farther into the summer than normal,” Dr. Ralph said.

But right now, there’s a more immediate need for a good soaking.

“Every week that goes by, if we don’t get rain and snow, it’ll be harder and harder to catch up,” he said.

The Times examined 13,000 public school districts across the United States to find out how they were handling the pandemic. In Los Angeles, where classrooms have been closed since March, students and teachers struggle with the lack of human interaction. [The New York Times]

Sacramento is one step closer to eliminating traditional single-family zoning. The proposal, which city officials said would help alleviate the housing crisis, allows for up to four dwellings to be built on a single parcel. [The Sacramento Bee]

On his final day in office, Donald J. Trump pardoned Robert Zangrillo, who was one of dozens of parents accused of conspiring to pay a bribe so that their children would be admitted to the University of Southern California. [The New York Times]

Delays, confusion and shortages have plagued Los Angeles’s vaccine rollout, just as a small group of entertainment insiders were said to have flown to Florida to receive their vaccines. [The Hollywood Reporter]

A rare syndrome that causes inflammation in the body and major organs is increasingly affecting children with Covid-19. Latino children have been hardest hit by the pandemic and make up the majority of youth cases. [CalMatters]

Former Gov. Arnold Schwarzenegger received his Covid-19 vaccine on Wednesday at Dodger Stadium. “Come with me if you want to live!” he said. [Twitter]

Imagine having a dance party with friends, hugging a relative or enjoying a meal in a restaurant again. It could, experts say, help you get out of a funk.

What’s your fantasy for when the pandemic is over, whenever that day might be?