When F.B.I. Special Agent Richard J. Trask took the witness stand in federal court in Grand Rapids, Mich., last week to detail a plot to kidnap the governors of Michigan and Virginia, the prosecutor first asked him what the men involved had in common.

They were all from “multiple militias from different states,” replied Agent Trask, who is a domestic terrorism expert for the Detroit field office.

Nils R. Kessler, the prosecutor, paused on the word “militia,” noting that it meant different things to different people. “These are groups that call themselves militias?” he asked, “But they are not under any government authority or anything like that?”

For decades, federal authorities and academics have described private paramilitary organizations — armed groups who train together on military tactics and techniques — as “militias” or as part of the “militia movement.” But the term has taken on new meaning as makeshift vigilante groups have popped up with increasing frequency in the months leading up to a contentious election.

Once limited to the far-right fringe, the term militia now encompasses a far wider spectrum, representing everything from armed-to-the-teeth neighborhood watch organizations to an all-Black paramilitary group that marches to protest police violence.

The rising visibility of such groups has put a spotlight on the word “militia” itself, with many critics demanding it be replaced. They contend that the term has fundamentally lost its meaning as more groups use it to camouflage threats of violence.

Historically, militias have referred to an auxiliary force raised from the civilian population to bolster the regular army. The issue in the United States, experts said, is that private paramilitary groups have long cloaked their activities in the vocabulary of the American Revolution and the Constitution, creating an aura of legality that does not exist.

“The use of the word militia, any time you are talking about anything other than a state militia like the National Guard, it is just wrong,” said Mary McCord, a former Justice Department official now running an institute that specializes in constitutional law at Georgetown University Law Center. “Using that term without putting ‘unlawful’ in front of it suggests that there is some legitimacy or even constitutional authority for their existence, which there isn’t.” 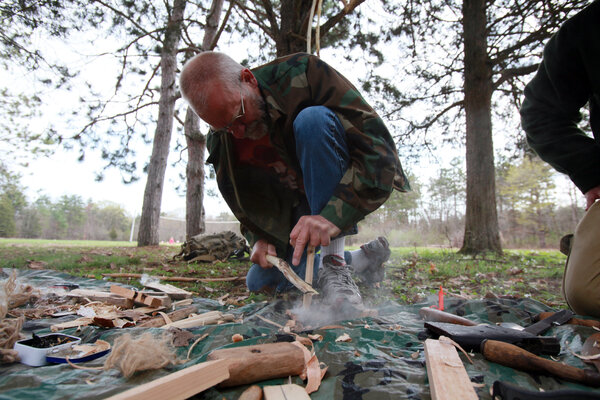 One such group in Michigan, called the Wolverine Watchmen, was at the center of the suspected plot to kidnap Gov. Gretchen Whitmer and other planned violence. Federal and state authorities announced the arrest this month of 14 men linked to the group.

That drew even more attention to the term, escalating demands to label such groups “terrorists.”

Representative Alexandria Ocasio-Cortez, the Democratic New York congresswoman, wrote on Twitter: “Genuine question for the media/law enforcement: why are you calling these armed neo-Nazi groups breaking the law ‘militias’ instead of ‘gangs’ or ‘domestic terrorist groups?’”

Last spring, various anti-government groups condemned the coronavirus lockdown measures as a form of “tyranny” and organized some of the first protests against them. More groups turned out in force during demonstrations against police brutality. Scuffles between protesters and members of armed groups have led to deaths in Kenosha, Wis., Portland and Denver.

There are currently about 181 active, anti-government paramilitary groups in the United States, according to the Southern Poverty Law Center, which tracks them. Some claim thousands of members, but more often their numbers are far smaller, experts said.

American schoolchildren are often taught that Revolutionary War militiamen were heroes. “Patriots formed militia groups to defend the colonies against the British,” reads a brief passage in a 5th grade textbook used in Hillsboro, Ore., “Some militiamen called themselves minutemen because they could be ready at a moment’s notice.”

In addition, the Second Amendment says, “A well regulated Militia, being necessary to the security of a free State, the right of the people to keep and bear Arms, shall not be infringed.” Many groups cite that language to justify their use of the term. But experts note that “well-regulated,” implies state control and not freelance efforts by all comers.

The name “militia” suggests the idea of citizen soldiers and patriotism, plus it lends such groups “the color of the law,” said Mark Pitcavage, a senior research fellow with the Anti-Defamation League’s Center on Extremism.

Underneath that veneer lies a fundamental contradiction, experts noted, with members of the current movement advocating an armed resistance against the very state that the original militias were formed to protect.

It is difficult to pinpoint which group first resurrected the name “militia.” Some historians consider the Ku Klux Klan a militia, and over the past century various militant groups drew on the Revolution for their names.

Its manual stated that any official who disobeyed the Constitution should “be removed by the Posse to a populated intersection of the streets in the township and at high noon be hung there by the neck, the body remaining until sundown as an example to those who would subvert the law,” according to Daniel Levitas, author of “The Terrorist Next Door,” a history of extremist groups.

“Unorganized militia,” a 19th Century legal term, was considered obsolete after the Militia Act of 1903, when federal law began incorporating all legal militias into the National Guard, controlled by state governors. Although the wording differs, all 50 states ban private paramilitary groups that further “civil disorder.”

Fast forward to the early 1990s, when the term gained new life after the violent sieges by federal law enforcement agents against the cabin of Randy Weaver in Ruby Ridge, Idaho, in 1992, and the Branch Davidian compound in Waco, Texas, in 1993.

Those on the far right, already dedicated to the idea of a “leaderless resistance,” concluded that they needed to organize into paramilitary groups to protect themselves from government “tyranny.” Pamphlets appeared with titles like “The Field Manual of the Free Militia” that explained how to establish one.

Using the word “militia” and other historical vocabulary was a deliberate attempt to attract a broader membership, by veiling the often racist, anti-Semitic, anti-immigrant and homophobic origins of such groups, experts said.

“Right-wing extremist organizations try to cloak themselves in heroic garb,” said David A. Neiwert, the author of “Alt-America,” who has tracked such groups for decades. “That is the basis of a lot of the appeal; this is your chance to be a hero.”

But political fights over the Second Amendment kept the movement alive, plus conspiracy theories about a looming foreign invasion never faded entirely. In recent years, the “Unite the Right” rally in Charlottesville, Va., in 2017 marked the first high-profile appearance of such armed groups at protests.

Experts who continue to use the word “militia” said it helps to define a distinct category among adherents of various fringe ideologies or criminal organizations including white supremacists, prison gangs, the tax protest movement, anti-vaxxers, skinheads, survivalists and others.

“Terrorist” was the most popular substitute that circulated on social media, but the legal definition of terrorism refers to organized attacks meant to intimidate or coerce in an attempt to influence government policy. Many experts consider that too broad. The majority of militia members “will never be involved with a terrorist act,” said Mr. Pitcavage.

The term gangs is also considered a poor fit since law enforcement agencies tend to use that to describe violent criminal enterprises. Some experts said they felt like they were under siege by “language police,” over a word they have used for decades.

In Michigan, federal authorities said the plotters discussed putting the governor on trial as a “tyrant,” before Election Day. The case has become an election issue as President Trump has cast doubts on the plot and continued to vilify Ms. Whitmer.

The possibility that armed groups might try to intimidate voters at the polls prompted the Institute for Constitutional Advocacy and Protection at Georgetown Law to publish a legal guide to confront such groups for all 50 states.

“It has all been whitewashed and made safe for broader public consumption by wrapping it in the flag,” said Mr. Neiwert. “They call themselves patriots, although you have never met a more seditious bunch.”