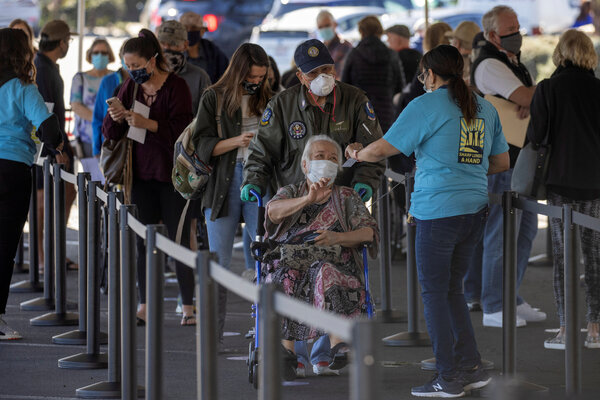 If you’re confused about the state of the virus in California, you’re not alone.

While California’s overall case numbers have been on the decline, hospitals in Southern California are still overwhelmed and experts worry that new variants of the virus — including one that researchers recently found in more than half of samples collected in Los Angeles — could threaten progress curbing Covid-19’s rampant spread.

[Compare coronavirus case numbers, hospitalizations and deaths across California with this map.]

Although The San Francisco Chronicle reported on Saturday that officials in the region were feeling hopeful that the order would be lifted soon, the state’s department of public health reported on Sunday that the Bay Area wasn’t eligible to have restrictions loosened based on its projections.

[See how full hospital intensive care units are near you.]

Gov. Gavin Newsom is expected to make an announcement about lifting some restrictions in the state on Monday.

The Associated Press reported that Mr. Newsom’s administration has refused to disclose key data that would help explain the difference in approaches between the Bay Area and Sacramento.

In any case, the state hinted in a news release on Sunday that Sacramento may be required to re-enter the stay-at-home order, which would force many businesses to shut back down. (We can expect to get an update from state officials in coming days.)

And even after President Biden unveiled what experts have long said is a desperately needed national strategy for finally controlling the pandemic, there are still major hurdles in the vaccine rollout, which in California has contributed to continuing chaos, in which vaccine eligibility rules have been implemented differently county by county.

As CalMatters reported, the state quietly rolled out a promised clearinghouse website to help people find vaccination appointments. But it’s still a work in progress.

[Track the vaccine rollout in California and other states.]

One of the biggest contributors to Los Angeles County’s surge is its overcrowded housing. [The New York Times]

Experts believe as many as thousands of coronavirus deaths have not been counted in San Bernardino County, giving a false sense of the disease’s deadliness. [The Riverside Press-Enterprise]

Fear over testing positive for Covid-19 and not being able to return to work, as well as worries over the vaccines, are hurting the eastern Coachella Valley. [The Desert Sun]

A coalition of more than 50 Bay Area restaurants and wineries sued Governor Newsom over the state’s outdoor dining ban. [The San Francisco Chronicle]

Getting millions of people vaccinated will help reduce infections. But vaccines alone won’t end the pandemic. [The New York Times]

Here’s what else you might have missed over the weekend

If you missed it, Mr. Becerra was tapped to join the Biden administration to lead the Department of Health and Human Services. [The New York Times]

The master tenant of the Ghost Ship warehouse, where 36 people died when a fire tore through the building in Dec. 2016, has pleaded guilty to 36 counts of involuntary manslaughter. [The New York Times]

A Syrian family came to the United States in 2016. Now, they’re hoping to finally be reunited with their son, after the Trump administration’s travel ban has ended. [The San Diego Union-Tribune]

Why Vice President Kamala Harris’s historic “firsts” matter — and where they fall short — according to political science. [The New York Times]

“I’ve been around as long as Joe Biden.” What the president could learn from former Gov. Jerry Brown. [The New York Times]

If you missed it, I talked with Mr. Brown last year about why we should all be paying more attention to the Doomsday Clock. [The New York Times]

Over the weekend, California started getting some much-needed rain, and more is expected. But that raises concerns about mudslides and flash flooding in places that burned last year. [The New York Times]

And if you missed it, here’s why climate change means California will be increasingly whipsawed between weather extremes. [The New York Times]

If you need a morning pick-me-up, the U.C.L.A. gymnastics team has you covered — again — with Nia Dennis’s viral floor routine, featuring music from Kendrick Lamar and Tupac. (California love, indeed.)