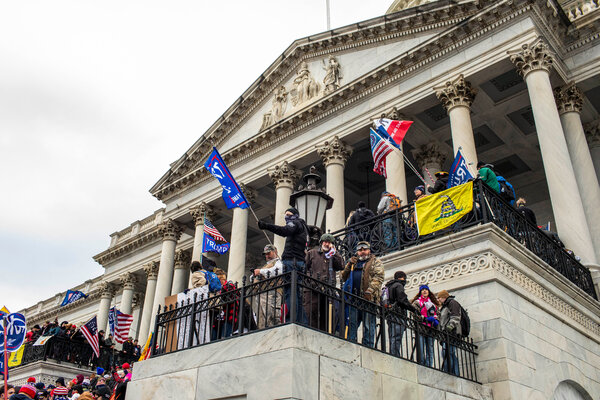 Over the weekend, my colleague Matthew Rosenberg published an in-depth profile of a beloved fourth-grade teacher, Kristine Hostetter, who marched to the Capitol during the Jan. 6 riot.

The story of what happened when she came home is a case study in the ways in which extreme ideologies, often largely developed online, are affecting real-life communities.

It is also a window into the shifting political dynamics of a place that I know well, having grown up and worked as a reporter there: Orange County — and in particular, southern Orange County.

I asked Matt to tell us more about what he learned while reporting in San Clemente.

There have been dozens of arrests and investigations after the Capitol riot. What drew you to the story of Ms. Hostetter in particular?

I was at the Capitol on Jan. 6. A few days later, I was talking to my college roommate, who lives in San Clemente, and he and his wife told me about Ms. Hostetter. At that point, she had just been suspended, and the fight over whether she should be fired was beginning. But even then, it appeared she had not attacked the Capitol.

So it was not an open-and-shut case, and it raised a fascinating question: What do you do about a teacher who has bought into some fairly extreme ideas, but by all accounts has kept it out of the classroom? Do we really want to live in a country where teachers — or anyone, for that matter — are getting fired for their political beliefs?

Ordinarily, that is probably an immediate “no” from Americans. But these are not ordinary times, and what drew me to Ms. Hostetter’s story was its complexity. Her beliefs were personal but hardly private — and had just spurred an attack on Congress. Yet she was apparently great at her job.

I ended up getting pulled into other stories, and did not get out to California until March (I live on the East Coast). By then, the issue of racism and white supremacy had become part of her story, too. Was Ms. Hostetter a racist? The fight had exposed a real divide between those who bought into the expansive definition of racism adopted by the progressive left, and those who saw it as a question of whether she herself had displayed any overt racism — using slurs or treating Black students differently.

So there were a lot of layers — more than in the cases of people who attacked the Capitol. Those are easy. They are criminals.

One of the things that your piece captures really well is the way that Orange County’s particular kind of conservatism — which has been consigned to the margins of California politics for decades — morphed into something different in the Trump era. It seems at once more extreme, more confrontational and also more mainstream. How would you describe what you saw in Orange County?

I think what I saw in Orange County is a phenomenon that is playing out in many places: As a state gets more liberal, its conservatives become more extreme.

Take Arizona, for instance. Like Orange County, it played a central role in the birth of modern American conservatism, producing Barry Goldwater. And for years it was solidly Republican. Not anymore. It now has two Democratic senators, and President Biden won it in the last election.

The state’s Republican Party responded by electing one of its most extreme figures chairwoman, and it went all in on the Stop the Steal campaign. In December, the party retweeted a conspiracy theorist who asked whether Trump supporters were willing to die for the cause. One of its four members of Congress, Paul Gosar, consorts with militia and hate groups — I mean, his own siblings ran ads denouncing him as a dangerous extremist.

It feels like a similar situation is unfolding in Orange County. Conservatives, once ascendant, are losing their stranglehold on power, and some are reacting by going to extremes. And the more extreme they get, the more liberals try to drive them out of public life, which in turn pushes the conservatives further. I am not sure how we break out of that cycle.

How would you put what you saw in San Clemente in the broader national context?

Interviewing people in San Clemente, I got the sense that events of the past year — Covid-19 and the surge in conspiratorial thinking, the George Floyd killing and ensuing civil rights protests, the Stop the Steal campaign and the attack on the Capitol — had all swirled together. Put that on top of the polarization of the Trump years, and it had gotten awfully hard to separate one issue from another.

To many of the liberals, the Trump supporters were pandemic-denying, racist conspiracy theorists (and, to be fair, Ms. Hostetter clearly checked two of those boxes). To the conservatives, liberals were censorious, socialist scolds who wanted to fire anyone who disagreed with them. The through line connecting both sides was that they were viewing the other as caricatures, and their beliefs were being reinforced every time they fired up Twitter or logged on to Facebook.

In reporting this story, did you come up with questions you’re hoping to answer? What will you be tracking most closely?

I am fascinated by how Ms. Hostetter’s husband, Alan, transformed from a cop to a yoga guru to a far-right extremist (and, judging by my inbox, so are a lot of other people). There is a connection between the American yoga and New Age communities and conspiracy theorists that just started getting attention only in the past six to eight months. It is ripe for more exploration.

There is the obvious spectacle of it. But it also gets at the tug of conspiratorial thinking and extremist ideas, both of which seem to be going mainstream at an alarming clip. At the moment, that is largely playing out in conservative circles. But it is not solely a far-right phenomenon.

California is one of the states with the worst disparities in vaccinating its Latino population, despite a statewide mandate meant to target underserved communities. [CNN]

A lawyer for Harvey Weinstein is challenging the disgraced movie mogul’s extradition to California to face charges for sexually assaulting five women. [ABC]

President Biden plans to nominate Chris Magnus, a former police chief from the Bay Area, to be the commissioner of U.S. Customs and Border Protection. [San Francisco Chronicle]

A drought on the border between Oregon and California could lead to cuts in irrigation water to farmers in order to sustain endangered fish species central to the heritage of local tribes. [Associated Press]

Amazon workers at a giant warehouse in Alabama voted decisively against forming a union on Friday, in a blow to organized labor. [New York Times]

Costeaux French Bakery, in Sonoma County, is suing the state for business fees paid because state and local virus restrictions forced the business to close. [The Press Democrat]

The Los Angeles Unified School District is considering extending the next school year by two weeks to make up for lost time learning and to address trauma from pandemic school closures. [Los Angeles Times]

Arclight Cinemas has said it won’t reopen its locations after the pandemic in a crushing piece of news for Los Angeles movie lovers. [New York Times]

In June, we told you a little about Bruce’s Beach, a park in Manhattan Beach that a century ago was a thriving resort owned by a Black couple that became a haven for other Black families looking to enjoy the surf and sand without racist harassment. But white neighbors were intent on dismantling the community.

In 1924, city officials shut down the resort by condemning the land, claiming to need it for a public park.

Recently, as my colleague Jacey Fortin reported, the descendants of the couple, Willa and Charles Bruce, have been advocating to get their land back.

“I just want justice for my family,” Anthony Bruce, 38, who lives in Florida, told Jacey.

The effort has caught the attention of local and state officials, like Janice Hahn, a Los Angeles County supervisor.

“This was an injustice inflicted upon not just Willa and Charles Bruce but generations of their descendants who would almost certainly be millionaires if they had been able to keep that beachfront property,” Ms. Hahn said in a statement.

Now, a state lawmaker has proposed a plan that would allow the land to be transferred back to the Bruce family, according to The Los Angeles Times.