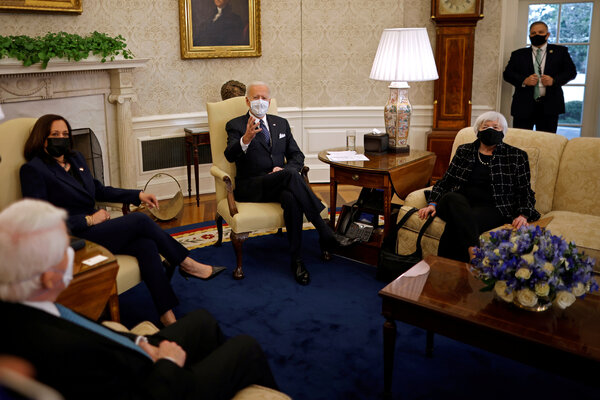 While Washington debates the size of a new economic rescue plan, the bond market is sending a message: A meaningful acceleration in both growth and inflation in the years ahead looks more likely now than it did just a few weeks ago.

That would be mostly good news, suggesting an economy recovering quickly from the pandemic. Interest rates remain very low by historical standards, even for the longest-term securities. Bond prices imply that inflation will be consistent with the Federal Reserve’s target of 2 percent annual rises in consumer prices, not a more worrisome spiral.

But the surge in rates has brought an end to a period of several months when borrowing was essentially free, seemingly far into the future. For the Biden administration and the Federal Reserve, that implies that the free-lunch stage of the crisis is ending, and there could be harder questions ahead.

In particular, it means that the downside of bad policy — federal spending that doesn’t generate much economic activity, for example — is higher than it was as recently as December.

“We’re at a place where the markets are starting to grapple with the question of whether there are trade-offs between more stimulus today and potentially higher rates and more inflation down the road,” said Nathan Sheets, chief economist of PGIM Fixed Income and a former official at the Treasury and the Fed.

The yield on 10-year Treasury bonds — the rate the United States government must pay to borrow money for a decade — was 1.37 percent Monday, low by historical standards but well above its recent low of 0.51 percent in August and 0.92 percent at the end of December. Those higher Treasury rates generally translate into higher mortgage rates and corporate borrowing costs, so the surge could take some of the air out of bubbly housing and financial markets.

The inflation-adjusted interest rate the United States Treasury must pay to borrow money for 30 years was negative for much of the last year, meaning the government would pay investors back less in inflation-adjusted terms than it borrowed. Last week, the rate rose into positive territory for the first time since June and closed at 0.06 percent Monday. (For shorter time horizons, the “real yield” remains in negative territory.)

That’s particularly striking given that Fed officials have repeatedly said they expect the short-term interest rate target they control to be near zero for quite some time — and bond investors appear to believe them. The yield on two-year Treasuries has barely budged in the same span.

What is happening is known as a “steepening of the yield curve,” with long-term rates rising as short-term rates hold still. It tends to presage faster economic growth; it is the opposite of a “yield curve inversion,” which is known as a harbinger of recessions.

But the flip side is that the moment appears to have passed when bond markets were giving the government an all-clear signal to do whatever was necessary to boost the economy, essentially making endless funding available at extraordinarily low cost. That could have implications for how the Biden administration approaches the rest of its economic agenda.

Treasury Secretary Janet Yellen has emphasized that low interest rates, which keep the cost of debt service low, are important in her thinking about how much the government can comfortably borrow and spend.

At The New York Times’s DealBook conference on Monday, Ms. Yellen, after noting that the government’s ratio of debt to the size of the economy is much larger than it was before the global financial crisis, said: “Look at a different metric, which is more important, which is what is the cost of that debt. Look for example at interest payments on the debt as a share of G.D.P.,” which is below 2007 levels.

“So I think we have more fiscal space than we used to because of the interest rate environment,” Ms. Yellen told the Times’s Andrew Ross Sorkin.

By implication, the further that bond yields rise, and inflation expectations along with them, the more the Biden administration would view their potential spending to be constrained. Congress is now at work on a $1.9 trillion pandemic aid package, which Democratic leaders hope to pass in March. They envision a large-scale infrastructure plan after that.

Jerome Powell, the Federal Reserve chair, will face questions from Congress on Tuesday about the central bank’s policies. In other recent appearances, he has emphasized the importance of returning the economy to full health above all other goals, and stressed that inflation has been persistently too low rather than too high over the last decade.

“Fed Chair Powell has taken each and every opportunity to reassure investors that the Fed would consider near-term inflationary pressure to be transitory,” said Katie Nixon, chief investment officer at Northern Trust Wealth Management. “The market is taking the Fed at its word that short rates will be anchored at zero for a considerable time.”

The gap between the prices of regular and inflation-protected bonds as of Friday’s close imply that the Consumer Price Index is expected to rise 2.29 percent a year over the next five years, and 1.99 percent a year for the five years after that. The Fed aims for 2 percent annual inflation as measured by a different index that tends to be somewhat lower, meaning these so-called “inflation break-evens” are broadly consistent with the central bank’s goals.

Put it all together, and the surge in rates so far is basically an optimistic sign that the post-pandemic economy will mark the end of a long period of sluggish growth. But the speed of the adjustment is a reminder that the line between too hot and just right is a narrow one.