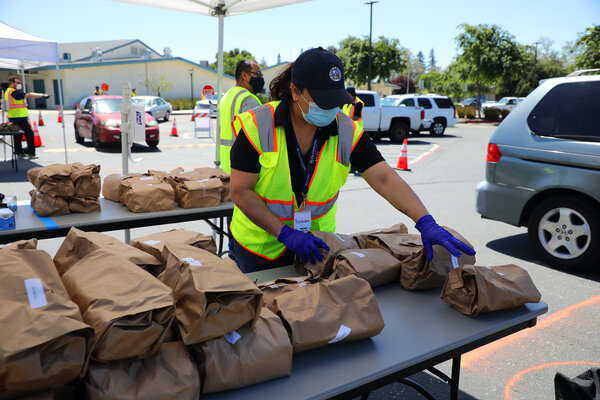 Cafeterias from New York to Los Angeles transformed into food banks, serving students and communities that had come to rely on them. You may remember images of folding tables piled high with brown bag lunches, or snaking lines of cars as families waited to pick up meals.

The pandemic laid bare much of what we once took for granted, including the extent to which schools aid in children’s nutrition. More than half of American schoolchildren — roughly 30 million of them — depended on free or reduced-price school lunches before the pandemic.

This summer, flush with cash from an unexpected budget surplus, California further cemented schools’ role in preventing hunger: The state became the first in the nation to provide all students free breakfast and lunch.

The move, which has a $650 million annual price tag, will reduce absenteeism and nurse visits while improving learning, advocates say.

“The pandemic really shined a light on an issue that had been happening for a long time,” said Anne Moertel with the Center for Ecoliteracy, a nonprofit organization in Berkeley that supported the decision. “We hope that with California taking this on — with the largest population of public school students — some other states will follow suit.”

Public schools in Boston, Chicago, Detroit and New York City have offered universal free meals for years, but California became the first to adopt a statewide plan. Maine has already followed in our footsteps.

To qualify for a free lunch under federal guidelines, a family of four must make less than $34,000 a year. A reduced-price lunch requires an annual income of less than $48,000.

In California, 59 percent of schoolchildren qualify for a discounted meal under these standards, but the true need is quite likely much higher. The income caps are based on federal poverty levels so they don’t take into account the high cost of living in the state.

Erin Primer, director of food services for the San Luis Coastal Unified School District, recalled a single mother who made $50,000 a year calling her, pleading to join the program.

“I was like, ‘I’m so sorry, but you don’t qualify,’ and I remember her crying,” Primer told me.

California’s expanded free lunch program doesn’t technically begin until next school year, but it’s basically in effect already because of the pandemic. When schools closed last year, the federal government provided funding to offer free meals to all students in an effort to make it easier to reach needy children.

Primer told me that the number of children picking up school lunch has more than doubled at some schools in her district. She said it’s most likely because of both newly eligible students and those who had always qualified but not taken advantage.

Before the policy change, children may have felt awkward or shameful picking up a school lunch because of what it said about their family’s income. For high schoolers, it may have not been the cool thing to do when wealthier classmates wanted to eat off-campus.

Families also felt stigma. Some had been reluctant to fill out the needed paperwork because they didn’t want to rely on government benefits. Others worried they would have to reveal their immigration status, though that wasn’t the case.

By offering free meals for all, no questions asked, these roadblocks are eliminated.

Stephanie Bruce, director of nutrition services at Palm Springs Unified School District, told me that when her school began offering free lunch, the school nurse noticed a change: Fewer students came in for headaches and nausea, which had apparently been caused by skipping meals.

There’s plenty of research that shows that eating breakfast and lunch is linked with a reduction in nurse visits, improved attendance and better test scores. Not to mention that children who don’t eat tend to distract the rest of the class, affecting others’ learning experiences, too.

And parents, even those who can afford meals, now don’t have to worry about finding time to pack lunch for their children in the morning.

“It’s just a win for everyone,” Bruce said.

Schools across the country are facing shortages of cafeteria staples amid supply chain woes.

High school students talk about what it’s like to return to the classrooms.

How America’s food system could change under President Biden.

In Portugal, there is virtually no one left to vaccinate.

The secret? Keeping politics out of it.

Vaccination uptick: A mandate requiring all health care workers in California to be vaccinated against Covid-19 by this week appears to have compelled tens of thousands to get their shots.

Drought: California’s reservoirs are so dry that regulators warned on Thursday that it’s possible the state’s water agencies won’t get anything from them next year, The Associated Press reports.

School board issues: A group representing school board members from California and other states asked President Biden for federal assistance to investigate and stop threats made over mask mandates and other policies, The Associated Press reports.

Super Bowl Halftime: The N.F.L. on Thursday announced a Super Bowl lineup with a distinct nod to West Coast hip-hop given the game’s location at SoFi Stadium in Inglewood.

Capitol riot: Klete Keller, a five-time medalist in Olympic swimming who attended the University of Southern California, pleaded guilty to a felony charge for participating in the Capitol riot on Jan. 6.

Paramount cleaning house: The speed with which the new Paramount Pictures chairman is making changes reflects the new boss’s personal style and the vulnerable position in which the company finds itself.

Reparations: Newsom has authorized the return of property known as Bruce’s Beach to the descendants of a Black couple who were run out of Manhattan Beach almost a century ago, The Associated Press reports.

San Diego shooting: The man who opened fire in a synagogue north of San Diego in 2019 was sentenced on Thursday to life in prison without the possibility of parole.

Film museum: The Academy Museum of Motion Pictures opened in Los Angeles on Thursday with an emphasis on diversity and pluralism, not past and present sins.

National forest: Eldorado National Forest has been reopened for day use after a six-week closure because of wildfires, The Sacramento Bee reports.

Redistricting: Three civil rights organizations informed Fresno County supervisors that their apparent intent to keep “existing supervisorial districts largely the same” during redistricting this year would be in violation of federal laws, according to The Fresno Bee.

The wine business: After financial setbacks, this acclaimed winemaker is getting a second chance at the craft in deep Mendocino County.

Giant Sequoias harmed: Recent wildfires in the Sierras may have killed many Giant Sequoias, The San Francisco Chronicle reports.

New light-rail lines: San Francisco is testing trains on its new Central Subway system, a light-rail extension that will connect Chinatown and Union Square to the city’s southeast quadrant. The project is nearly complete, KTVU reports.

San Jose apology: The city of San Jose apologized this week to Chinese immigrants and their descendants, acknowledging its role in nearly a century of violence and discrimination.

Chickpea pancakes, rich with olive oil, are topped with radicchio and mushrooms.

Its bucolic setting, nestled along the riparian waterway, offers cyclists, joggers, walkers, horse riders and nature lovers the perfect getaway from a bustling metropolitan area, just beyond all the trees and hills that line the parkway. Even traffic noise is muted in many areas along the trail. Plenty of access points to get to the trail, too. And, you might want to get in the water for some rafting, kayaking, paddleboarding and fishing in the American River.

After a major fire in Napa Valley last fall, all seemed lost for the region’s grapes. Tinged with ash and smoke, they had been rendered useless for winemaking.

But a distillery in Alameda had an idea, The Guardian reports.

This month, Hangar 1 released a new vodka with a sweet and spicy finish — made from fire-damaged grapes.

Thanks for reading. I’ll be back on Monday. Enjoy your weekend. — Soumya

P.S. Here’s today’s Mini Crossword, and a clue: A kid can make money losing it (5 letters).

Steven Moity and Briana Scalia contributed to California Today. You can reach the team at [email protected].