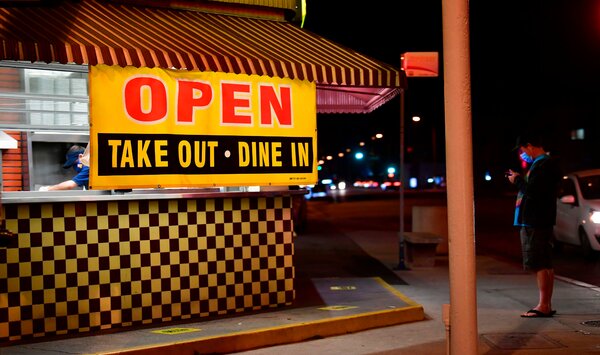 California officials on Thursday announced a curfew aimed at quickly curbing a surge of coronavirus infections, prohibiting nearly all residents of the state, the nation’s most populous, from leaving their homes to do nonessential work or to gather from 10 p.m. to 5 a.m., in the most severe lockdown since the state put in place its first stay-at-home order in March.

“We are sounding the alarm,” Gov. Gavin Newsom said in a statement. “It is crucial that we act to decrease transmission and slow hospitalizations before the death count surges. We’ve done it before and we must do it again.”

The new stay-at-home order is described as more limited than the spring order; in addition to applying only overnight, it has a built-in expiration date for now, and applies only to so-called purple tier counties, which are under the state’s most stringent restrictions in its reopening plan.

It will go into effect Saturday night and will remain in place until the morning of Dec. 21.

As in the spring order, residents can still go outside for walks or to go to work in what are deemed essential jobs, like in grocery stores, and it doesn’t apply to people experiencing homelessness. Restaurants, which are deemed essential, can continue to do takeout and delivery.

But it effectively forces all restaurants to close in-person operations at 10 p.m., even if they are operating outdoors.

As with the spring order, it is likely to be enforced differently across the state, depending on the severity of violations and the attitudes of local leaders. Officials didn’t make clear what enforcement might look like.

The move comes amid what California officials and experts have described as an alarming — but not yet irreversible — wave of new infections, heading into a dangerous Thanksgiving week.

According to The Times’s database, the state was reporting a weekly average of 9,974 new cases per day, more than double the average two weeks ago.

On Monday, Mr. Newsom said that the state was “pulling the emergency brake” on its reopening plan, which sorts counties across the geographically and demographically varied expanse that is California into levels of restriction based on their case numbers and positivity rates.

Counties where more than 94 percent of the state’s population lives — including Los Angeles, Orange, Santa Clara and San Diego Counties — fall into the state’s most restrictive purple tier, meaning most businesses had to shut down or cut back on indoor operations. Indoor restaurants were closed.

Arenas and other sites where the state set up extra health care space earlier in the pandemic were once again being prepared to quickly receive patients, if hospitals become overwhelmed.

And the governor on Monday had hinted that more restrictions, including the curfew, could be on the way.

Officials in Los Angeles County — which has for months struggled more than many other parts of the state — also announced more stringent restrictions than required by the state, including a curfew for restaurants and nonessential stores. Starting on Friday, they must close from 10 p.m. to 6 a.m.

The county ordered restaurants operating outdoors to halve their capacity, and officials said they may be forced to resort to restrictions more like the aggressive lockdown that kept Californians at home in March if conditions do not quickly improve.

[Read more about what counts as an essential business from March.]

Earlier in the week, Dr. Bob Wachter, a professor and chair of the University of California, San Francisco’s department of medicine, said that the state’s actions were warranted to curb the spread of the virus, particularly in light of the imminent holiday.

“Whether or not it’s enough, I guess we’ll see,” he said.

A Times analysis shows that states that imposed more restrictions have less bad outbreaks, and California was the first state to put in place a stay-at-home order in March.

Less is known specifically about the effectiveness of curfews, but New York officials recently took a similar step.

According to Curbed, many public health officials described measures like the one that California announced on Thursday as weaker stay-at-home orders, not curfews, and see them as less helpful than more targeted guidance.

[Read about California’s rules for gathering.]

Mr. Newsom announced the curfew in a news release, foregoing his usual lengthy virtual news conference, in the wake of stinging criticism and outrage over his decision to attend a high-dollar dinner celebrating a lobbyist friend’s birthday at the French Laundry, a Napa Valley destination, along with members of several other households.

Critics said that Mr. Newsom undermined the spirit of the restrictions he has so intensely promoted — even to the point of scolding residents for gathering in too-large groups or embracing their loved ones.

On Monday, he apologized, calling it a “bad mistake.”

Mr. Newsom said his own children returned to private school in Sacramento, but public schools in the area remain closed. The impact of school closures across the state, which has widened the inequality gap, amounts to what one state Democrat called “state-sanctioned segregation.” [Politico]

State Senator Bill Dodd confirmed Thursday he was among more than a dozen elected officials who attended a conference in Maui amid a nationwide surge in Covid-19 cases. [The Mercury News]

Bay Area advocates say that immediate action is needed to save transportation jobs and services cut by the pandemic. The Golden Gate Bridge transit district board recently voted to lay off workers instead of using capital reserves to pay them. [San Francisco Chronicle]

The police in Vallejo, in Solano County, have killed 19 people since 2010. After years of impunity, the city is finally trying to break the police union’s power. The fight could go on for years. [The New Yorker]

Well water throughout the state is contaminated with “forever chemicals,” toxins that will never break down. They are dangerous and expensive to get rid of, and many Californians don’t even know they’re drinking them. [CalMatters]

If you hear a few loud booms coming from the Central Coast’s Vandenberg Air Force Base on Saturday morning, that’s just a Falcon 9 rocket traveling faster than the speed of sound. [The Tribune]

A suspect in a Ponzi scheme used an underwater scooter in Shasta Lake, the largest man-made reservoir in California, to evade the authorities during a chase. When he surfaced, agents were waiting with dry clothes his wife had provided. [The New York Times]

Together 37 years but rarely paired onscreen, Kurt Russell and Goldie Hawn are in a new Netflix holiday movie that is an indication of how they — and Hollywood — have changed. [The New York Times]