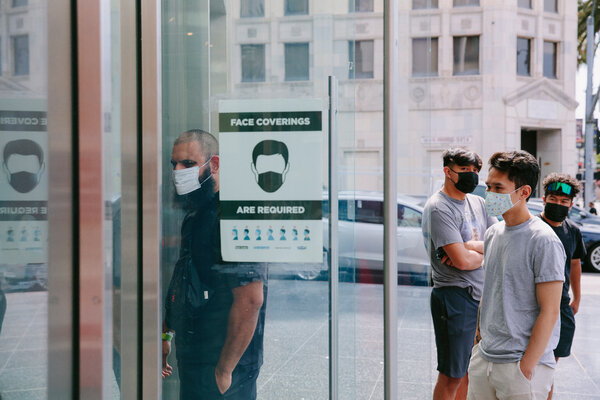 If you’re like me, that was your gut reaction to the news this week that public health officials in Los Angeles County were urging residents to wear masks indoors, regardless of vaccination status, amid a troubling rise in Covid-19 cases involving the highly infectious Delta variant.

Californians have been urged to mask up before. And in the past, the advisory has been a precursor to mandates as hospitals filled after dangerous surges of Covid-19. Every time restrictions have been eased before, the virus has reasserted itself.

This time, officials have been emphatic that we’re not on a path to new restrictions and that the guidance is not a directive.

“We don’t want to return to lockdown or more disruptive mandates here,” Barbara Ferrer, the public health director for Los Angeles County, told my colleague Shawn Hubler. “We want to stay on the path we’re on right now, which is keeping community transmission really low.”

So what risk does the Delta variant pose to Californians? Here’s what you need to know:

Should I be worried about the Delta variant if I’m fully vaccinated?

Yes. But not because you’re likely to get sick.

The Delta variant is extremely contagious, scientists say, and may cause more severe illness. Dr. Anthony S. Fauci, the nation’s top infectious disease doctor, has described it as “the greatest threat in the U.S. to our attempt to eliminate Covid-19.” Estimates from the C.D.C. suggest that the variant is now responsible for about one in every four cases in the United States. In Los Angeles County, scientists found that it accounted for nearly half of all of the variants genetically sequenced.

However, vaccines work well against the Delta variant.

This means that it’s dangerous largely because it’s likely to spread among people who are unvaccinated.

Do experts think advising residents to wear masks indoors is a good idea — even when the C.D.C. and the state’s department of public health haven’t done so?

Dr. John Swartzberg, an infectious disease specialist and clinical professor emeritus at the University of California, Berkeley School of Public Health, this week told me that he saw Los Angeles County’s move to advise indoor masking as a prudent one, given the trajectory of the Delta variant in other countries.

“If this policy prevents some infections and it doesn’t cause any harm, why not do that?” he said.

As for the inconsistency it creates with guidelines issued by federal and state public health agencies? Dr. Swartzberg says that’s OK.

“In California, we’d been spending all these months being scared to death, and then hearing, ‘It’s OK, you don’t have to worry about it, and people who aren’t vaccinated — they’ll wear a mask,’” he said. “Everybody knew that wasn’t going to be the case.”

Why is Los Angeles County the only place in California where officials have advised vaccinated people to wear masks inside?

Dr. Swartzberg said he didn’t think the Delta variant was a particular threat in Los Angeles, where huge swaths of the population have already been infected with the virus, and vaccination rates are relatively high.

And although officials in Los Angeles County have implemented some of the nation’s strictest and most enduring pandemic rules, public health officials in the Bay Area have led the way on restrictions. They ordered residents to stay home even before the state did, for instance, and many Bay Area officials kept capacity limits or other rules in place, even as the state would have allowed them to ease those measures based on cases rates and other precautions.

“The biggest surprise was that it was L.A. County and not the Bay Area,” Dr. Swartzberg said.

As The San Francisco Chronicle recently reported, officials there view themselves as having moved into “the long game” phase of vaccination efforts — meaning they’re targeting pockets of residents who aren’t vaccinated with one-on-one consultation — in part to head off the Delta variant.

Dr. Swartzberg added that he was generally more worried about surges in states where relatively few people have been vaccinated; California, he said, was very much headed in the right direction.

“I think in the long run, we’re going to win this,” he said. “This pandemic will end.”

Still, Dr. Ferrer said that there were millions of Californians — including children and Black and Latino essential workers — who had not yet been vaccinated. While efforts to inoculate those residents continue, the mask guidance is a worthwhile precaution, she said.

Read the full story about how the Delta variant’s spread is prompting reconsideration of precautions across the world.

In Butte County, officials said the Delta variant had been identified in at least one case, The Chico Enterprise-Record reported.

Here’s what scientists know about the Delta variant.

President Biden met on Wednesday with governors across the West, including Gov. Gavin Newsom, and promised federal aid as record-shattering heat waves and a dangerous wildfire season roil the region.

The Sacramento Bee looks at how fires get their names.

Rincon Island, an artificial island built during the 1950s just off the coast of Ventura County, once pumped oil from 50 wells. But after the company that owned it went bankrupt, taxpayers are on the hook for the cleanup costs, The Desert Sun reports.

The Orange County Register explored how Republicans are trying to woo Asian and Latino voters.

John Cox, a Republican candidate for California governor, said he would force homeless people into mental health or addiction treatment before providing them with housing, The Associated Press reports.

The mayor of Sacramento announced a new plan aimed at sheltering its growing homeless population: a municipal “right to housing.”

The San Francisco Chronicle made an interactive map that allows users to track car break-ins in close to real time.

A week after Britney Spears spoke in court and described suffering horrific abuse under the court-sanctioned conservatorship that has controlled much of her life, her father is calling for an investigation of her claims.

The Times’s Taylor Lorenz explains the outlandish appeal of the Nelk Boys, and how they make an income.

Real estate: California’s red-hot market has cooled just a bit, but brokers expect a renewed frenzy in the coming months.

Late last week, The Palo Alto Daily Post reported that a long-running legal dispute between the Bay Area suburb of Hillsborough and a homeowner, over her very Flintstone-themed home, had been settled. The house will stay.