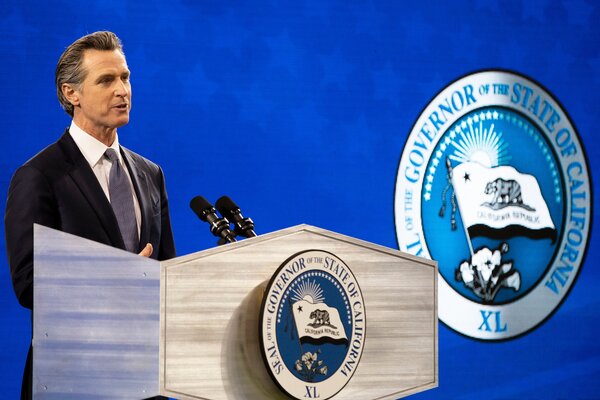 As Gov. Gavin Newsom delivered his State of the State address on Tuesday, it was hard not to see in it an attempt to defend his tenure against recall efforts that are gaining steam.

“We won’t change course just because of a few naysayers and doomsday-ers,” Mr. Newsom said in an empty Dodgers Stadium on Tuesday. “So to the California critics, who are promoting partisan power grabs and outdated prejudices, and rejecting everything that makes California great, we say this: We will not be distracted from getting shots in arms and our economy booming again.”

With less than a week until the deadline for supporters of the recall to collect the 1.5 million signatures required to validate the effort, Mr. Newsom may benefit from progress on the fronts where he is facing the most criticism: pandemic restrictions on businesses and school reopenings.

[Read more about the State of the State address.]

On Tuesday evening, the Los Angeles Unified School District and teachers’ unions reached an agreement to reopen schools for most students in the coming weeks. The district has been the only one of the nation’s 10 largest school districts not to bring back a significant number of students.

And while the recall effort began with those critical of the stop-and-go lockdowns of last year, several more counties have reached the less restrictive red tier this week, meaning that indoor dining and gyms, museums and other businesses could soon reopen in several parts of the state.

“I really believe he’s done a very good job under very trying circumstances,” former Gov. Gray Davis said last week about Mr. Newsom. “I can’t remember a governor since World War II who’s had so many things to deal with at the same time.”

Here’s an updated look at where the recall effort stands and what comes next.

How many signatures does this recall have?

According to the state’s most recent report, as of Feb. 5, supporters of the effort to recall Mr. Newsom had submitted roughly 1.1 million signatures, including 798,310 signatures that had been verified by county officials. But of those, only 668,202 signatures were valid, meaning they belonged to a registered California voter.

Supporters of the recall claimed to have gathered 1,927,000 signatures as of March 3, but all signatures must be verified by the state.

How many signatures are needed to trigger a recall?

For the recall to move ahead, proponents must submit 1,495,709 valid signatures to county election officials by March 17, the court-determined deadline, which was extended because of the pandemic. The number of signatures required is 12 percent of the votes cast in the most recent election for governor, the 2018 race when Mr. Newsom defeated the Republican businessman John Cox.

How will we know how much the recall effort costs?

The state’s Department of Finance will work with the Secretary of State’s office and county election officials to estimate the cost of a recall election. Once that happens, the estimate goes to top state officials and then the Joint Legislative Budget Committee has 30 days to review and comment on the costs before the signatures are officially certified.

When would a recall election occur?

If enough signatures are certified to trigger a recall, the state’s lieutenant governor is required to set an election between 60 and 80 days from the date of certification. That could be extended to 180 days if it would allow the recall election to be consolidated with a regularly scheduled election.

[Read more about the recall election process in California.]

Kevin Faulconer, the Republican former mayor of San Diego, is one of the highest profile contenders to replace Mr. Newsom. Two other Republicans — the conservative activist Mike Cernovich and John Cox, who lost to Mr. Newsom in 2018 — have also announced plans to challenge the governor.

President Biden directed states to make all adults eligible for coronavirus vaccines by May 1 in an effort to speed up the inoculation campaign and reopenings. [The New York Times]

Here’s what to know about California’s reopening.

An independent report commissioned by the Los Angeles City Council found that the L.A.P.D. mishandled the George Floyd protests last summer. The report faulted the department for lack of planning, illegally detaining protesters and its chaotic and overly aggressive response. [The New York Times]

California regulators are ordering car insurers to refund money to car owners in the state, accusing them of overcharging customers during the pandemic. [The Wall Street Journal]

Catch up on Democrats’ fight to get Mr. Becerra, along with Mr. Biden’s other cabinet picks, confirmed.

Michael Tubbs, the former mayor of Stockton and an advocate for a universal basic income, is joining the Newsom administration as a special adviser. [The Associated Press]

Read a conversation with Mr. Tubbs from last year.

A wild car chase near Diamond Bar with a 9-year-old girl in the back seat began as a road rage incident — and ended in a tense standoff. [CBS]

As companies and investors increasingly say they are focused on climate and sustainability, Bitcoin’s huge carbon footprint could become a red flag. [The New York Times]

California sends more visitors to Hawaii than any other state. But two-thirds of Hawaii’s residents say they don’t want tourists to return, according to a recent survey. The state is using the pandemic-related travel collapse as a way to rethink tourism and the way it welcomes visitors. [The New York Times]

Willa and Charles Bruce were among the first Black people to settle what would become the city of Manhattan Beach, but the city shut down their resort in 1924. Now, the Bruce family wants their land back. [The New York Times]

Watch a short video about Bruce’s Beach from last year.

This year, awards season is a moment to take a close look at the institutions giving out the awards for their tendency to give far fewer of them to women and people who aren’t white.

That’s true for the Recording Academy, which puts on the Grammys, set to take place on Sunday night. The show will address a music industry that has been especially pummeled by the pandemic. It’ll feature a mix of live and taped performances.

And the Weeknd, hot on the heels of a critically lauded Super Bowl performance, said he’ll boycott the awards “from now on.” He joins a growing group of Black artists, including Drake, Frank Ocean and Kanye West, who have publicly rebuked the Academy.