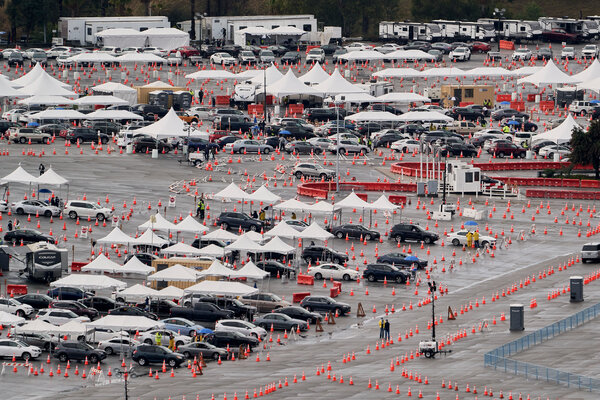 The good news? Coronavirus cases, deaths and hospitalizations have been on a steady and steep decline in California, suggesting that some combination of inoculations and emergency restrictions implemented over the holidays have helped the state through the worst of its most terrifying surge.

But as Californians adjust to reopened life and grapple with an enormous vaccination campaign that readers have described as confusing and inconsistent — in spite of efforts to make it otherwise — there are a lot of unanswered questions about how we’re going to move forward.

This week may provide some clarity about where we’re headed. Here’s what to watch:

Changes to the vaccine rollout

Last week, Gov. Gavin Newsom announced a partnership with the federal government aimed at speeding up the effort to vaccinate millions of Californians.

Standing before the Oakland-Alameda Coliseum on Wednesday, the governor said that the Biden administration would send additional supplies and staff to help set up the stadium as a mass vaccination site that would open on Feb. 16 and would be able to distribute about 6,000 doses per day. A second mass vaccination site is set to open under the same partnership at Cal State Los Angeles.

But while those will certainly be helpful, two other state partnerships have the potential to more thoroughly transform California’s vaccine rollout.

Those would be the broad agreements with Blue Shield of California and Kaiser Permanente, two of the state’s largest health care insurers.

[Read more about the challenges in the state’s vaccine rollout.]

Essentially, the companies have agreed to help streamline the distribution of vaccines across the state, with a particular focus on reaching vulnerable communities, and they have agreed to do so without taking a profit, Mr. Newsom said on Wednesday. Beyond that, though, state officials have provided little detail about how those partnerships will work.

So how much could it help to hand over the reins of vaccine distribution to Blue Shield and Kaiser Permanente?

Dr. David Lubarsky, the chief executive of U.C. Davis Health, told me that because both have existing relationships with most of the state’s health systems, he thinks that “this is a turn in the right direction.”

[Track how the vaccine rollout is going across the country.]

The key, he said, will be figuring out how to allocate more doses to health care providers who can quickly identify patients who should be prioritized for vaccines based on things like their age, chronic conditions and whether they live in a particularly hard-hit community.

Then, those trusted doctors or clinicians will be in a better position to convince reluctant or concerned patients that they should get vaccinated.

[Read more about how far-right and anti-vaccination activists have been emboldened in California.]

According to The San Francisco Chronicle, the deal requires a return to in-person instruction only after the city is moved into the second most restrictive (or red) reopening tier, and if vaccines are made available to on-site workers. The move was hailed as desperately needed progress.

“This is a major step forward toward a goal that we share with so many parents: safe reopening of school buildings for students and staff,” the unions said in a statement.

[If you missed it, catch up on the debate over reopening California schools.]

But, as The Chronicle reported, the deal also immediately drew criticism from some experts, who said the process should move more quickly, pointing to federal guidance suggesting schools can reopen safely with precautions.

And the agreement comes after months of tension between city leaders and the school board, whom Mayor London Breed and others slammed for focusing more attention on a controversial effort to rename schools than to reopen them.

Last week, the city took the extraordinary step of suing the district in hopes of forcing the issue.

Throughout the state, similarly fraught debates over how to safely reopen schools without putting educators at risk are playing out.

In Los Angeles, the superintendent of schools and the head of the teachers’ union expressed shared outrage over a city councilman’s plan to sue the district in a similar effort, The Los Angeles Times reported.

Politics are adding an extra layer of complication: San Diego’s former mayor, Kevin Faulconer, has made reopening schools a centerpiece of his pre-emptive campaign for governor.

Was a decision on restricted indoor worship services an ill-advised “foray into armchair epidemiology?” Or was it the correction of an unconstitutional restriction on religion, when secular businesses, such as shopping malls, factories and warehouses, are allowed to be open indoors?

In any case, the Friday ruling by a splintered Supreme Court was one of the biggest legal victories for challengers of California’s stringent Covid-19 rules.

The court partly backed California’s ban on indoor worship, lifting the full prohibition but allowing capacity restrictions. The move, my colleague Adam Liptak reported, followed a similar one in a case from New York, further solidifying a new direction for the court.

[Read the full story about the ruling.]

The governor’s office on Saturday issued some revised guidelines in response to the ruling and promised more detailed guidelines, according to The Associated Press.