The indictment, which marked a major turning point in the long-running investigation by the district attorney, Cyrus R. Vance Jr., centered on the failure to pay taxes on a variety of valuable perks that Mr. Weisselberg and other executives received from the Trump Organization.

Here is what we know:

What are the accusations? 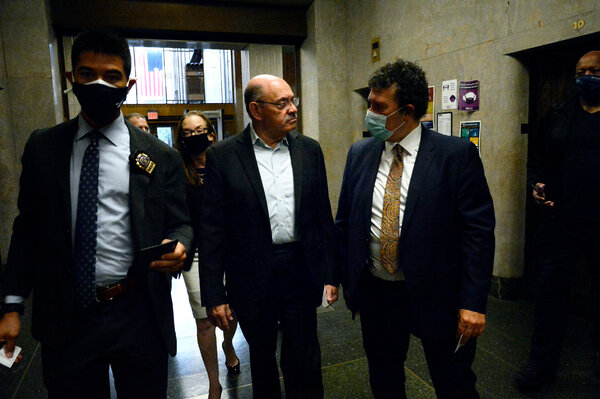 The indictment accused the Trump Organization and Mr. Weisselberg of engaging in a 15-year scheme starting in 2005 to help executives evade taxes by compensating them with perks and bonuses that were kept off the books. The company also dodged some taxes it would have owed, the indictment said.

The indictment called Mr. Weisselberg one of the largest beneficiaries of the scheme, and said that he received about $1.76 million in indirect and hidden compensation, allowing him to evade hundreds of thousands of dollars in taxes at every level of government. It said that he had improperly received a total of $133,000 in federal and state tax refunds as well.

Mr. Weisselberg is also accused of receiving free rent, cars for both him and his wife, and private school tuition for relatives. The company helped Mr. Weisselberg falsely claim he lived outside New York City, easing his tax burden, the indictment said.

And it said that Mr. Weisselberg and other executives were paid bonuses through Trump properties including the Mar-a-Lago Club, and that income was then reported as if they were contractors rather than regular employees. That allowed Mr. Weisselberg to make contributions to a type of tax-deferred pension plan that is available for self-employed people, the indictment said, enabling him to earn hundreds of thousands of dollars that he should not have.

No. Although Mr. Trump is entwined with the Trump Organization, the real estate company that bears his name, the indictment did not accuse him of wrongdoing. And no employee other than Mr. Weisselberg was charged.

But the investigation is continuing, and it now appears to be focused squarely on Mr. Trump as well as other company executives. Prosecutors and a team of outside forensic auditors and experts are continuing to comb through millions of pages of Mr. Trump’s personal and corporate tax returns, as well as the underlying records and documents.

In particular, the prosecutors have been investigating whether Mr. Trump and the Trump Organization manipulated the value of the company’s real estate holdings to obtain loans and tax benefits, among other potential financial crimes.

The special grand jury hearing evidence in the case, which handed up the indictment that was unsealed on Thursday, will continue to meet up to three times a week until late this year. That time period could be extended even longer by an order from a judge.

Were any of Mr. Trump’s children charged?

Also no. Three of Mr. Trump’s adult children, Ivanka Trump, Eric Trump and Donald Trump Jr., followed their father into the family business, and they briefly had their names surface in the investigation.

Late last year, Mr. Vance’s office and the office of Letitia James, the New York State attorney general, issued separate subpoenas to the Trump Organization related to tax write-offs on millions of dollars in consulting fees paid to TTT Consulting L.L.C., a company that was set up for the three adult children.

But the children were not mentioned in the indictment.

How can a company be indicted?

Corporations, like people, can stand trial for crimes. If convicted, Mr. Trump’s company could face steep fines or other penalties.

Even though the Trump Organization is not publicly traded, or regulated in any formal way, it could face fallout from its business partners.

The indictment is not likely to change the status of the Trump’s Organization’s roughly $330 million debt to Deutsche Bank, Mr. Trump’s primary lender. Officials at the bank have determined that it could demand immediate repayment of its loans to the company only if the Trump Organization were charged — and convicted — of bank-related fraud, according to a person familiar with the internal deliberations. The indictment released Thursday did not include those allegations.

Still, it could put a crimp in the Trump Organization’s plans to reopen its deal-making pipeline for hotels and other projects after four years of largely operating in neutral while Mr. Trump was in the White House.

What has Mr. Trump said about the investigation?

Mr. Trump has long assailed the investigation as a partisan fishing expedition. On Thursday, in a brief interview with The New York Times, he called the accusations a “continuation of the witch hunt that started when I came down the escalator,” referring to the 2015 announcement of his presidential campaign at Trump Tower.

Asked if he was worried about the pressure being put on Mr. Weisselberg, Mr. Trump said only that his longtime lieutenant was an “honorable man.”

In a statement on Thursday, the Trump Organization said Mr. Weisselberg was being used as a “pawn in a scorched-earth attempt to harm the former president.”

“The district attorney is bringing a criminal prosecution involving employee benefits that neither the I.R.S. or any other district attorney would ever think of bringing,” the statement read. “This is not justice; this is politics.” Lawyers for the organization said tax cases should be handled by civil tax authorities, not prosecutors.

Mr. Trump could see some short-term political bounce from the charges. As he resumes his political rallies, the charges — and his denunciation of the investigation — could pump up the crowds and mobilize his supporters.

But the boost could be short-lived. Even if he manages to parlay the charges into some immediate good will with his base, Mr. Trump could face the prospect of his company standing trial. That could be a costly distraction if he tries to mount another presidential campaign.

What is Mr. Vance’s role?

Mr. Vance is the top prosecutor in Manhattan; he has the power to enforce New York State law. A three-term Democrat who did not seek re-election, he has faced questions over the years about his willingness to hold the wealthy and powerful accountable. An indictment of a company founded by a former president is likely to be an enduring part of his legacy.

Unlike other investigations that have scrutinized Mr. Trump in recent years, including those run by federal prosecutors in Manhattan and the special counsel Robert S. Mueller III, Mr. Vance’s case ensnared a senior Trump executive and the company itself.

A key turning point for Mr. Vance came when he defeated Mr. Trump at the United States Supreme Court — twice — to obtain the former president’s tax records. After the second victory in February, the investigation heated up: Prosecutors secured the tax returns, issued a flurry of subpoenas and convened the special grand jury that is hearing evidence in the case.

In a sign of the case’s importance, Mr. Vance occasionally attended the grand jury proceedings and watched some witness testimony.

Mr. Vance enlisted a prominent former federal prosecutor with a specialty in white-collar and organized crime cases, Mark Pomerantz, to take over day-to-day leadership of the investigation alongside Carey Dunne, Mr. Vance’s general counsel, who had argued the taxes case before the Supreme Court.

In recent weeks, Mr. Vance’s prosecutors also joined with Ms. James, who had been conducting a civil investigation into some of the same conduct.

So, what comes next?

The indictment of Mr. Weisselberg was not a foregone conclusion. For months, the district attorney’s office sought his cooperation with the broader investigation into Mr. Trump, but that effort sputtered as Mr. Weisselberg, a loyal aide to the Trump family business for nearly a half-century, stood by his boss.

That effort, however, will enter a new phase now that Mr. Weisselberg has been indicted, and it represents a direct threat to Mr. Trump. Partly in response, the former president hired the defense lawyer Ronald P. Fischetti, a former law partner of Mr. Pomerantz.

Prosecutors routinely seek leverage over potential witnesses — often through threats of criminal prosecution — to turn them into cooperating witnesses. If convicted, Mr. Weisselberg could face time in state prison.

That means he now has some incentive to cooperate, assuming that he does have valuable information about Mr. Trump or the Trump Organization, something the company has long denied.

What prosecutors hope to glean from Mr. Weisselberg is a view into Mr. Trump’s mind. Bringing a case against the former president for the possible crimes they are examining — including defrauding banks and insurers, or committing tax fraud or other misdeeds — requires proving intent.

Because Mr. Trump famously avoids email, they need to turn to the people who were in the room with him when crucial decisions were made. And Mr. Weisselberg was almost always in the room.

Mr. Vance has said he would make a decision on whether to charge the former president before he leaves office on Dec. 31.