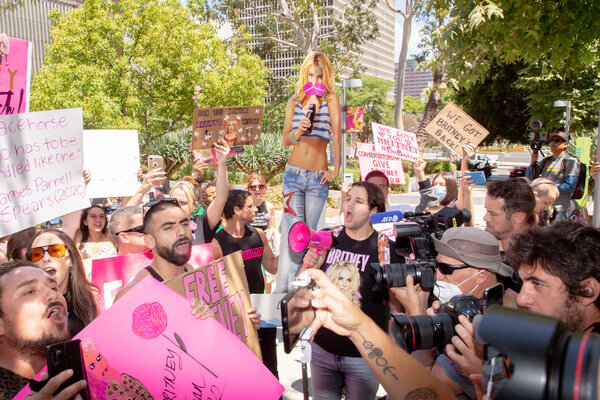 For months since The New York Times’s documentary “Framing Britney Spears” exploded open the megastar’s court-sanctioned conservatorship — the arrangement under which her father and others have controlled her life — countless debates have swirled around her story.

It’s raised questions about a legal system that would allow a once-estranged family member to take over the career of one of the world’s most famous artists. It’s prompted soul-searching among millennial women like me about the pop culture narratives of our childhoods.

But one question has loomed largest: What does Britney Spears actually think about all this?

Last week, the singer answered that question for a judge — and everyone else — in a wrenching 23-minute statement in which she said she had been drugged against her will and prevented from marrying or removing her IUD.

“I just want my life back and it’s been 13 years and it’s enough,” she told a judge in Los Angeles. “It’s been a long time since I’ve owned my money, and it’s my wish and my dream for all of this to end.”

My colleagues Samantha Stark and Joe Coscarelli have been covering the saga. I spoke with them about what’s next. Here’s our conversation, edited and condensed:

So first, can you explain briefly what happened last week in court?

Samantha: So, at the last hearing Britney had, she had her court-appointed attorney, Samuel Ingham, say that she wanted to address the court. There was so much anticipation of what she would say, and she let it all out.

We had gotten these sealed documents, so we knew how she felt about being put in a mental health facility and feeling that she was being retaliated against. Last week, she tried to communicate that. She said to the judge: You didn’t listen to me. Last time I spoke, I felt like I wasn’t heard at all. I felt dead.

You’ve pored over many court records, including for your report that detailed how Britney had been pushing to end the conservatorship as early as 2014. Still, her account was pretty horrific. Was there anything that was especially surprising to you?

Samantha: She really bucked this narrative that her dad had put forth, that she wasn’t forced into the mental health facility. What surprised me was that no one moved to investigate the allegations.

Joe: Just to pull back, procedurally, it’s an interesting quirk of the conservatorship system that as the conservatee, you don’t have to come to court or interface with the judge often.

When they meet, which tends to be every couple months, Britney doesn’t have to come to those things, and in fact she usually hasn’t.

What was very special about this was to get her voice on the record. Because of Covid, the California court system is still doing a lot of stuff remotely, so anyone could listen. That wouldn’t have been the case normally.

As the hearing started, a lawyer for one of Britney’s current conservators moved to seal the speech and Britney interrupted her and said, I want people to hear it. So it was an open question until just before whether her remarks would be public.

Can you describe how it felt for you, after making “Framing Britney Spears” without her participation, to listen to Britney speak on her conservatorship at length?

Samantha: It’s been a year of doing this and hoping we’re reporting things correctly and doing the right thing by even making a documentary about her. There’s always that nagging question of whether she wants us to.

Hearing her actually say everything out loud and her saying, no I want people to hear this — for me, emotionally, that was the greatest thing that had ever happened. I think our reporting bolstered her story. But this had been building up in her since before our reporting.

Joe: We spent so many years following bread crumbs about how she was reacting under this conservatorship. You see one tiny slice in the public. More in court documents. To have her just lay it all out — it was jarring and stunning.

As somebody who covers the world of celebrity, the more sensitive the story, the less I expect to hear from the principal figures themselves. Famous people essentially don’t talk to the media anymore, since they have social media. I never expected to hear her speak on it.

What’s next? Could the judge theoretically come back and say, “OK, we hear you: Conservatorship over?” Then what?

Joe: I think for at least the last year you’ve seen Britney, through her court-appointed lawyer, take baby steps to, if not end the conservatorship entirely, then end her father’s involvement.

As far as a judge ending it outright: I don’t think that’s how it would go. I think we’re going to see a flurry of additional filings, but this conservatorship is so unprecedented that it’s also unprecedented to undo it.

Samantha: Britney brought up the point that she was never able to hire her own lawyer; it’s unclear what would have to happen procedurally to get a lawyer that she chooses. And that’s something that could happen. She could petition to end the conservatorship. She made the points that she’s providing for and working for herself, and all these people that she’s paying.

She’s said she wants the conservatorship to end without a mental health evaluation, since her father has been able to choose her doctors and she may be worried about that.

Joe: Right. The fact that the conservatorship is in such control of everything from her mental health to her security means she’s asking for someone else to swoop in — in this case a judge. She’s stuck in this loop and now she’s trying to get out.

Is California’s conservatorship system unique? And has Britney’s saga prompted calls for change?

Joe: I know every state has some version of it. Sometimes they’re called guardianships.

There’s always been questions about oversight and whether this is the best way to go about these things. The cases you hear about most, like Casey Kasem or Sumner Redstone, are people with a lot of money, and who are incapacitated near the end of their lives.

Britney is young, active and working. We had a bit of this from outside the courtroom: People calling for more oversight of the system because they may have loved ones who they felt were manipulated before their deaths joining with #FreeBritney activists who see it as its own human rights abuse. We’ve heard some bipartisan chatter for reform now that this is at the forefront of the culture.

Samantha: It’s tough because rules vary by state and even sometimes by county. We were trying to figure out how many people are under conservatorships in the United States and some estimates said as many as a million people, but they’re not tracked consistently.

What are your most pressing unanswered questions going forward?

Joe: A big question is about who was driving this ship. There seemed to be a lot of players who weren’t as proactive as they should have been on Britney’s behalf, from the judges to her court-appointed lawyer. Britney mentioned her management team, and, without naming names, her whole family. She only singled out her dad.

A lot of the spotlight is going to be turned on the people around her: Who was incentivized to keep this thing going against her wishes? As we now know, she’s been raising her hand and saying some version of that since as far back as 2014. There will be systematic and Britney-specific questions about circles of people who were in charge.

Samantha: And I guess we’re just waiting to see what happens next, because they didn’t lay out an action plan in court. So will they file to end the conservatorship, and if so, how long will that take? How fast can this go? And will Britney keep speaking out?

Read the full story, reported from confidential court records, about how the pop star has quietly pushed for years to end the conservatorship.

Read about how Spears’s plea spurred questions about her lawyer.

Read more from The Los Angeles Times about how the #FreeBritney movement has inspired lawmakers to try to change conservatorship laws.

In America’s fruit and nut basket in the Central Valley, the country’s most lucrative agricultural belt, water is now the most precious crop of all. In some cases, it makes more sense to sell it than actually grow crops.

Los Angeles County strongly recommended that everyone wear masks indoors as a precaution against the Delta variant of the coronavirus.

Because of a paperwork error, Gov. Gavin Newsom won’t be listed as a Democrat in the upcoming recall election. So he’s suing Secretary of State Shirley Weber for not smoothing over the filing mistake he made more than a year ago, Courthouse News Service reports.

The Lava fire in Siskiyou County, which has burned across 13,330 acres and is 20 percent contained, is the largest of five wildfires burning in California, The Los Angeles Times reports.

A heat dome in the Pacific Northwest is driving temperatures to extreme levels and creating dangerous conditions in a region unaccustomed to oppressive heat.

Here’s a look at the antitrust arguments against Facebook, and why a judge rejected them.

A bear and her three cubs took a dip next to beachgoers in South Lake Tahoe, CBS 13 reports.