Residents of the White House have had fur and feathers, claws and hooves, scales, stripes and prehensile tails. Some were found on the property, many came with the new tenants and others were delivered by foreign leaders. But for most of modern U.S. history, the president has had a pet.

President-elect Joseph R. Biden Jr. is expected to resume that tradition in January with his two German shepherds, Champ and Major, after President Trump’s term ends as the first in decades without any pets living full-time at the residence.

More often than not, presidential pets have been dogs and cats. But many less traditional pets have also lived at 1600 Pennsylvania Avenue, their quantity and variety depending on each administration, said Matthew Costello, a senior historian for the White House Historical Association.

“If you’re talking about which White House was quite literally a zoo, it was probably Theodore Roosevelt’s White House,” Mr. Costello said. “Between the six children that he brought with him to the White House and the assortment of pets — the Roosevelts, they just loved animals.”

Pets at the White House have reflected the occupants’ personalities, he said, and the animals sometimes played a prominent role in an administration’s image. “It helps humanize the president a little bit more,” Mr. Costello said. “It’s something that’s relatable to most people. Most people have a pet or have had a pet at some point in their life.”

Although the list of White House pets is lengthy, according to the Presidential Pet Museum, an organization founded to preserve information and artifacts related to presidential pets, the history is also littered with unverified tales and missing details. Still, records clearly show many strange pets.

A one-legged rooster and Bill the hyena. 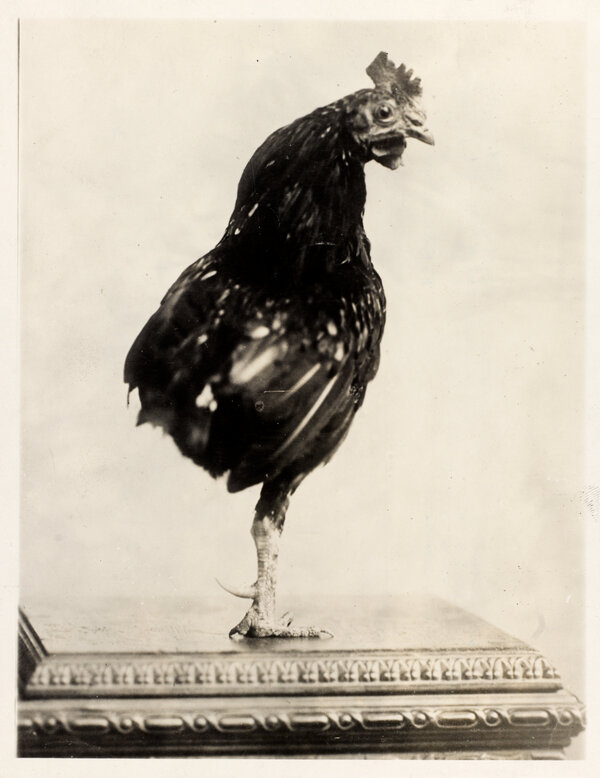 Theodore Roosevelt, who traveled abroad, hiked at home and led conservation efforts as president from 1901 to 1909, kept a lengthy list of animals at the White House. In his family’s care were horses, dogs, a Hyacinth macaw parrot, kangaroo rats, five guinea pigs and a one-legged rooster, according to the Presidential Pet Museum. There was also a short-tempered badger named Josiah and a green garter snake named Emily Spinach.

Republican supporters in West Virginia also gave Mr. Roosevelt a bear, which his children named Jonathan Edwards after an ancestor of the first lady, Edith Roosevelt. The president also received exotic animals as gifts from foreign leaders. In 1904, King Menelik of Abyssinia gave Mr. Roosevelt a lion cub named Joe and a hyena named Bill that “laughs nearly all the time,” The New York Times reported that year.

(President Dwight Eisenhower also received an unusual gift in 1959, when Prime Minister Fulbert Youlou of the Republic of Congo gave him a baby elephant named Dzimbo. The president, later trying to feed the elephant, compared it to his grandchildren: “He doesn’t like carrots.” Dzimbo eventually moved to the Washington Zoo.)

A flock of sheep for the White House.

In an effort to keep costs low and to conserve on human resources during World War I, a flock of sheep were brought to the White House to keep the grass neat, according to the Woodrow Wilson Presidential Library and Museum. The flock arrived at the White House in 1918 from Maryland and grazed on the property for at least two years. At some point, the flock was sheared and two pounds of wool was given to each state, where it was auctioned off and ended up raising about $52,000 for the Red Cross.

President Calvin Coolidge and Grace Coolidge, the first lady while he was in office, from 1923 to 1929, kept a menagerie at the White House, including several dogs, cats, birds, a goose and a donkey. But it was the raccoon, Rebecca, that was among the family’s most famous and beloved pets.

In November 1926, the family received the raccoon from Mississippi to be served for Thanksgiving dinner. But finding the raccoon to be friendly, the family changed her fate, the museum said. Over the years, Mr. Coolidge grew close to Rebecca and sometimes walked her around the White House grounds on a leash. Mr. Coolidge even gave Rebecca an embroidered collar with the title “White House Raccoon,” according to the White House Historical Association.

Although Rebecca had taken a place in the spotlight, even attracting attention at the annual Easter Egg Roll in 1927, she sometimes caused problems. In 1927, she fled the Coolidge residence in South Dakota, running away from “her attendants in the dead of night” and climbing a tall tree, “which she declines to descend in spite of all entreaties,” The Times reported. She was eventually donated to the Rock Creek Zoo.

President Herbert Hoover had several dogs during his tenure at the White House, from 1929 to 1933, but few appeared to attract as much attention as Billy, a wild opossum the family adopted after it strayed onto the property, according to the Herbert Hoover Presidential Library and Museum.

The family kept the opossum in a pen built for the Coolidge family’s raccoon, Rebecca. In 1929, Billy became the subject of news coverage after Mr. Hoover lent him out to a nearby high school that was upset after their live mascot, also an opossum, had disappeared, according to the Library of Congress. Similarly, before Mr. Hoover moved into the White House, President Benjamin Harrison had two opossums during his tenure, from 1889 to 1893, which he named Mr. Reciprocity and Mr. Protection after the Republican platform at the time.

During the Kennedy administration, when the scions of wealthy families lived in the White House, some of the most common pets were horses and ponies. “Jacqueline Kennedy had grown up riding horses,” Mr. Costello said. “She had been interested in equestrianism her entire life.”

One of the more well-known horses belonging to the family was Sardar, a gift from the president of Pakistan in 1962, according to the John F. Kennedy Presidential Library and Museum. The president’s daughter, Caroline Kennedy, had a pony, Macaroni, who was photographed often, and she and her brother had parakeets named Bluebell and Maybelle. Macaroni and Tex, a pony given to Caroline by Vice President Lyndon B. Johnson in 1961, would stay at a nearby Kennedy property but was often on the White House grounds, Mr. Costello said. A third pony, Leprechaun, was given to the family by Irish leaders.