About 48 million American children are not eligible for a coronavirus shot. Their parents face difficult choices as school starts.

President Biden has declared the current coronavirus surge a “pandemic of the unvaccinated.”

But as the United States confronts its worst moment of the pandemic since the winter, there is a group of 48 million people who do not have the option of getting a vaccine: children under 12.

Because a vaccine is not yet authorized for young children, and may not be for some time, their families are left in a particularly difficult position heading into this school year.

“Waiting for a vaccine for the under-12 set has started to feel like waiting for Godot,” said Dana Gilbert, 49, of Minneapolis. Her 11-year-old son was born prematurely and has special needs, and a family doctor advised that he not return to school in person until a vaccine is available.

She had hoped that might happen by now. Instead, she is scrambling to find a tutor.

Her plan is to wait out the clock: Keep him at home until a vaccine is authorized for emergency use, or until he turns 12 next year, whichever comes first.

Polls show that a considerable number of parents do not intend to get their children vaccinated even when shots become available. The Kaiser Family Foundation found that 25 percent to 30 percent of parents with younger children would “definitely not” get them vaccinated. A Gallup poll found that 46 percent do not plan to do so.

But millions of other families are in anxious limbo, waiting for a vaccine, as the Delta variant leads to a swell of new cases, including in children.

The timeline for a vaccine for children under 12 — initially expected by this fall — appears to have slowed, as officials consider safety, effectiveness and dosage. Dr. Anthony S. Fauci, the nation’s top infectious-disease expert, recently indicated that a vaccine could become available to young children “hopefully by the mid, late fall and early winter.” Shots for children ages 5 to 11 are expected first; children as young as six months may have to wait longer.

In interviews, many parents of children under 12 described feeling increasingly desperate, angry and backed into a corner as they reluctantly send their children into the classroom this fall — or resort to drastic actions to keep them safe.

Others are less worried, but equally frustrated as they head into another school year marked by pandemic rules. In some cases, mandates are being applied most stringently to young children not eligible for a vaccine. 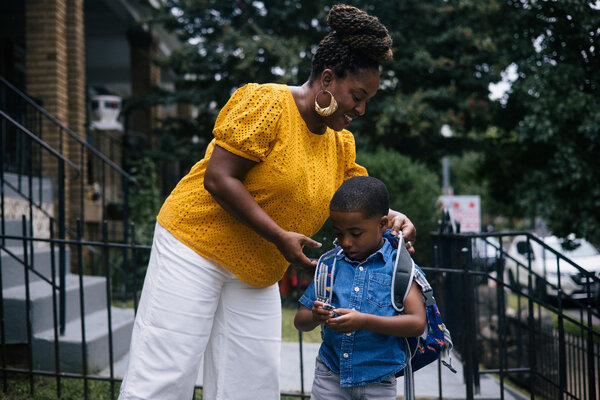 “It doesn’t feel like there are any good options at this point,” said Adina Ellis, 45, who tossed and turned in bed for hours the night before school started this week in Washington, D.C., racked with indecision about whether to send her 6-year-old son, Cassius.

Ms. Ellis lost her father to Covid-19 last year and had been among a group of parents calling for the mayor to allow remote learning. But like some other large cities, Washington is requiring nearly all students to be in person this year.

On the first day of school, Ms. Ellis rose before dawn, sat on her front porch with her husband and made a “game-time decision,” she said, to drop her son off at school. Watching him walk up the steps, carrying a Hot Wheels backpack, some part of her became resigned to the possibility that he may get infected.

“That thought will haunt me for as long as he’s going to school unvaccinated,” she said.

The data on coronavirus cases in children is imperfect, but by most accounts, serious illness has been rare.

But the Delta variant has added a new wrinkle that is not yet fully understood.

More children are now getting seriously sick, as hospitals fill up with coronavirus patients, by and large unvaccinated. Delta is roughly twice as infectious as the original virus, leading to more overall infections, and researchers are seeking to understand whether it is also more severe. One recent study found that Delta is more likely to cause hospitalizations. Some children have also developed debilitating long-term cases of Covid, even after initially mild or asymptomatic infections.

That uncertainty has left parents to make their own risk calculations, often coming to vastly different conclusions.

Mike Mulder, 41, is more worried about his children’s risk from a vaccine than from Covid-19 itself. “A lot of people like to paint people like us as anti-vax, but we’re not,” said Mr. Mulder, who lives in San Luis Obispo County, Calif., and is part of a parent group that pushed for in-person learning and mask freedom during the pandemic.

He said he had vaccinated his six children for other diseases but was not yet ready to do so for the coronavirus because of the lack of long-term studies. “We are just concerned, like so many other people, that it’s so new,” he said.

Todd Newlin, 40, of Ramsey, Minn., near Minneapolis, said that he and his wife were vaccinated and planned to vaccinate their children, ages 4, 9 and 11, when a shot became available. He is open to the vaccines, in part, because he wants his family to be able to travel, go unmasked and live life as normally as possible.

But with cases rising, his district enacted a mask requirement for kindergarten through sixth grade. Older students — who have the option to be vaccinated — do not have the same requirement.

He said he would reluctantly follow the local mandate, though he views the health risks for children who get the coronavirus as relatively low.

“I’m not going to teach my kids to live in fear,” he said.

At least 450 children have died from Covid-19, according to the Centers for Disease Control and Prevention, out of more than 640,000 people who have died in the United States.

Alexandra Simbaña looks at the same risks and is gripped with fear.

“When people say, ‘Oh, a small percentage of children will get fatally sick,’ that is not comforting when you have been to the dark side of the moon,” said Ms. Simbaña, 42, of Washington, D.C., who was hospitalized for Covid-19 last year and is still suffering from health problems. She kept her 9-year-old daughter home this week rather than send her into a classroom. “No,” she said, “that 1 percent could be my child.”

And then there is a simple practicality that often cuts through it all: child care.

“If I had an option and I could keep them at home and keep the lights on and feed them, it would be a no-brainer,” said Isis Spann, 32, of Moncks Corner, S.C., an education coach who works with families to teach elementary-age children at home. “But it just doesn’t work out for our family dynamic that way.” She is cautiously sending her four children to school in person this fall.