For 30 years, James (Whitey) Bulger was a notorious South Boston mobster and an F.B.I. informer. And then for 16 years, he lived on the run, trying to evade capture while on the bureau’s Most Wanted list.

Over that nearly half-century of murder, extortion and snitching, Mr. Bulger intersected with a memorable cast of characters.

There was John Connolly, the childhood friend turned F.B.I. agent who tipped him off to his impending arrest. There was Stephen Flemmi, his sidekick with a chilling nickname: the Rifleman. And his longtime companion, Catherine Greig, who stayed by his side on the lam even though he had been implicated in the murder of two of her family members.

Even in his demise this week at a West Virginia prison — he was pummeled to death with a padlock hidden in a sock — Mr. Bulger crossed paths with those befitting a life of brutality and betrayal. A man who the prison authorities believe carried out the attack, a fellow inmate and mobster named Fotios Geas, known as Freddy, was said to have beaten Mr. Bulger “unrecognizable.”

Some of the key players who intermingled with Mr. Bulger, and who contributed to the country’s fascination with a bygone era of underworld gangsters, are still around. 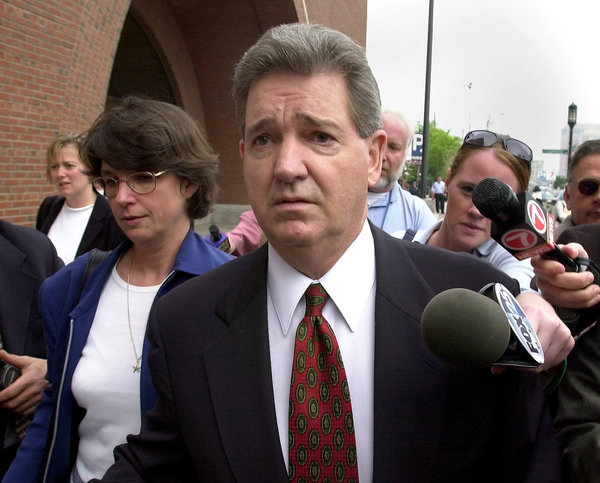 Mr. Connolly and Mr. Bulger grew up together in the sprawling Old Harbor Housing Project in South Boston, a gritty neighborhood long before gentrification took hold. They were childhood friends.

In adulthood, they took separate paths — or at least it appeared that way at first. By the 1960s, Mr. Bulger had already spent time in federal prison, including at Alcatraz, for bank robbery. Mr. Connolly would join the F.B.I.

In the 1970s, now out of prison, Mr. Bulger moved back to Boston and reunited with Mr. Connolly, who had joined the bureau’s office there. Mr. Connolly, whose job was to recruit mobsters to help take down crime bosses, brought in Mr. Bulger as an informer. They made a deal: If Mr. Bulger ratted out members of the underworld, the Justice Department would look the other way in his racketeering and extortion schemes.

Mr. Bulger may have gotten the better deal. He wooed Mr. Connolly with jewelry and money, and got protection in return. Two days before Christmas in 1994, he received the ultimate protection. Mr. Connolly warned him that he was about to be indicted on federal racketeering charges, prompting Mr. Bulger to flee.

While he was on the lam, Mr. Connolly was convicted in 2002 of helping Mr. Bulger and received a 10-year prison sentence. He was later convicted of murder for providing information to mobsters to carry out a killing.

By the time Catherine Greig met Mr. Bulger in the early 1970s, he was already thought to have been involved in the killings of two of her brothers-in-law. Nonetheless, she was smitten. And she was doted upon — showing up to work wearing flashy jewelry and a fur coat.

But two decades later, when Mr. Bulger got the tip about his impending arrest, he darted off not with Ms. Greig but with his other longtime girlfriend, Teresa Stanley. They traveled to New York, Florida and Louisiana as Mr. Bulger insisted they were simply taking a lengthy vacation. Ms. Stanley grew tired and decided after a few months she wanted to return home. (She died in 2012.)

Mr. Bulger then arranged to be reunited with Ms. Greig, the start of their 16-year run from the authorities. They crisscrossed the United States, ultimately settling in 1998 into Unit 303 in an apartment building just blocks from the beach in Santa Monica, Calif.

They had new names: Charles and Carol Gasko.

Mr. Bulger kept a low profile, while Ms. Greig ventured out to get her hair done. By 2011, the F.B.I. determined that its best bet to catch Mr. Bulger would be through Ms. Greig, on the assumption she was more recognizable and had distinctive habits. The strategy worked, and the couple were arrested on June 22 that year.

She was sentenced in June 2012 to eight years in prison for helping Mr. Bulger avoid the authorities. Ms. Greig is serving time in the low-security Federal Correctional Institution in Waseca, Minn. She is eligible for release in September 2020.

When Mr. Connolly signed up Mr. Bulger as an informer, he recruited another man at the same time: Stephen Flemmi. Friends called him the Rifleman, a nickname he earned in the Korean War for his marksmanship.

He was, in essence, the Italian-American twin of Mr. Bulger, an Irish-American. They smoked together, drank together and killed together.

They were also ruthless. When Mr. Flemmi’s girlfriend, Debra Davis, once overheard that they were F.B.I. informers, the mobsters decided that she had to die. Mr. Bulger strangled her, and Mr. Flemmi stripped her naked and removed her teeth with pliers to make it difficult for her body to be identified.

While Mr. Bulger was on the run in 1995, Mr. Flemmi was arrested and charged with racketeering and extortion. In 2003, he pleaded guilty to 10 murders in a deal that spared him the death penalty. He testified against Mr. Bulger in his 2013 trial.

In 1960, William Bulger was elected as a Democrat to the Massachusetts House of Representatives. (Mr. Connolly, before he joined the F.B.I., helped his campaign.) Mr. Bulger later became president of the State Senate and then president of the University of Massachusetts, cementing his legacy as a cultural and political figure in the state.

But his status and stature crumbled in the early 2000s. Facing suspicions that he knew his brother’s whereabouts and details of his crimes when they happened, Mr. Bulger remained silent and refused to cooperate with the authorities. He always denied firsthand knowledge of Whitey’s crimes and whereabouts.

His silence cost him his job at the University of Massachusetts, but he left with an annual state pension of $200,000. He is now 84.

John Martorano had many names: the Executioner, the Cook and the Basin Street Butcher. Mr. Martorano, a member of Mr. Bulger’s Winter Hill Gang, confessed to 20 killings but recoiled at being called a hit man or a mass murderer or a serial killer.

He preferred “vigilante,” Mr. Martorano said in 2013 during Mr. Bulger’s trial. When asked if there was “honor or integrity” in what he did, he replied, “I thought so.”

Loyalty supposedly ran deep in the Winter Hill Gang, but Mr. Martorano flipped on Mr. Bulger, whom he had considered a brother and a partner in crime, and testified against him. Mr. Bulger, he said, committed the ultimate sin by working as an F.B.I. informer.

Mr. Martorano, now 77, received a 14-year sentence for his confessed murders in a deal to cooperate with the government. He was released from prison in 2007 and received $20,000 from the government to start a new life.

The Boston Globe reported in 2008 that he had rejected an offer to join the federal witness protection program and was living in the Boston area.