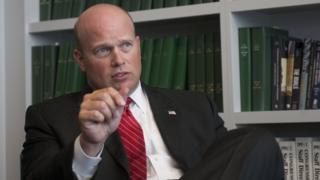 Just minutes after news broke that US Attorney General Jeff Sessions had been forced out of his job, President Donald Trump announced a replacement: Matthew G Whitaker, Session’s chief-of-staff. So who is he?

Before the dust had even begun to settle on the results of the November mid-term elections, long-embattled Attorney General Jeff Sessions released a letter confirming he is out of a job.

“At your request,” Mr Sessions wrote to President Trump, “I am submitting my resignation.”

Mr Sessions’ replacement was announced by the president minutes later, via Twitter: “We are pleased to announce that Matthew G Whitaker, Chief of Staff to Attorney General Jeff Sessions at the Department of Justice, will become our new Acting Attorney General of the United States. He will serve our Country well….”

The 48-year-old former football star has long been seen as destined for a bigger role in the Trump administration, viewed favourably by the president as his “eye and ears” in the Justice Department. But who is Matthew Whitaker and how might he approach his possible new role overseeing the Russia probe?

Mr Whitaker is originally from Ankeny, a suburb of Des Moines in central Iowa, the son of an elementary school teacher and a scoreboard salesman.

He became a football star in high school and was eventually inducted into the Iowa High School Football Hall of Fame. He went on to play tight end in the Holiday Bowl and the Rose Bowl for the Iowa Hawkeyes in the 1990s.

Whitaker graduated from the University of Iowa College of Law, and then went into practice as a lawyer, for a time as corporate counsel for a chain of grocery stores.

President George W Bush appointed him US Attorney for the Southern District of Iowa, where he prosecuted white collar and drug trafficking crimes. He held that office from 2004 until 2009.

His wife Marci is a civil engineer, and the couple has three children.

Mr Whitaker first took a shot at public office in 2002 when he ran unsuccessfully for state treasurer of Iowa as a Republican. He ran for United States Senate in 2014, losing the party’s nomination to Republican Senator Joni Ernst.

In his campaigns, Mr Whitaker positioned himself as a fiscally conservative opponent of the Affordable Care Act, and said his political role models were Republican Senators Rand Paul and Ted Cruz. He courted the anti-abortion, evangelical Christian vote, saying at one candidate’s forum that he would scrutinise nominees for federal judge to ensure they had a “biblical view of justice”.

He further built up his conservative credentials when he served as campaign co-chair for Texas Governor Rick Perry in 2012 and became the executive director of the conservative watchdog group, Foundation for Accountability and Civic Trust in Washington DC.

He was hired as Sessions chief-of-staff in October 2017.

From commentator to acting AG

Prior to joining Mr Sessions’ staff, Mr Whitaker was a conservative legal commentator for CNN, and penned several opinion pieces that may shed light on how he might approach his new role in the Justice Department, in particular when it comes to his possible oversight of the Russian election-meddling investigation lead by special counsel Robert Mueller.

In July 2017, Mr Whitaker appeared on CNN and mused on possible ways that President Trump could crush the probe, which included the departure of Mr Sessions.

“I could see a scenario where Jeff Sessions is replaced with a recess appointment, and that attorney general doesn’t fire Bob Mueller, but he just reduces his budget to so low that his investigation grinds to almost a halt,” Mr Whitaker said.

In August 2017, Mr Whitaker wrote a piece called “Mueller’s investigation of Trump is going too far”. In it, Mr Whitaker argued that Mr Mueller had overstepped the boundaries of his inquiry when he began looking into the Trump family’s finances. He called this a “red line” that Mr Mueller should not cross, warning that it would render the investigation a “witch hunt” – a term that the president himself has become quite fond of.

“The Trump Organization’s business dealings are plainly not within the scope of the investigation, nor should they be,” Mr Whitaker wrote.

Prior to the 2016 elections, Mr Whitaker also penned a piece saying that as a former prosecutor, he would have indicted Hillary Clinton over her use of a private email server while she was secretary of state.

Speculation that Mr Whitaker would one day take a more central role at the Justice Department has been bubbling for months. A report in the Washington Post said that he spoke directly to Donald Trump as early as October about replacing his own boss, as the president continued to publicly grouse about Jeff Sessions’ handling of the Russia probe.

After a New York Times article reported that Deputy Attorney General Rod Rosenstein had considered wearing a wire to monitor Trump in the early days of his presidency, Mr Whitaker was discussed as Mr Rosenstein’s possible replacement. Mr Rosenstein offered to resign but ultimately kept his job.

According to the Times, Mr Whitaker has used what could have been a tricky assignment as a bridge between his boss, the embattled Attorney General Sessions, and a hostile White House to ingratiate himself with the president.

“According to two White House officials,” the Times reports, “Mr Trump took a liking to Mr Whitaker, who has the sort of commanding bearing that the president likes.”

Prince Philip ‘cancelled’ Queen Victoria tradition says Jobson When you subscribe we will use the information you provide to send you these newsletters. Sometimes they’ll…