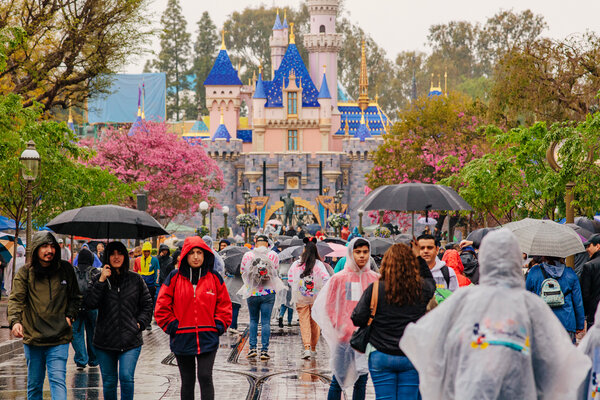 The past week has been heavy. So today, we’re proverbially going to Disneyland. Almost.

My colleague Brooks Barnes, who covers Hollywood, sent us this dispatch from the Magic Kingdom, about the opportunity — ahead of Disneyland’s planned reopening next month — to get just a “touch” of Disney:

Disneyland will open its gates for the first time in more than a year on April 30. So how many churros should Mickey and Minnie be stockpiling to meet pent-up demand?

Tickets have yet to go on sale, and capacity, at least while the coronavirus remains a threat, will be limited by California regulators. But let’s put it this way: There may not be enough cinnamon sugar in all of the Disney-verse.

On Thursday, a monthlong event began at Disney California Adventure, a theme park located in the shadow of Disneyland in Anaheim. A Touch of Disney, as the offering is called, could be viewed as a test run or soft reopening: For $75 a person (no reduced price for children), fans can walk around the 72-acre property — where no rides are running but costumed characters wave from a distance — and buy food and merchandise.

Who would pay that much for the chance to pay for things?

[Read more about Disney’s plan to reopen Disneyland, which has been closed for a year.]

A Touch of Disney tickets include parking and a $25 food voucher. But still.

The answer: When tickets for the event went on sale on March 4, the demand made Disney’s website crash. Disney quickly made more tickets available, but they were all purchased within a few hours.

“I was so desperate that I started checking the site in the middle of the night on both my phone and my laptop, and finally it worked,” Jessica Mattei, 36, said as she stood in Minnie ears at California Adventure on Thursday.

Ms. Mattei, a San Diego receptionist, attended solo. “Some people may not understand, but this is my happy place,” she said, laughing sheepishly and adjusting her face mask. “The rest of the world and all of your problems just kind of melt away.”

“The food is an attraction by itself,” Ms. Mattei continued. “My goal is to get something from every stand.” After several hours in the park, her favorites included pepperoni pizza egg rolls ($7); brisket macaroni and cheese ($7.49); and a Pacific Mimosa ($15), a concoction that included champagne, Blue Curaçao and pineapple juice.

Thousands of similar-minded people filled California Adventure on Thursday. (A Disney spokeswoman declined to discuss capacity, except to say that it was limited and adhered to state coronavirus safety rules.) At about 3:45 p.m., more than 20 people were in line for Monte Cristo sandwiches, a Disney specialty ($11 for a half portion). Over in Radiator Springs, an area themed around Pixar’s “Cars” franchise, 38 people waited to pick up $7 churros and $9 chili con queso, having placed orders using an app on their phones.

“Spoonful of Sugar” from “Mary Poppins” played from overhead speakers, followed by the theme from the Enchanted Tiki Room, a classic Disney attraction involving robot birds.

[Read the latest on the state’s reopening.]

Traversing a Disney theme park normally requires a lot of patience. But without the marathon lines for rides — or the stroller gridlock or the screams from roller coasters looping in the distance — California Adventure felt more like an actual park, the kind where you leave relaxed instead of exhausted. People were stopping to absorb the dogwood trees, ablaze with pink blooms, and feeling the mist from the faux-rock waterfall on their faces. There was no rush-rush-rush to fit it all in.

“It’s been great, although I thought there would be more characters,” said Barry Young, who drove from Carlsbad with his wife, Natasha, and their five children, ages 6 to 14. “We did see Donald Duck and Minnie from a distance. But it’s hard when you have kids who want to hug them. It’s been a long pandemic — for the whole family.”

It sounded a little like somebody else could use a hug from Mickey.

Here’s what else you may have missed over the weekend

Here’s a quick update on the effort to oust Gov. Gavin Newsom from office:

The most recent report from the California secretary of state’s office, which was posted on Friday, said that as of March 11, about 1.2 million signatures had been validated in support of the recall. In order to trigger a recall election, the state had to have received roughly 1.5 million signatures from registered voters by March 17.

The leaders of the effort said last week that they had submitted more than two million signatures ahead of the deadline, which, at the current rate, suggests they’ll have enough. But county election officials have until April 29 to verify signatures.

Still, Mr. Newsom acknowledged last week that he expected proponents to reach the signature threshold and has formally begun campaigning to keep his job.

Here’s everything you need to know about the recall effort. [The New York Times]

Mr. Newsom has characterized those seeking to kick him out of office as right-wing extremists. The effort’s leader, he said, has suggested that immigrants should be microchipped. Is that true? Yes. [The Sacramento Bee]

Not all supporters of the recall are far-right conspiracy theorists, as Mr. Newsom has said. But many are part of a resurgence of right-wing extremism in Orange County. Skateboarders have rolled down the streets of Ladera Ranch shouting racist slurs and affluent suburbanites from the county joined the storming of the Capitol. [The Los Angeles Times]

As more details emerged about the victims of the spa shootings in Georgia, and about the horrific events, the outpouring of grief by Asian-Americans across the country continued. See more updates here. [The New York Times]

Volunteers have offered protection and support in Oakland’s Chinatown. [The Los Angeles Times]

“Nothing is safe here in California.” One man of Asian descent who was brutally attacked from behind in San Francisco says he wants to leave. [The San Francisco Chronicle]

Reports in cities across the country found that the police mishandled Black Lives Matter protests, including in Los Angeles, where officers were issued highly technical foam-projectile launchers for crowd control, but many of them had only two hours of training. [The New York Times]

The Los Angeles Police Department said on Thursday that it had opened an investigation into a woman’s allegation that she had been sexually assaulted by the actor Armie Hammer. [The New York Times]

Spending a few hundred dollars to eat at a Disney park with your family sound outlandish? You can always take a cue from the super rich, who are bored and spending tens or hundreds of thousands on “investments” like watches, Air Jordans, Pokémon cards and NFTs. [The New York Times]

March Madness is happening. Yes, there are some California teams playing. (If you care, you probably already know which ones.) You can find all of The Times’s coverage here. [The New York Times]