On a Saturday afternoon in July, Octavia Jones recalled the day in June when the temperature hit 103 in the South Bronx, and her entire neighborhood seemed to take refuge in the spray from an open fire hydrant, staying until an evening thunderstorm swept the heat away.

It was that kind of summer, Ms. Jones said, when the weather changed so suddenly that she developed a novel hack for managing the heat. “Every time we drive past a fire hydrant,” she said, “I try to open the windows so the kids get wet.”

On this July afternoon, Ms. Jones, a Pentecostal minister, was driving along a computer-generated route — windows closed — as part of a “citizen scientist” project to map the way heat pooled in certain sections of New York. Nine cars drove simultaneously along different routes in Upper Manhattan and the South Bronx, each bearing a sensor that measured air temperature and humidity once per second.

Data from the project, which will not be available until the fall, will add detail to what climate and health researchers have known for years: that heat in New York is distributed unequally, and that its distribution follows other patterns of inequality, including race, income, air quality and access to air-conditioning.

With her teenage daughter calling out directions, Ms. Jones drove along a barren stretch of oil tanks in the Mott Haven neighborhood, the sun pounding down on her car. Mott Haven, according to the city Department of Health and Mental Hygiene, has one of the lowest levels of tree cover and air-conditioning in New York, making residents especially vulnerable to heat.

“Hopefully this will help the community,” Ms. Jones said. “I told my family we’re working for science in the Bronx.” 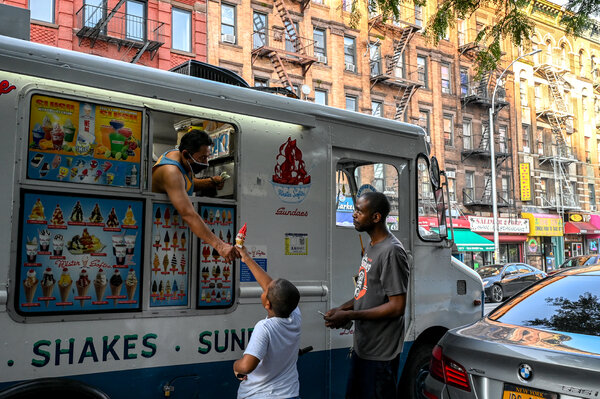 New York, long considered to have a humid continental climate, has in recent years become part of the humid subtropical climate zone. Even when high temperatures were mild this summer, lows have been well above normal, and the warming ocean temperature has pumped humidity into the air, making summer nights sticky and uncomfortable.

The city has escaped the deadly weather that afflicted much of the globe this summer. Instead we’ve had sudden storms, mild days and haze from wildfires a continent away. But the season has highlighted the structural differences in the way New Yorkers experience the same weather.

Timon McPhearson, director of the Urban Systems Lab at the New School, has spent the last decade studying the disproportionate impact this heat has on Black and brown neighborhoods, where a paucity of tree cover and green space creates “urban heat islands” whose air temperature can be two to four degrees warmer than neighboring areas, with the difference in surface temperatures many times that.

Dr. McPhearson, like others, attributed the heat disparities to “decades of racist disinvestment,” beginning in the 1930s, during the Great Depression, when the federal government’s Home Owners Loan Corporation drew red lines around predominantly African-American neighborhoods as too risky for home loans. These neighborhoods, including much of Harlem, the South Bronx and Manhattan’s Lower East Side, now have fewer trees and shabbier parks, which translates to higher temperatures and air-pollution levels and all the health problems that come from them.

Urban heat islands tend to proliferate in neighborhoods that also have high rates of obesity, asthma and cardiovascular disease, and limited access to air conditioning, all combining to exacerbate the risks of high heat.

African Americans in the city are twice as likely to die from heat exposure as white New Yorkers, according to the city’s health department. Over all, heat contributes to about 350 deaths in the city each summer — far more than cold, which contributes to an average of 15 deaths.

If you want to map inequality in New York, you can just count trees. Or measure the temperature.

On a midday in early August, that disparity became glaring when The New York Times used an infrared thermometer to record surface temperatures on Manhattan’s Upper West Side, as well as in East Harlem and the South Bronx.

On the tree-canopied block of West 94th Street near Central Park in Manhattan, the sidewalk temperature was 84.

Plants and trees cool a neighborhood by providing shade, of course, but also by a process called transpiration: as water evaporates from the leaves, its transformation into vapor consumes heat from the atmosphere.

Just across town, at a treeless lot for sanitation trucks on First Avenue in East Harlem, the blacktop registered at 115 degrees, a full 31 degrees hotter.

Sonal Jessel, a public health specialist and the director of policy at WeAct, an environmental justice organization in Upper Manhattan, often refers to the lot when conducting heat tours of East Harlem, pointing out the shortage of trees and green space compared with the neighboring Upper East Side.

It was important to see heat as a multiplier of other health risk factors, Ms. Jessel said, not just as a problem in itself. “Air pollution, an older population, a low-income population, a population of color,” she said. “All of those things that create other forms of hardship are exacerbated by the heat.”

Continuing up to East 138th Street in the Mott Haven section of the South Bronx, the blacktop temperature rose to 119 under a punishing sun. There was barely a tree on the block.

Mott Haven, a largely Black and Latino neighborhood with more than twice the city’s poverty rate, has only 7 percent tree canopy cover, according to the health department; in wealthier Riverdale, by comparison, trees cover 47 percent of the neighborhood.

Under the administrations of Michael R. Bloomberg and Bill de Blasio, the city has created programs to paint building roofs white and has planted one million trees, focusing on areas with little tree cover. But the trees tend to be young and not fully grown, and have not replaced the tree cover lost from older, bigger trees dying of parasites or age, said Dr. McPhearson of The New School.

“The new trees are extremely important,” he said, “but we need another million trees campaign.”

At Intermediate School 223 in Borough Park, Brooklyn, on an August morning, Sarah Slack supervised a group of summer school students armed with infrared thermometers to measure the heat variability around their school. As at many city schools, IS 233’s playground is a treeless blacktop slab, where students on hot days have measured surface temperatures as high as 135 degrees, Ms. Slack said.

On this cloudy day, the playground was only 90 degrees. But the adjacent light-colored concrete surface where school administrators parked was nine degrees cooler. “Students want to know why they have to play in the hottest part of the school grounds,” Ms. Slack said.

The city last year started a program to provide free air-conditioners to low-income people age 60 and over, who are particularly vulnerable to the heat. In Sheepshead Bay, at the bottom of Brooklyn, Priscilla Singer, 93, got hers through the nonprofit organization JASA, which serves older adults. The new unit made her life bearable, she said, even with her health problems. “My old one was 47 years old, on its last legs,” said Ms. Singer, who is homebound. “It means so much to me.”

But at a public-housing project in the Soundview section of the Bronx, the relief from the free air-conditioners was short-lived, because the management subsequently replaced the building’s windows, and the units no longer fit. The Rev. Carmen Hernandez paid a neighbor to hook hers up through a wall vent using tape and plastic, but now water comes into the apartment when it rains. Several neighbors, who had tried placing their units in wall vents, also complained of water leaking in. On a recent evening, Ms. Hernandez’s apartment was 80 degrees with the unit on.

Still, she said, her case was better than others’. Some neighbors simply discarded the air-conditioners when the new windows went in. Her neighbor across the hall had a heart attack during a recent heat wave, and has not returned, Ms. Hernandez said.

In the long shadows before sunset, the pavement outside was 104 degrees.