LOGAN, W.Va. — Richard Ojeda presented himself as a new face of the Democratic Party: a tough guy in combat boots whose economic populism was the key to flipping coal country and maybe — just maybe — a model for winning in rural America in the age of Donald J. Trump.

For a moment, Mr. Ojeda seemed poised to pull it off. He channeled West Virginia’s union roots when he championed a statewide teachers’ strike earlier this year. He had a plain-speaking, almost Trump-like style that attracted attention and money, drawing more than $2 million in donations from around the country.

But on Tuesday he lost badly, taking just two out of the 18 counties that make up the Third Congressional District, a swath in the southern coal fields that is home to Mr. Ojeda and many of the teachers he supported. He even lost his home county, Logan, by 24 points.

“I was absolutely slapped in the face when I saw the totals,” said Heather Ritter, a school librarian and supporter of Mr. Ojeda, the day after the election.

She added, “I don’t think people understand what’s just happened and the gravity of this.”

While the Democrats succeeded in winning back the House — and Senator Joe Manchin III of West Virginia managed to hang onto his seat — the magnitude of Mr. Ojeda’s loss served as a stinging reminder to Democrats of the enduring power of Mr. Trump in rural parts of the country, particularly in Appalachia.

Mr. Ojeda’s supporters expected him to become a major force on the national stage, an important corrective to past mistakes when Democrats did not listen to working-class voters. Instead, he was dragged down by the undertow of nationalized politics — with Mr. Trump making many visits to West Virginia and supporting Mr. Ojeda’s opponent, Carol Miller, whose main appeal to voters appeared to be her connection to the president.

Antipathy toward Mr. Trump helped drive record turnout in some parts of the country, but many voters also came out to support the president. This was especially true in West Virginia, where more than 47 percent of the state’s registered voters turned out on Tuesday — significantly more than in recent midterm years, according to the West Virginia secretary of state. In 51 interviews in five different towns in the district where Mr. Ojeda ran, a majority of voters said they turned out to defend the president. 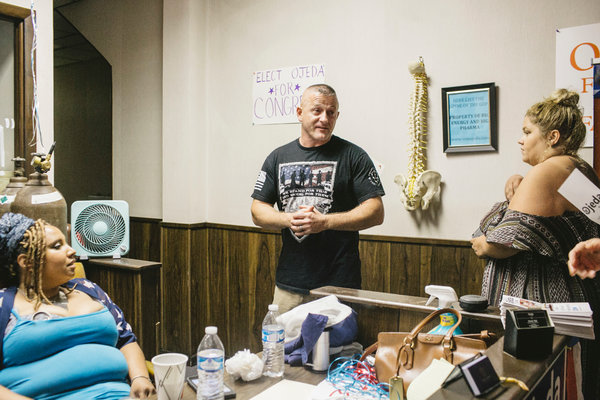 Dennis McCloud, a retired coal miner in the tiny town of Dingess, said he was voting for the first time in a midterm election. He said he had come to show support for Mr. Trump, who he said had been besieged by the news media and Democrats.

“If he says this cone is red, they’ll say it’s blue,” said Mr. McCloud, 65, pointing to a traffic cone on the sidewalk as he stood outside an elementary school in Dingess, where he had just voted for Ms. Miller, a candidate he said he hadn’t heard much about.

“I never felt this strongly about a president before,” said Mr. McCloud, who was about to go celebrate his birthday — and his vote — with a steak.

Social media also seems to have played a role in Mr. Ojeda’s loss. Supporters point to a flurry of activity on Facebook with doctored photographs aimed at discrediting him. In one, Mr. Ojeda is sitting in a chair in front of his campaign sign smiling and holding cash like a fan. In another, a Facebook page called Veterans Against Richard Ojeda featured a picture of him altered to look like he was in makeup, pink fatigues and a pink beret.

Matt Stanley, a school administrator who was staring in disbelief at the election results at Mr. Ojeda’s election night party, said he saw them as a grim sign for the American political system.

“It’s just disgusting that social media rules,” he said. “What he says they don’t believe, but what they see on the computer, they do believe. Explain that to me. I can’t wrap my head around it.”

Of Ms. Miller, he said: “She didn’t show up to anything. She didn’t have to.”

Ms. Miller, a state delegate, was relatively unknown among voters and mostly avoided interviews and open public appearances during the campaign. Even the men sitting in lawn chairs behind a large sign that urged voters in Dingess to choose Ms. Miller were thin on details about their candidate.

“Don’t know that much about her to be honest with you,” said Hayden Hannah, 70, a retired timber worker, “but she stands for Trump and that’s enough for me.”

One of Ms. Miller’s campaign ads says she’s a bison farmer who has supported legislation to make the Bible the official book of West Virginia. Her financial disclosure forms show her household controls a businesses that include real estate, car dealerships, and other investment assets worth $11 million.

Ms. Miller did not respond to requests for comment on Thursday.

Some voters said Mr. Ojeda had himself to blame for the poor showing. Carl Blevins, a retired coal miner in Chapmanville who said he did not like Mr. Trump and his style, said he also did not support Mr. Ojeda for some of the same reasons.

“He was his own worst enemy,” Mr. Blevins said, sitting with a group of friends on Wednesday at Tudor’s Biscuit World. “There’s an arrogance, like he knows more than the rest of us.”

Mr. Trump made a number of trips to West Virginia to stump for Republicans, most recently last Friday. He has singled out Mr. Ojeda personally, calling him “stone-cold crazy” and “a total wacko.”

Mary Frances, a 78-year-old from Dingess, said she had come to vote for the sole purpose of supporting the president. She said she supported Ms. Miller, even though she did not know much about her.

“There are too many crooked politicians — one is about as good as the next one,” she said. But Mr. Trump was different, she said, and he was protecting the country, including from the caravan of migrants, a large traveling group that moved from Central America into Mexico last month. “If all those people come in here it will decimate this country,” Ms. Frances said.

On Tuesday night, Mr. Ojeda pledged to keep fighting, but also pondered whether it was even possible for a Democrat to win in West Virginia’s Third Congressional District, which Mr. Trump won by nearly 50 points in 2016.

“Look, I really don’t know what to say,” he said. “I’m not happy with the outcome, but I’m telling you right now, any place else in the United States of America we would have won. Anyplace else. We just happened to run in the reddest — and I hate to say this — an area where people just completely will fall for what we just had.”

He added: “We had a president who came down here and said ‘Hey, I want you all to vote for her.’ They didn’t look and say, ‘Why should we vote for her?’”