Anastasia Onque was born just before midnight on a cold New Jersey evening in January. Jamira Eaddy-Onque pushed her out into the hands of a midwife, who set the baby on her mother’s chest. Ali Onque, the baby’s father, stretched a newborn hat over Anastasia’s wet hair, kissing her again and again as he lay with her and Ms. Eaddy-Onque in a wide, comfortable bed. The lights were dimmed and soft music was playing in the background.

The little family was safe and healthy. But this birth took place in a distressing context: New Jersey has the fourth highest maternal mortality rate in the United States, which as a country has the worst rates of maternal mortality in the industrialized world. Increasingly, experts are concluding that these grim rates are caused by racial inequities in America’s health care system.

Black mothers in the United States are four times as likely to die from maternity-related complications as white women. In New Jersey, it’s even more alarming: A Black woman is seven times as likely to die from pregnancy-related causes as a white one. The problem has become so dire that in January the state introduced a strategic plan to eliminate racial inequities and lower the rate of maternal mortality by 50 percent in the next five years. Gov. Phil Murphy has proposed a budget that will pay for many of the plan’s recommendations.

A growing awareness of these disparities, along with the fear of giving birth in a hospital during a pandemic, is leading some pregnant Black women to seek out other options. It’s one of the reasons Ms. Eaddy-Onque decided to use a birthing center when expecting her second child, Anastasia. 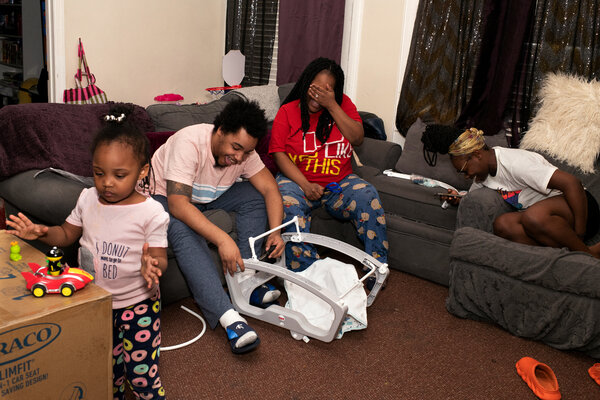 Birth centers are sort of halfway points between hospital births and home births. They serve women with low-risk pregnancies and use midwives, who have medical training, and doulas, a nonmedical position focused on emotional support, physical comfort and patient advocacy.

Giving birth presents a number of risks to mother and child, and those risks are difficult to measure. A government-financed study showed that clinical outcomes for mothers using birth centers and those using hospitals were virtually identical for low-risk women.

But birth centers aren’t necessarily a safe option for everyone. “Even in a low-risk labor, there are situations that can arise where you very quickly go from a low-risk situation to a high-risk situation or emergency,” said Dr. Timothy Fisher, medical director of the Northern New England Perinatal Quality Improvement Network. Those risks can be minimized through careful assessment of patients and communication between the midwife and their client, he said, and by having a “local system of care that’s well oiled to to deal with those times when transfer and transport are necessary.”

The Birth Center of New Jersey in Union, N.J., where Ms. Eaddy-Onque gave birth to Anastasia, has been increasingly busy during the pandemic. Founded and owned by Dr. Nicola Pemberton, a Black obstetrician-gynecologist, this facility is unusual in that it is run by a medical doctor who has admitting privileges at a nearby hospital and that it primarily serves people of color.

When Ms. Eaddy-Onque’s labor was taking longer than expected for a second-time mother, midwives used a variety of techniques to move her baby into a more optimal alignment. They squeezed her upper hips to open her pelvis and used a woven scarf to shake her hips. The team had her lie on her side, sit on a birthing ball, walk the hallways and use the shower and tub. The techniques were successful, helping her avoid a medical intervention like a cesarean section.

Cesareans are often lifesaving but not without risk and are thought to be significantly overused in the United States. Women looking to avoid them are among those increasingly seeking out-of-hospital births. Births in birth centers more than doubled from 2004 to 2017. In the United States, low-risk women overall had a rate of Cesarean of 27 percent in 2018, while women who used birth centers — who by definition are low risk — had a rate of 6 percent.

But free-standing birth centers are uncommon: There are only 400 nationwide, including three in New Jersey and three in New York City.

Birth centers are also often unavailable to the low-income communities, partly because they usually involve high out-of-pocket costs. Though the centers’ approach is said to save the health care system money, they often face low insurance reimbursements and can lose money when caring for patients using Medicaid. These financial factors are part of the reason birthing centers tend to avoid locating in poorer areas.

For Ms. Eaddy-Onque, her experience at the birth center was a welcome contrast from her first birth, where she said a doctor behaved like he was “at an auto body shop.” She said he instructed her brusquely, “Hey, Mom, open up for me,” as he tried to check her cervix without explaining who he was or what he intended to do.

“You’re supposed to be relaxed, trying to literally bring life into the world,” Ms. Eaddy-Onque said.

She had heard of Black women losing their babies or dying during childbirth, and she didn’t want Covid-19 protocols to dictate who could be with her during labor. “I don’t need to be further inconvenienced by a system that’s not going to listen to me,” she said.

“We’re talking about people who are at greater risk of experiencing racism, implicit bias, being marginalized in the health care setting,” said Rachel Hardeman, who researches reproductive health equity at the University of Minnesota. “There’s more of a need for people to be able to cultivate a space that feels good and feels safe for them. There are fewer opportunities to see that happen in a more traditional health care setting, and that’s problematic.”

This also influenced Laneta Lafayette’s choice to have her first child at the Birth Center. “I wanted to feel more in control or informed,” she said, “like I could identify with my birth workers in the same way that my grandmother was born with midwives in the South. It was this community experience where everyone rallied together as a part of the culture to guide this mother through her birth.”

Ms. Lafayette said it was important to her that women of color be part of her care. “I was just terrified of not being able to be heard and seen by my birthing team,” she said. “I liked that I was surrounded by Black women. That was the most comforting thing, like being in a womb of my own.”

Though Ms. Lafayette was eventually transferred to a hospital, she appreciated her time spent laboring in the Birth Center. While taking a shower there, she said, “I could see my reflection in the mirror. I just looked at myself and I was like: ‘Oh, my God, this is amazing. I’m beautiful, I’m giving birth.’ I think I’ll always remember that reflection of myself.”

Ms. Lafayette had a long and challenging labor, which began on Jan. 27. Dr. Pemberton induced labor in several ways before transferring her to a hospital for more monitoring and, ultimately, a Cesarean delivery. All birth centers have relationships with hospitals for when medical interventions become necessary, but it is less common for a doctor at a birth center to have admitting privileges at those hospitals. Dr. Pemberton does, which is a tremendous benefit for Birth Center patients who need medical intervention.

Ms. Lafayette was relieved to feel Dr. Pemberton’s familiar hand on her belly and hear her voice in the operating room. She trusted that she had exhausted her options for a vaginal birth and that, given her lack of dilation and the concerning fetal heart tones, a C-section was truly necessary.

Ms. Gabriel-Caldwell was with Ms. Lafayette and her husband throughout her labor, giving her back massages and sips of apple juice, coaching her through contractions, tucking her hair back and firmly instructing her to relax. She was with her at home, in the birth center and in the hospital after her baby, Nova, was born.

“I want to change the narrative of birth,” Ms. Gabriel-Caldwell explained. “I want people to see options. It’s really important that it stay beautiful.”

Alice Proujansky is a freelance journalist based in New York and is the recipient of a photography grant from the Magnum Foundation.