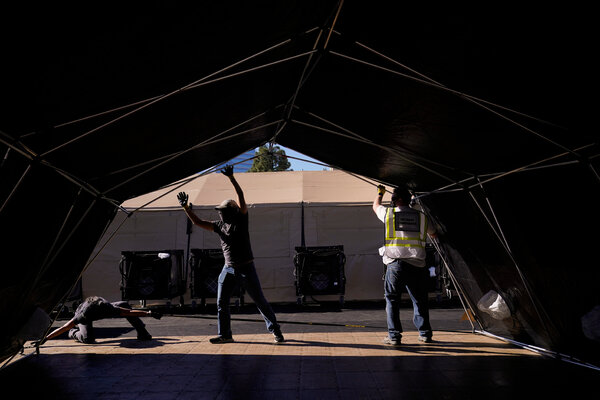 I wish I could start this holiday season on a brighter note.

But the reality is that California, for all the sunshine and warmth, is in the midst of one of its darkest winters.

Hospitalizations and deaths have continued to soar as the nation’s most populous state has emerged as the new epicenter of the coronavirus pandemic — and they don’t appear to be slowing down.

With just 2.5 percent of the state’s overall intensive care capacity available, officials have been rushing to get more so-called “field hospitals,” or alternative care sites, up and running. And discussions are underway about how to implement the state’s plans to ration care, which were put together earlier this year, as New York saw its hospitals overwhelmed with patients.

While Gov. Gavin Newsom didn’t officially extend what were supposed to be three-week stay-at-home orders affecting most of the state’s 40 million residents, he said Monday that it was “self-evident,” the orders would need to be in effect well into January, in light of projections that more than 90,000 people in California could be hospitalized with the virus in coming weeks.

The state added 295,000 cases over the past week, according to a New York Times database, and is likely to reach 300,000 new cases this week, given the virus’s trajectory. No other state has added even 150,000 cases in a week.

Mr. Newsom called on Californians to view their sacrifices as part of a widespread effort to mitigate the worst surge the state has experienced, even as hundreds of thousands of vaccine doses are being rushed to health care providers.

“We have agency,” he said, repeating a point he has made at various times throughout the pandemic. “The future is not something to experience — it’s something to manifest.”

The governor spoke from his home during a Monday news conference, where he is in quarantine for the second time because of exposure to a state employee who tested positive.

Mr. Newsom has tested negative, but he said that he, like tens of thousands of other Californians, will spend Christmas isolated even from his family.

“These quarantines aren’t easy on anybody,” he said.

But leaders have painted an increasingly bleak picture if Californians fail to heed guidelines.

Mayor Eric Garcetti of Los Angeles, who was also in quarantine after his 9-year-old daughter tested positive for the virus, on Monday evening described the surge pummeling the nation’s second biggest city as “the greatest challenge” it has ever faced. He pleaded with Angelenos to stay home; there’s not much more officials can do otherwise.

[If you missed it, here’s what to know about the regional stay at home orders.]

Dr. Mark Ghaly, the state’s secretary of health and human services, said in Monday’s news conference that health care providers and state and local leaders were working frantically to prevent the state’s health care systems from tipping into what he and the governor described as crisis mode.

“We continue to build up our capacity,” he said. “When we look forward to that forecast of quite a few patients toward the end of January — that’s not a story that’s already been written.”

But as has been the case in the last couple of months, making sure health care facilities are sufficiently staffed has been the biggest hurdle. Nurses, doctors, janitors and so many others are exhausted. Help from other states and the federal government is scarce as so much of the nation suffers from the rapid spread of Covid-19.

[See the intensive care unit capacity at hospitals near you.]

In the next week or so, more Californians could hear that many hospitals are simply full. Patients who are unable to avoid going to the hospital will encounter hourslong waits in hallways.

The mere possibility that California’s caseload could overwhelm even the state’s emergency surge capacity is likely to harm workers, said Joanne Spetz, a professor at the Philip R. Lee Institute for Health Policy Studies at the University of California, San Francisco.

“The term psychologists use is ‘moral distress,’” she said. “And that is a huge, looming and developing issue among health professionals.”

Increasing numbers of nurses and doctors are returning home at the end of their shifts feeling as if they were unable to provide the best care possible to everyone who sought it.

“I don’t think there will be designations or anything like that,” she said. More people are likely to avoid going to the hospital for distress unrelated to Covid-19. And people who do have the virus are more likely to be told to wait to go to a hospital if at all possible, which could lead to more deaths.

And while California has long had a lower death rate than many states among people who are hospitalized with Covid-19, she said that the strain on intensive care units and emergency departments could cause that to change.

Dr. Spetz said that — like so many of the problems the pandemic has painfully exposed — the challenges in staffing intensive care units and emergency departments have been built up in California over years.

The irony, she said, is that the shortages are born of largely effective efforts to keep people out of hospitals through better primary care and other methods.

So a glut of recent nursing school graduates hasn’t translated into enough replacements for experienced intensive care and emergency room nurses, whose long-honed skills are so desperately needed right now.

One piece of good news? State leaders said they haven’t seen any evidence of the new variant of the coronavirus in California — yet.

A man dressed as Santa was rescued after he got stuck in some power lines while flying a powered parachute. He was reportedly on his way to deliver candy canes to neighborhood children. He was OK. [KCRA]

Do you want to read a deep dive into all aspects of Ariana Grande’s recent engagement to a Los Angeles luxury real estate agent? Of course you do. [The New York Times]

Need a different kind of escape? Find the biggest screen you can, and look at these images of a Swedish winter wonderland. [The New York Times]

Or find some photos of the Great Conjunction from last night. And read about what it means. [The New York Times]