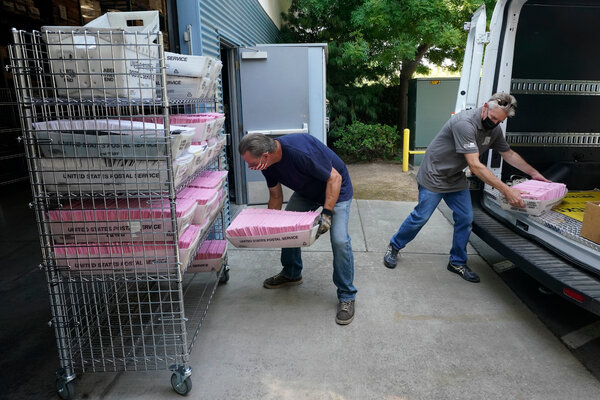 Unlike the sprawling forms Californians usually contend with in the voting booths, the ballots for the recall election of Gov. Gavin Newsom ask only two questions:

Should Newsom be recalled? And who should replace him?

But, if my inbox is any indication, the short ballot is far from simple.

I’ve gotten questions from opponents of the recall who want to know whether answering the second question will invalidate their “no” vote on the first (it won’t). Some Democrats are looking for guidance on choosing the least conservative Republican replacement, in case the recall succeeds. And many voters are befuddled as to why Newsom has been telling people to ignore the second question all together.

“The single greatest confusion of this election is what your rights are in participating in the replacement election,” Raphael Sonenshein, the executive director of the Pat Brown Institute for Public Affairs at California State University, Los Angeles, told me. “Voting should be simple, and this is not so simple.”

A tricky political calculus for Democrats

California’s peculiar recall laws dating back to 1911 shoulder most of the blame for this mess.

Recalls here are a two-step process: Voters decide whether to remove a candidate from office, and also who should be the replacement. (There are some states where the lieutenant governor automatically takes over for a recalled governor, but most states have voters select the replacement.)

What’s unusual about California’s law is that it requires both elections to happen on the same day, on the same ballot. And the incumbent, in this case Newsom, is barred from running in the replacement election.

So that leaves Democrats to negotiate a tricky political calculus: How do you endorse a replacement candidate when you don’t want the governor to be replaced at all?

Well, there’s Option A: Support a politically aligned Democrat in the replacement race and hope the candidate isn’t so popular that people vote to recall Newsom because they’d prefer the backup. Or, Option B: Ignore the second question and focus on the first.

The latter seems to be Newsom’s strategy. “One question. One answer. No on the recall. Move on. Send in the ballot,” the governor said recently.

In the 2003 recall election of another Democratic governor, Gray Davis, the party went the other route. Cruz Bustamante, the popular Democratic lieutenant governor, ran as a replacement candidate. Yet when Davis was ousted, he was replaced by Arnold Schwarzenegger, a Republican candidate.

Joshua Spivak, a senior fellow at Wagner College’s Hugh L. Carey Institute for Government Reform, said there’s no evidence that having a prominent candidate from your party on the replacement ballot increases your odds of staying in office. In other words, Newsom’s strategy may be the best way for him to win the recall.

Bustamante himself, who now runs a consulting firm, told The Los Angeles Times last month that he supported the party’s decision not to endorse a replacement. On his own ballot, he said, he left the second question blank.

The downside of leaving ballots blank

In a poll released Wednesday, 49 percent of likely voters said they either wouldn’t fill out the second question or didn’t know who to vote for. Some California newspapers that have endorsed voting against the recall have recommended leaving the second question blank, while others have urged the opposite.

I’ve gotten a handful of emails from people who said they wrote in Newsom’s name for the second question, even though they knew it wouldn’t count. They just didn’t know what else to do.

Jessica Levinson, who teaches election law at Loyola Law School in Los Angeles, said it was a “disaster” that members of the Democratic Party, who are supposed to be champions of voting rights, are advising people to leave parts of their ballots blank.

“Why would you say don’t even exercise your right to weigh in for who the next governor could be?” she said.

Levinson added that it was strategic for the Democratic Party not to endorse an alternative to Newsom. He will most likely run for governor again in 2022, she said, and it would be easier to win against a Republican, especially one who secured only a small fraction of votes in the recall election.

The New York Times has answers to your frequently asked questions about the recall election. Scroll to the bottom of the page for links to endorsements by California newspapers.

Democrats are hoping the new Texas law banning most abortions will motivate voters to support their party. Newsom warned on Twitter this week that the Texas ban “could be the future of CA” if the recall were successful. Read more from my colleague Reid J. Epstein on the political ripples of the Texas legislation.

In case you missed it, a poll released on Wednesday shows strong support for Newsom, with 58 percent of likely voters saying they would reject the recall. Read more from Politico.

In 1911, California voters overwhelmingly approved a ballot measure that made the state the third to allow recalls. I wrote about the history of recalls this week.

More than five million ballots have already been turned in. Keep track here.

Not ready for climate change: Disasters cascading across the country this summer, including California’s wildfires, have exposed a harsh reality: The United States is not ready for the extreme weather that is becoming more frequent as a result of a warming planet. Read more from The Times.

Who can afford a home: California is home to the four metropolitan areas in the nation where it is most difficult to secure a mortgage. At the top of the list is San Jose, where home buyers need an annual income of $286,703 to qualify for a mortgage for an average-priced home.

Theranos trial: A jury of 12 residents of Northern California was sworn in on Thursday for the fraud trial of Elizabeth Holmes, the disgraced founder of the blood testing start-up Theranos.

Caldor fire: The authorities said on Thursday that the wind was working in their favor, and that for now, they hoped to keep the blaze from reaching Lake Tahoe.

The best rivalry in sports: The Giants and the Dodgers, tied for first place in the National League West, reignite their century-plus rivalry as they kick off a three-game series tonight, reports The Los Angeles Times.

Rubber bullet restrictions: Under a bill that advanced through the State Legislature on Thursday, California would restrict the use of rubber bullets and chemical irritants during protests, reports The Associated Press.

Lawmakers take aim at Amazon: A state bill expected to reach the Senate this week is aimed at cracking down on Amazon’s harsh warehouse work conditions, reports The Bakersfield Californian.

Jobless claims drop: For the first time since October 2020, claims for unemployment in California have declined for three consecutive weeks, The Orange County Register reports.

Vaccines for students: With a vaccine for children under 12 in the pipeline, many school districts are watching how things play out at Culver City Unified, which recently became the first district in the state to tell students 12 and older that if they’re not vaccinated, they can’t be on campus, Capital & Main reports.

School closures: Cecily Myart-Cruz, president of the United Teachers Los Angeles union, has pushed to keep classrooms closed. Some say she’s a progressive fighter; others consider her an incendiary leader whose gamesmanship during the pandemic has hurt students. Read more from Los Angeles magazine.

Excessive force reforms: The Justice Department has ordered the San Luis Obispo County sheriff to make reforms at the county jail facility after finding evidence of substandard medical care and excessive use of force, reports The Los Angeles Times.

Online harassment: A Yokut native started an online petition that eventually led to Fresno High School removing Native American imagery from its logo. But he has since been the target of online harassment and now plans to take legal action, The Fresno Bee reports.

Teacher controversy: A Sacramento school district is investigating a teacher who was allegedly caught on video claiming he keeps an antifa flag in his classroom. The video was filmed by the right-wing organization Project Veritas, reports CBS Sacramento.

Windsor mayor’s race: Former Mayor Dominic Foppoli of Windsor, who resigned in May under a cloud of sexual assault and misconduct claims, has filed paperwork signaling his intent to run for his old seat in November 2022, reports The Press Democrat.

In her latest newsletter, The Times’s California restaurant critic, Tejal Rao, shares panzanella recipes, which give a second life to stale bread.

Today’s travel tip comes from Mackenzie Skye, a reader who recommends visiting Mendocino, which she calls “truly one of the most beautiful places.”

Tell us about the best spots to visit in California. Email your suggestions to [email protected] We’ll be sharing more in upcoming editions of the newsletter.

This week I finished reading “Breath: The New Science of a Lost Art” by the journalist James Nestor. It’s no easy feat to write about biology and medicine in a breezy, even funny way, but Nestor pulls it off.

Will there be any other statewide measures on the ballot?

No, only the recall. There wasn’t enough time for any ballot initiatives to qualify.

Read answers to more of your frequently asked questions about the California recall election.

Tell us what else you want to know about the recall. Email your questions to [email protected]

The Dapper Dans, the pinstripe-suit-clad, straw-hat-wearing, a cappella singing group, is returning to Disneyland on Friday.

The barbershop quartet is set to return to Main Street U.S.A. as part of the next phase of the park’s reopening, reports The Orange County Register.

The group had its first rehearsal last week after the pandemic kept it apart for 17 months. The Dans are prepping Halloween dance numbers and songs, plus a bonus.

Thanks for reading. I’ll be back on Tuesday. Enjoy your long weekend. — Soumya

Steven Moity and Miles McKinley contributed to California Today. You can reach the team at [email protected].