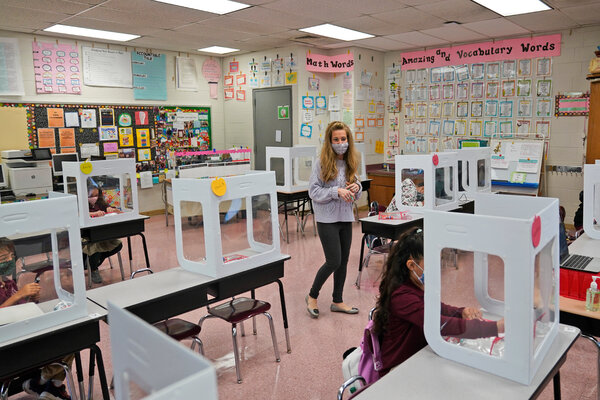 Before coronavirus vaccines, and before spring weather, many families across the country opted to keep students in remote learning for fear of the pandemic’s spread. But now, our colleague Dana Goldstein reports, their reasons have changed.

“If you close schools down for the better part of a year or, in some places, for over a year, it is actually not as simple as throwing open the doors in terms of getting the people back,” Dana told us.

Across the country, “school hesitancy” abounds as families have established routines based on remote learning. Some are reluctant to interrupt their newfound stable alternatives for a return peppered by hybrid schedules — with students in class some days of the week and working from home on others — or the risk of closures and quarantines.

Dana found that other families, limited by language barriers or poor communication from districts, didn’t even know their schools had reopened. And some teenagers from low-income families have taken on full- or part-time jobs to help their families make ends meet, so remote learning works better for them.

Pauline Rojas, 18, works 20 to 40 hours per week at a fast-food restaurant, and has used the money to help pay her family’s internet bill, buy clothes and save for a car. Her high school in San Antonio, Texas, is open, but her shift starts just minutes after her class ends. She couldn’t get there in time if she were coming from in-person class, Dana said.

“I wanted to take the stress off my mom,” Pauline told Dana. “I’m no longer a kid. I’m capable of having a job, holding a job and making my own money.”

Although only 12 percent of American elementary and middle schools remain fully closed, according to a federal survey, more than a third of fourth and eighth graders remain remote. An even larger group of high school students is still learning remotely, even though only a minority of high schools remain closed. (In Los Angeles, only 7 percent of high school students are back, The Los Angeles Times reports.) And across ages, a majority of Black, Hispanic and Asian-American students remain out of school.

Superintendents and school leaders are now in a bind. Most believe that endless remote school poses academic and social risks for kids, but they don’t want to pressure families. Continuing adherence to social-distancing guidance also means most schools can’t operate at full capacity, and staffing remains an issue.

Districts could take remote learning off the table for the fall, but some are worried about doing so while the virus is still circulating widely.

“It’s a live question,” Dana said. “I don’t think we can generalize yet what the fall will look like.”

Changing the admissions criteria for selective public high schools, many of which admit few Black or Latino students, has emerged as one of the most fraught educational debates in recent years.

Mayor Bill de Blasio of New York failed in 2019 in an attempt to eliminate the entrance exam to elite schools like Stuyvesant High School and the Bronx High School of Science, facing opposition from Asian lawmakers and a lobbying campaign financed by a billionaire. He has not tried again.

But elsewhere in the country this school year, a combination of the coronavirus pandemic and the response to the police killing of George Floyd has prompted several other districts to make major changes in how they admit students to their top schools.

San Francisco ended an admissions system for its Lowell High School that was based primarily on grades and test scores, replacing it with a lottery system.

Fairfax County Public Schools in Virginia eliminated the test to get into the Thomas Jefferson High School for Science and Technology, or T.J., as it is known, replacing it with a holistic process, in which students complete a math or science problem-solving essay. Evaluators are required to take into account whether a student is low-income, has disabilities, is an English language learner or comes from a historically underrepresented middle school.