Faiqa Naqvi, a 15-year-old freshman at a New Jersey public high school, logs in to her all-remote classes each night from Pakistan in a time zone nine hours ahead.

Max Rodriquez, who also attends school in New Jersey, joined his Advanced Placement history class for about two months from Guayaquil, Ecuador, a port city on the coast of South America.

In the midst of the pandemic, in a year when almost nothing about school has been normal, administrators and teachers are grappling with a fresh layer of complexity: students accessing virtual classes from outside the United States.

Faced with pandemic-related financial strain at home or the health needs of relatives abroad, some students in immigrant communities are logging in to school from thousands of miles away.

It is unclear how widespread the practice is. But out-of-country logins have become increasingly common since late fall, as comfort levels with air travel grew and holidays popular for overseas visits, particularly in immigrant communities, approached, according to educators in New York and New Jersey and as far away as Florida and California.

Some families said they took advantage of the newfound mobility afforded by remote instruction to plan extended visits with relatives they had not seen in years.

Others have temporarily left the country to care for sick relatives, and some have told principals and teachers that they sent their children abroad because they needed help with child care to continue working at jobs that cannot be done from home.

“The brand-new immigrants — they have it hardest,” said Aixa Rodriguez, who teaches English as a new language at a middle school in Manhattan. “They have no one here to help.”

At least one of her students logged in from outside the United States over the last several months.

Nate Floro, a high school teacher in Brooklyn, said that three of his students had been logging in to class from Yemen, Egypt and the Dominican Republic.

The practice, Ms. Rodriguez said, is an open secret among teachers as parents struggle to navigate the limited number of days and hours that students attend in-person instruction and the constant threat of Covid-19-related school closures.

“The reality is the parents can’t handle this inconsistency,” said Ms. Rodriguez, who lives in the Bronx and is a leader of a social justice advocacy group within the teachers union, MORE, or Movement of Rank and File Educators. “These parents have to work and do not have an option.”

The willingness to place a child in the care of a relative in another country in the middle of a pandemic, she said, “tells you about unmet need and desperation.”

By adding a level of complication to remote learning, the pattern has the potential to compound learning loss, experts say, particularly in poor and minority communities already plagued by achievement gaps.

“It’s one thing to say kids can log in anytime, anywhere,” said Mike Magee, chief executive of Chiefs for Change, a nonprofit national network of education leaders. “But if they’ve gone someplace where they need to log in at 2 a.m., that doesn’t seem ideal.”

Danielle Filson, a spokeswoman for New York City’s public schools, the country’s largest district where classrooms are now open to all ages of students, said she could not provide data on students who might be logging in from outside the country.

In New Jersey, officials with two of the state’s largest districts, Paterson and Elizabeth, were able to provide a snapshot of students who were logging in from IP addresses outside the United States. Schools in both cities have been closed for more than a year and all instruction has been offered remotely; Elizabeth expects to reopen to some students next week, but Paterson reversed a plan to restart face-to-face instruction May 3, and has not set a return date.

In Paterson, a recent one-day sampling of 5,400 students showed that 306 children were logged in from outside the country, the deputy superintendent, Susana Peron, said. The district educates nearly 25,000 kindergarten to 12th-grade students, and the actual number of students learning from outside the United States could be far higher.

“We of course don’t encourage it,” Ms. Peron said. “But families here have just faced so many challenges during the pandemic.”

“I’d rather have them learning from wherever they are,” she added, “than not.”

Elizabeth, a city of 129,000 residents about 20 miles southwest of Midtown Manhattan, is one of the most immigrant-rich communities in the state. More than 75 percent of families speak languages other than English at home, and nearly one in five residents reports income below the poverty level, census data show. 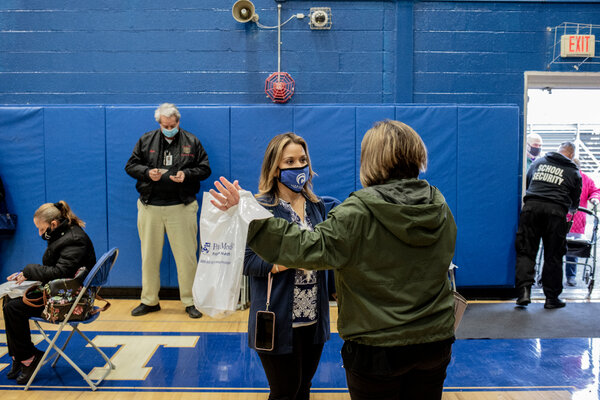 On a day in early March, 679 of the district’s nearly 28,000 public school students were logged in from outside the United States, a spokesman, Pat Politano, said. Several weeks later, days before the start of a weeklong spring break, 767 students — about 2.7 percent of students — were attending class from one of 24 countries, records show.

Most were tuned in from Caribbean countries; the Dominican Republic was the most common location. But there was one child each in Kenya, Moldova and Bangladesh. Five students — including Faiqa — were in Pakistan.

“I had some home issues,” Faiqa said in one of a series of emails, “so I had to come to Pakistan for some time.”

She and her sister and parents left New Jersey at the beginning of March and plan to return April 20. Because of the time difference in a country 7,000 miles away, Faiqa finishes her virtual school sessions around 9:30 p.m. each day.

“That’s hard for me,” she said. Still, a teacher said that Faiqa, who hopes to become a doctor, was often among the first to answer questions.