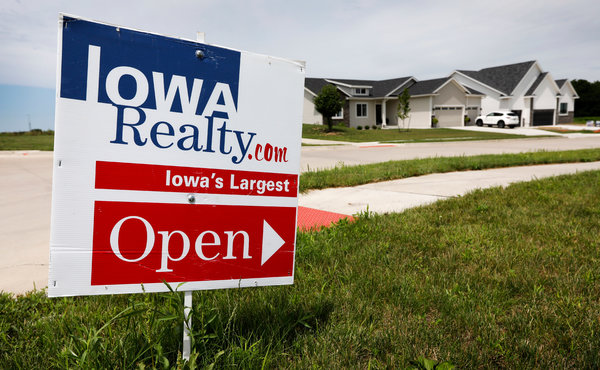 These should be happy times for the housing sector. The economy is booming, with more people working at higher pay, and with the sizable millennial generation reaching prime home buying age.

Instead, the housing market has gone soft, acting as a drag on the overall economy rather than as a force propelling it forward.

Sales of new single-family homes were down 22 percent in September from their recent high in November 2017, and existing home sales in September were down 10 percent. This tepid residential investment subtracted from G.D.P. growth in each of the first three quarters of 2018.

Home prices have not declined nationally, at least according to the most widely followed indexes. But their rate of increase has declined, and more and more home sellers are finding they must reduce asking prices to find a buyer.

Given how central housing is to the broader economy — it is the biggest driver of both wealth and indebtedness for most families, and its fluctuations have frequently been major factors in past booms and busts — this slump isn’t something to be taken lightly for anyone hoping the good times will last.

So what’s going on?

When you look closely at the data, it appears this paradox of a strong economy and a weak housing market is, at its core, an illustration of a fundamental rule in economics: If something can’t go on forever, it won’t.

Home prices in a given location are ultimately tethered to the incomes of the people who either live there or want to. But for much of the last six years, that relationship has come undone.

Nationally, personal income per capita has risen 25 percent since the end of 2011, while the S&P/Case-Shiller national home price index is up 48 percent (neither figure is adjusted for inflation).

The gap is even larger in the big coastal cities with high wages and booming job markets, but where legal and other barriers make it hard for builders to add to the supply of homes. In the San Francisco metro area, per capita personal income rose 40 percent from 2011 to 2017, while home prices rose 96 percent. Similar patterns are evident in Los Angeles, Seattle, Boston, New York and Washington.

In less high-flying markets, there was still a disconnect. In the Minneapolis area, for example, incomes rose 22 percent while home prices rose 46 percent.

Those rising home prices got help from years of very low mortgage rates, which put more expensive homes within reach for people at a given income level. Activity was also probably boosted by some bounce-back effect after the housing market crash of 2007-09, a result of pent-up demand for homes that were not bought while the market was collapsing.

Rates bottomed out in late 2012 at 3.31 percent for a 30-year fixed-rate mortgage. They have been moving upward in fits and starts since, including a full percentage point in the last year alone to nearly 5 percent — still low by historical standards, but high compared with the ultralow levels that had enabled these huge price gains.

There’s no doubt that demographics are favorable for housing demand. The peak birth year for millennials was 1990; it’s a group that is turning 28 this year and thus entering prime years for home buying. As it happens, 28 is exactly the median response in a Bankrate survey that asked adults for the ideal age to buy a home.

But that doesn’t matter if prices are out of reach relative to incomes. Moreover, lending standards have remained more rigorous than they were during the last housing boom, so it has been harder for people to stretch to buy a home. The inability of people to buy homes they can’t really afford is great news in terms of avoiding another crisis, but not so great for the near-term outlook for housing.

“Buyers can only stomach so many price increases until it gets unsustainable,” said Daryl Fairweather, the chief economist at the online brokerage Redfin. “Prices reached a breaking point where buyers were fed up and started to consider other options,” she said, including renting and moving away from the expensive coastal markets where prices are most out of whack with incomes.

As Economics 101 teaches, price movements are the way that supply and demand match up with each other. But in the housing sector especially, that adjustment can take a while.

In contrast with the stock market, where relatively unemotional traders are buying and selling shares every day and the market stays liquid, home purchase and sales decisions can take months and are deeply emotional for the participants.

What seems to be happening is that sellers are trying to cling to the spring 2018 prices that their neighbors received, while there aren’t enough buyers in late 2018 willing or able to pay those prices.

You would expect, in a zero-sum transaction like a home sale, for those numbers to move in opposite directions. Instead, it seems that sellers are unhappily realizing that they aren’t going to get what they thought their house was worth six months ago, and buyers still think homes are too expensive.

That helps explain why transaction volume, especially for new houses, has fallen substantially while prices haven’t (at least yet). It’s a standoff. And the outcome of the standoff will, in the aggregate, play a role in shaping the future of the economy.

There is precedent for this, and it isn’t a happy one. In the last housing boom, new home sales peaked in July 2005, and home prices didn’t start declining until May 2006. It didn’t start to hurt the overall economy until December 2007, when the damage had spread through an overleveraged global financial system.

But that doesn’t mean this episode has to end in tears. Home prices are not nearly as out of line with incomes as they were then; speculative activity hasn’t been nearly as frothy; and consumer debt levels are considerably more measured.

“I think income growth will help us get out of this period,” said Robert Dietz, the chief economist at the National Association of Home Builders. “We’re probably looking at a period where existing home sales volume is flat to declining, and it now looks like 2017 was the peak year for transaction volume.”

A strong (nonhousing) economy makes it more likely that this housing slump will end without a steep 2008-style downturn. So does the basic reality that young adults are forming families and need a place to house them.

But in the meantime, it could be a soft few months or even years of standoffs between buyers and sellers, with the big question of which comes first: sellers who settle for less after recognizing that the price they thought they would get is beyond the reach of buyers, or incomes that catch up with a housing market that got a little ahead of itself.

Neil Irwin is a senior economics correspondent for The Upshot. He previously wrote for The Washington Post and is the author of “The Alchemists: Three Central Bankers and a World on Fire.” @Neil_Irwin • Facebook