A message about the pandemic, inscribed on $1,200 worth of coins, is trickling into New York’s shops, and possibly your pocket. 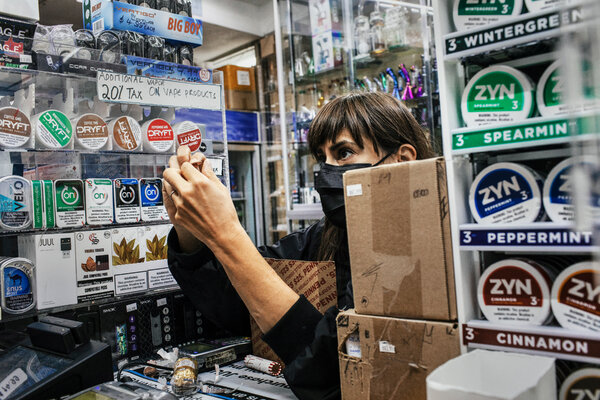 A conceptual artist walked into a bodega during a pandemic carrying a box full of pennies.

The place was one of those ubiquitous New York smoke shops that uses tobacco pipes in their signage instead of the letter “S.” The artist was named Jill Magid, and she approached the man at the counter, giving a pitch that she didn’t quite have down to elevator length.

“I want to pay for this in pennies,” she said, picking up some Ferrero Rocher chocolates. “They’re engraved as part of a dispersed monument. See?”

The clerk put on his glasses and squinted at the edge of a coin. “The. Body. Was. Already. So …”

“Fragile!” Ms. Magid finished for him. “You have good eyes.”

“It’s too small,” the clerk concluded.

In the end, he seemed to understand. He accepted the pennies, and Ms. Magid strolled out with her chocolates. She had several hundred more bodegas to go.

Last week, Ms. Magid was walking around the Financial District and dispersing hundreds of pennies, the first portion of a complex public artwork she calls “Tender.” She had already spent four months securing the coins from various banks and finding a man in Sheepshead Bay who could build a machine to engrave their sides with the same tiny text. 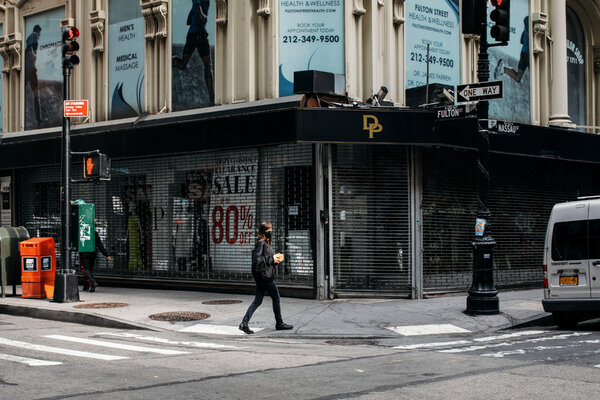 The plan? Ultimately to inject 120,000 pennies into the economy of the five boroughs throughout the year, with that number being symbolic of the $1,200 checks that many Americans received at the beginning of the coronavirus outbreak. For most of the project, she would be followed by a Brink’s armored truck — meant to evoke the mobile morgues that had become one of the most enduring images of a pandemic-stricken city. But for now she was on foot.

“This part of the project is, excuse the pun, the most pedestrian,” Ms. Magid said, walking to the next drop-off point.

The artist was referring not only to the literal act of walking around New York City but also the fact that the dispersal of coins was the least cerebral part of the endeavor. “Tender,” which was funded by the nonprofit arts group Creative Time, is supposed to bring art to regular people. But given that the totality of its meaning depends on many details, down to the font used for the coins, it was no wonder that those regular people sometimes got confused.

“Some people are open to the idea, but others are just like, ‘So what are you buying?’” Ms. Magid said. The clerk at the smoke shop accepted her novel form of payment fairly quickly, but the rest of the day’s transactions were not quite as seamless.

As a conceptual artist, Ms. Magid focuses on creating moments of exchange with people she might not otherwise spend time with. In 2007, she offered to teach a New York police officer about art in return for shadowing him. (He declined the lessons, but let her follow him around and gave her a hollow-point bullet.)

Her art also has a stunt quality. In 2015, she exhumed the remains of Luis Barragán, the great Mexican architect, and ultimately enlisted a laboratory to pressurize the carbon of the bones into a diamond. “The Proposal,” the film she made about trying to trade the jewel made from Barragán’s bones for access to his archive, was well received. Many Mexicans, though, were less than thrilled, with some critics likening the work to necrophilia and others demanding an investigation into how that was even allowed to happen.

Ms. Magid, 47, is a slight but striking woman who once trained as a spy. She is featured prominently in her film, seen languidly smoking while providing thoughtful voice-over on institutional power.

“Tender” was a different kind of project. “Usually in my work, I’m the protagonist,” she said, “but with this one I want to disappear.” For the penny distribution, she was dressed like an extra — from her zip-up Chelsea boots to her mask, she was in all black — though she was on the way to meet a film crew meant to record a transaction across from One World Trade.

When Ms. Magid got to the meeting spot on Vesey Street, at least a half-dozen people were waiting for her. The area was relatively free of traffic, and it seemed like securing the shot of her walking into a bodega and dropping off the coin rolls would be a cinch. But by the time they set up the equipment and the Brink’s truck had arrived, at around 11:30 a.m., cars had started spilling out of an adjacent parking garage, complicating the shot. It took more than 40 minutes to capture it.

For their part, bodega workers in the area were unenthused about the project. Ms. Magid dutifully explained it to each of them, and suggested that they might, in turn, explain it to customers who receive the pennies as change. She also requested that they not take the rolls to the bank for cash, so that they would circulate quickly.

“What she was saying to me doesn’t go in my head,” said a shop owner near Wall Street who identified himself only as Khan. “I am in the grocery business, so why should I care about politics?”

Some bodega workers said later in interviews that they had no time to explain the concept of dispersed monuments to customers who were coming in on 15-minute breaks from construction jobs to buy a Gatorade; others said people were increasingly refusing change since the pandemic started; many more said there were no customers at all. “There used to always be a queue, but now I have time to sit and watch TV,” said the owner of a bodega on Nassau Street who had applied for but not yet received a loan to keep his store afloat. “Who cares about this when my business is down 90 percent?”

Ms. Magid, however, did find an enthusiastic supporter to circulate her coins. Before the Brink’s Truck and the film crew got involved, she walked into another Smoke Shop, on Liberty Street. She tried to explain to the worker, Ali, what she was doing, though he seemed a little confused. There’s a coin shortage; he wanted to know if she had any quarters.

Abraham Cessay stopped sweeping the sidewalk outside when he realized a woman was giving away money. He asked if Ms. Magid could spare two more rolls, and she handed him a pair of etched pennies instead.

“Sometimes there’s a language barrier,” she said, “but people get the project if you explain it to them.”

Mr. Cessay, who is 56, later said he did not particularly care about the project. He emigrated from Gambia 20 years ago and worked as an interpreter for the New York City court system before Covid temporarily eliminated that income. He takes the bus from Jersey City to work as a building porter in the Financial District every day. He pays for his commute in coins and often picks up spare change from the ground.