When Med Abrous, a restaurateur behind trendy establishments in Los Angeles, Nashville and Seattle, got the call about opening a restaurant on Roosevelt Island in New York, he almost hung up the phone.

“The last time I was at Roosevelt Island was probably in the third grade for a class trip, where we took the tram, ” said Mr. Abrous, who grew up in New York City. “All I remember is we learned something about smallpox, and then I never went back.” (In the 1800s the island, now a quiet residential neighborhood, was the repository for several city asylums and hospitals, including one for smallpox, as well as a prison).

The restaurant would be part of Graduate, Roosevelt Island’s first hotel, which opened this month. The property is on the campus of Cornell Tech, a hub for cutting-edge graduate students in tech, design, law and business, which opened four years ago. Although the university has been a boon to the community — which was redeveloped starting in the mid-20th century and has plenty of dated architecture to prove it — would a stylish hotel and restaurant really work out here?

“People who have lived in New York City for 20 or 30 years have never been to Roosevelt Island,” said Ben Weprin, the founder and chief executive of Graduate Hotels. “That is the biggest challenge, to educate people on how close and easy and fun Roosevelt Island is.” 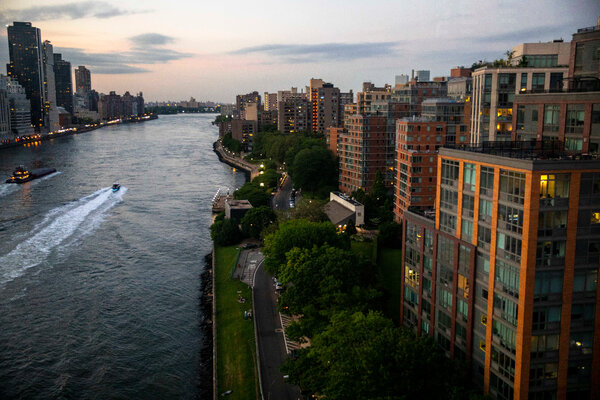 Mr. Abrous and his business partner agreed to at least visit the site, and he was immediately impressed. “I was taken aback just being in the middle of the East River,” he said. New high-rises were plentiful, and the rooftop of the hotel offered views of several New York City landmarks, from the United Nations building across the river to One World Trade Center farther south.

He signed on to create the Panorama Room, a bar and lounge with the very same rooftop views that seduced him, and he is aiming for a splashy midsummer opening. The idea is to make the restaurant a destination unto itself. “I’ll go into deep Brooklyn or Queens for a great meal,” he said, adding that he wants Roosevelt Island to be a destination, too. “We want this place to have the same weightiness as the Rainbow Room or Windows of the World,” he said.

In a way, the combination of Cornell Tech’s opening and the pandemic’s hitting the city has given Roosevelt Island a new chance at the spotlight. In addition to the hundreds of graduate students who have moved there, other New Yorkers in search of green space and affordable rents have gobbled up real estate. Several longtime residents are recommitting to the area, opening yoga studios and restaurants. And then there is Graduate, with its rooftop bar.

“It’s funny, having lived here so long, to see something so artsy and modern and hip coming to the neighborhood,” said Amanda Baehr Fuller, 48, an illustrator who has lived on the island for 15 years. “In the past we used to hear about things possibly opening, and years would go by and it would never happen,” she continued. “Now it’s getting better.”

Although many locals are thrilled about the attention the island is getting, the population of around 14,000 is still not enough to keep these new businesses thriving, said Shelton J. Haynes, the president and chief operating officer of the Roosevelt Island Operating Corporation, which functions like a local government.

“These small businesses definitely need tourists to come in,” he said. “Many were hit very hard during the pandemic. Especially now, they need a hybrid of residents as well as tourism to stay alive.” The corporation is considering a series of free tours, both on foot and by bus, to bring in more people, Mr. Haynes said.

So it all hinges on foot traffic. The island battles an unfair reputation as being hard to reach despite access from the F train, the ferry, the Queensboro Bridge and of course the island’s unique tram. “We are still in the middle of the East River, and I am reminded of it all the time,” Mr. Abrous said. “This may have been a completely crazy idea,” he said of his decision to commit to Roosevelt Island.

In these late-pandemic days, the appeal of the area is obvious. It’s possible to walk through its parks and not see another human. Families, especially, appreciate the open fields, tree-lined promenades and playgrounds. Later this summer, Southpoint Park will open on the southern tip of the island. “It will be similar to Brooklyn Bridge Park, where you can walk right up to the water,” Mr. Haynes said.

For people interested in living here, there is currently a wait list for three-bedroom apartments, which is unprecedented, according to Chris Schmidt, a senior vice president at the real estate firm Related Companies, which owns eight (and soon to be nine) buildings on the island.

Last summer, Paul Krikler, 60, who owns a consulting and business coaching business, moved to Roosevelt Island from the Upper East Side of Manhattan with his three teenage children. “It’s so calm and peaceful and quiet,” he said. “There is green everywhere and water everywhere and public benches everywhere. During the pandemic having that space was just lovely.” He likes how people bring hammocks and hang them between the trees.

An adjustment for him, however, was the lack of amenities. “There’s very limited shopping here, so you have to use Amazon and make the most use of your time when you’re on the mainland,” he said. “For example, there is no bike shop.” Mr. Krikler is working to change this by getting a mobile bike shop to visit the island regularly.

Before the pandemic there was one of everything, said David Kramer, who oversees Related’s retail spaces for Roosevelt Island. “There was a pizzeria, a Japanese restaurant, a Greek diner, a Chinese restaurant and a supermarket,” he said.

In the past year, however, more specialty offerings have arrived. Wholesome Macelleria, a high-end butcher shop, opened over the winter. Last September came Granny Annie’s, a restaurant that became a go-to spot for cocktails. And this summer, Graduate will introduce two new restaurants overseen by Mr. Abrous.

Jax Schott, who has lived on the island for over 12 years and is a yoga and barre instructor, is opening the island’s first dedicated yoga and barre studio, Island Om, this summer. She’s transforming a 2,000-square-foot space on Main Street that used to be a makeshift batting cage. “We have a lot of wellness people on the island, and I am trying to figure out how to bring them together and make this a sort of hub for the community,” she said.

The hope is that the 224-room Graduate Hotel will lift up the other businesses. The property has gone out of its way to be bold. In the lobby is a 12-foot statue by Hebru Brantley, an artist known for his Afrofuturist style, as well as 5,000 square feet of shelved vintage textbooks. There is a meeting room inspired by the Tom Hanks movie “Big,” with a giant piano mat and a Zoltar machine.

“We need people to come and be, like, ‘Holy shoot, I can’t wait to bring my friends here,’ ” Mr. Weprin said. “We have to make this a landmark of the city.”