With a typewriter and a mailbox, a sidewalk project explores the art of consoling those who need good news. 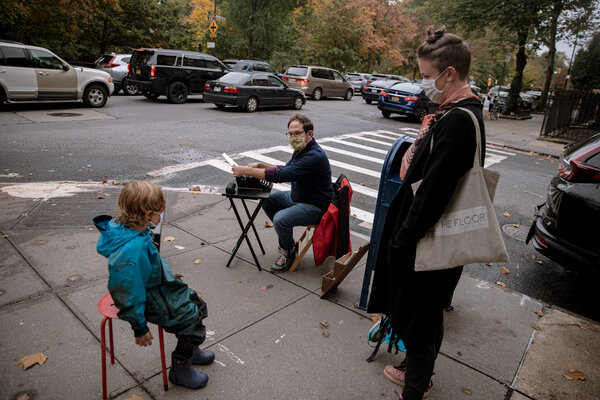 On a recent foggy morning, Brandon Woolf was sitting on a foldable chair, in front of a foldable table, next to a Brooklyn mailbox, writing letters on a 1940s-vintage portable Royal typewriter. He was dressed in a navy blue T-shirt emblazoned with the U.S. Postal Service logo. A chalkboard sign in front of him explained the project to passers-by: “Free Letters for Friends Feeling Blue.”

Mr. Woolf, 37, doesn’t work for the post office; he’s a performance artist with a doctorate, on the full-time faculty of New York University. In addition to teaching two courses via Zoom and directing the Program in Dramatic Literature for undergraduates, he is currently doing a sidewalk piece called “The Console.” That’s shorthand for “consolation.”

Inspired by the somewhat antiquated tradition of writing condolence notes, Mr. Woolf helps draft letters to be mailed in the box a few feet from his makeshift desk, on the corner of Fourth Street and Prospect Park West. Now in its fourth week, “The Console,” which he describes as “post-dramatic theater,” will continue through Monday. It’s timed to coincide with “the heightened anxiety” surrounding the election, he said.

Sure, there have been one-minute novelists and one-minute poets with acts in a similar vein, but Mr. Woolf’s creative endeavor stems from the latest trio of troubles: politics, the economy and the coronavirus. “We’re all grieving for something right now,” he said, whether it’s the loss of a friend or family member, a job or a routine. An instrumental recording of the 19th-century folk song “The Letter Edged in Black” played in a continuous loop on a small speaker in front of him. (The song title is a reference to the black-bordered paper on which condolence notes were traditionally written.) 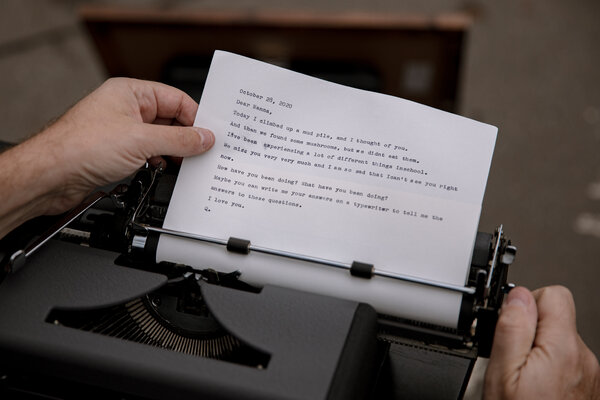 Peanuts fans might find the setup reminiscent of Lucy’s psychiatry booth and hand-lettered sign, “The doctor is in.” Like the process depicted in the comic strip, this one starts with what sounds like talk therapy, as it did for Cole Page Whipps when he stopped by with his mother, Mackenzie Whipps.

Cole, who is 6 years old, decided to write a letter to his grandfather, who is in the hospital. “What would you like to say to Grandpa?” Mr. Woolf asked Cole, who was seated on a red stool six feet away.

“Hi, Grandpa, I hope you feel better,” he said.

“That’s a great start,” replied Mr. Woolf. With a hunt and peck at the keyboard, he exercised some editorial license and added: “You can do it. I love you.”

Cole paused. Artful phrasing takes time. Mr. Woolf asked about Cole’s favorite subject in school (math) and what he likes to do with Grandpa (play math games). Then he helped with the phrasing: “This week in school I learned a new game. It’s a math game. I like the game because I like math, and I know you like math, too.”

Though his sign suggests that he is offering a service, Mr. Woolf said he prefers a collaboration, like this one, “that reflects both of our personalities.” He was struck by the unexpected melancholy of the encounter with Cole. “I was immediately having thoughts about my own grandfather,” he said, “who was very sick when I was Cole’s age.”

In a city of cynics, not everyone is ready to hold forth, even when the paper (with “The Console” letterhead), envelopes and stamps are free. “Plenty of people ignore me. They try not to make eye contact, and walk away,” Mr. Woolf said.

Some stop by just to use the hand sanitizer that he leaves on top of the mailbox. During one performance, a biker raised in Mexico City pulled up to say that it reminded him of outdoor typists in the parks, when he was growing up, who were scriveners to the illiterate. “‘You’re in a long line of people who do honorable work,’” Mr. Woolf recalled him saying. Then the man rode off.

Weather permitting Mr. Woolf has been out there for two-hour or 2½-hour intervals several times per week. He said he gets at least one taker every time he’s at the mailbox, and sometimes there has been a socially distanced line. He estimated that he had written more than 50 letters, each of them unique.

So far no one has made so much as a snide remark, nor have there been any objections from Postal Service employees, he said. Once he got what he described as “a coy smile” from the letter carrier emptying the box.

That mailbox is more than just a prop in Mr. Woolf’s performance — it plays a starring role. “The mailboxes are quite lonely, like the rest of us in quarantine,” he said. From his desk he has observed people taking photographs of each other mailing their ballots. “When we see the amount of mail with voting, it seems like a space filled with possibility.”