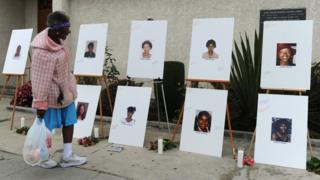 Over three decades in the late 20th century, there was a rise in serial homicides in North America. One historian asks whether the ravages of World War Two were a factor.

Peter Vronsky’s fascination with serial killers began when, at 23, he bumped into one in a lift.

It was 1979, and the Canadian historian was in New York City for work.

He was impatiently waiting for the lift, which was stalled on the fourth floor of the seedy Travel Inn Motor Hotel, and shot a dirty look at the man who bumped his shoulder as he left the elevator that had finally arrived in the lobby.

“He kind of just saw through me,” says Vronsky. “He looked like a guy in a daze. It’s as if I wasn’t there.”

The next morning, Vronsky read about an horrific double murder and mutilation that had taken place in the hotel the previous day.

It was a year later, seeing newspaper coverage on the arrest and trial of Richard Cottingham, that he finally realised that the “Butcher of Times Square” and the man in the lift were one and the same.

It made him wonder: “Where did these monsters come from? What are these things?”

Vronsky’s encounter with Cottingham came during a serial killing peak in North America over a three-decade period.

Data compiled by various researchers suggest a rise in serial killings starting in the late 1960s, peaking in the 80s – when there were at least 200 such murderers operating in the United States alone – and a subsequent downward trend over the next two decades.

Criminologist James Alan Fox, with Northeastern University in Boston, said that the rise in serial killings in that era – the time of when the likes of Ted Bundy, Jeffrey Dahmer, and John Wayne Gacy were stalking the streets in the US – likely had several roots.

First, that period coincided with a general increase in violent crime in the US and Canada.

Society at the time was undergoing major changes – people were moving more and were less likely to know their neighbours. Hitchhiking was more common, making it easier for killers to find vulnerable victims.

“It just created an environment which was ideal for certain killers to prey on victims,” Fox says.

The use of familial DNA recently led to the arrest of Joseph DeAngelo, 72, suspected of being the so-called Golden State Killer, blamed for a spate of murders and rapes in the 1970s and 1980s.

Canadian criminologist Michael Arntfield says police at the time were out of their depth when it came to tackling the rising number of serial killings, and research around these types of homicides – committed by calculating killers – was in its infancy. The term “serial killer” was only coined in the early 1980s.

“The offenders certainly had a head start,” he says.

Other factors theorised to have contributed include the media and public fascination with serial murder creating a snowball effect; the development of an interstate highway system, which gave some killers a wider geography to roam and kill; and, related to the overall increase in crime, lead exposure from petrol.

Vronsky has another hypothesis to add to the list: he believes the rise of the North American serial killer in the late 20th century can be traced to the ravages of World War Two, which lasted from 1939 to 1945, and the children of men returning from battlefields in Europe and the Pacific.

It’s an idea he put forward in his newly published book Sons of Cain: A History of Serial Killers.

Searching for reasons behind the glut of serial murders over three decades, Vronsky looked at the killers and their childhoods.

“Serial killers come from among us – they come out of our society,” he said.

“These are not aliens that arrive from another planet. They’re children who grow up to become these serial offenders.”

He realised that many were children during World War Two and the ensuing post-war era – a time when the psychological impact of the global conflict and its savagery was not being discussed.

It was a war that “was far more vicious and primitive than we have been able to acknowledge”, Vronsky says.

Many of the killers from that period have not spoken on the record about their fathers, he said, but those that have often referred to them coming back from the war in a traumatised state.

He said there was a less pronounced but noticeable increase in serial killings from 1935 to 1950, following World War One, and hopes sociologists and criminologists look more closely at the war experiences of the fathers of these killers, and their paternal relationships.

Vronsky also pointed to popular culture of the post-war era as a contributing factor, specifically the pulp fiction and true crime magazines that were widely sold across North America with covers that often depicted violent sexualised imagery.

“At the core of it is trauma, familial breakdown, and then a cultural scripting of the fantasy [they later act out],” he said.

It’s a plausible theory, says Arntfield, noting there was a “major upheaval going on in society” in the post-war decades.

“The surge in suburbs and the complete makeover of the demography of the country lead to a lot of transience, a lot of mobility, a lot of broken families, which is where many of these people came from,” he said.

Arntfield, like Vronsky, believe there are similar trends in this century – social upheaval, the 2008 financial meltdown, wars and terrorism – that might spur a similar phenomenon in the coming decades.

“We are living in the throes of an equally tumultuous and polarising time. And that immediately gave way to the ‘golden age’ of the serial killer,” Arntfield says.

Of course, many veterans returning from war became great fathers, children of men traumatised from battle grew into emotionally healthy adults, as did many children from broken homes.

“We’re not entirely sure when and why that switch gets thrown,” Arntfield says.

A report from the FBI’s behavioural unit notes that “there is no single identifiable cause or factor that leads to the development of a serial killer. Rather, there are a multitude of factors that contribute to their development.

“The most significant factor is the serial killer’s personal decision in choosing to pursue their crimes”.

The FBI estimates that less than 1% of all murders in a given year are committed by serial killers.

“It’s a cocktail of things, it’s never one thing,” Vronsky says, of what in the end, spurs these killers to commit homicide.

“That’s why I think it’s even too early to write off old-fashioned Biblical evil, whatever that might be.”