It’s Tuesday. We’ll be off Thursday through Jan. 3. Happy holidays!

Weather: Expect a gradual clearing of the skies with a high in the mid-40s. It will be clear but near freezing tonight. 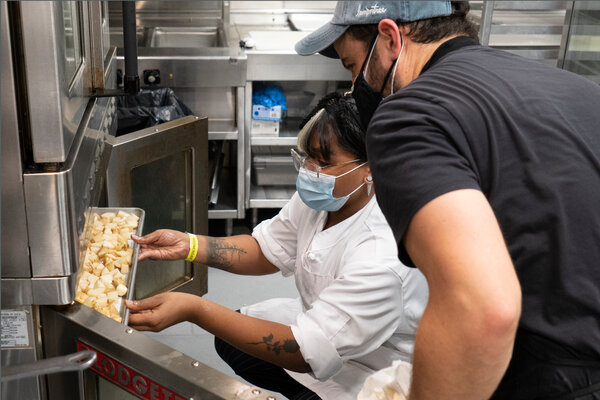 Sapphire Cornwall lost her sales job in March to the pandemic.

She began collecting unemployment benefits, which eventually shrunk to $125 a week. She applied to other jobs, but at 20 years old her lack of experience was a barrier to hiring.

Ms. Cornwall’s story is not uncommon in New York City, where the pandemic set off a tougher economic downturn than in most major American cities. But among peers, her experiences are particularly salient: No age group has faced a worse crisis than young workers.

[Read more about why young adults are now struggling economically.]

Here’s what to know about their situation:

In the city, 19 percent of adults under 25 had lost their jobs by September, compared with 14 percent of all workers, experts said.

Young adults were especially vulnerable: Before the pandemic they held 15 percent of the jobs in the service industries that would be hardest hit.

The setbacks have especially hurt young adults who are Black, Hispanic or do not have a college degree; those workers have even higher rates of unemployment than younger people as a whole, a recent report found. They are also more likely to be struggling because their families lack resources to support them.

My colleague Winnie Hu spoke with experts who warned that the consequences of losing a job as a young worker — including lower wages, fewer prospects and long-term hardship — may reverberate for years.

“On top of that, the economy is going to suffer,” said Stephanie Aaronson, a vice president and director of economic studies at the Brookings Institution. “It holds back economic growth.”

State and city officials are working to help through existing job programs. But the challenges have been so vast that some social service agencies and community groups are choosing to hire young people themselves, instead of steering them elsewhere.

Knowledge Westbrooks, 23, was hired by a community group in Brooklyn after he was laid off from a warehouse job. “I wasn’t able to pay for food and stuff so I had to try to figure out another opportunity,” he told Ms. Hu.

N.J. Approves $14 Billion in Corporate Tax Breaks in Less Than a Week

More Than 70 West Point Cadets Are Accused in Cheating Scandal

A Call to Help, Still Sounding a Century On

Amid concerns about a more contagious coronavirus variant, some airlines will require travelers from Britain to be tested before flying into New York. [NBC New York]

Officials found an accelerant at the site of a large house fire in Queens that killed three people this weekend. [NBC 4 New York]

And finally: In 2020, these books kept New Yorkers busy

In the spring and early summer months, the city’s three systems shut down their more than 200 branches to prevent the spread of the coronavirus. But in a year marked by quarantine and social isolation, checkouts of e-books rose alongside stories on themes of escape and solace.

As nationwide discussions erupted over the summer around race and racism, demand for books on the subjects surged across the country, a trend reflected in the city’s libraries. Titles like “White Fragility: Why It’s So Hard for White People to Talk About Racism” by Robin DiAngelo were among the most popular in some boroughs.

Most of the top checkouts in 2020 were new additions to the annual list. But “Becoming” by Michelle Obama, last year’s most borrowed book, remained sought-after, breaking the top five in both Brooklyn and Queens.

“Our top titles reflect a city seeking to uproot the long legacies of racism and sexism, to understand how we arrived here and how we might imagine a more equitable future,” Linda E. Johnson, the president and chief executive of Brooklyn Public Library, said in a statement. “They reflect a city that has fought to sustain its sense of community despite the distance.”

It’s Tuesday — check it out.

Years ago, on my mother’s birthday, I gave her a copy of Jan Morris’s “Manhattan ’45,” a fabulous book that describes all that happens in New York City on June 20, 1945, the day the Queen Mary, in front of huge crowds, pulled into New York Harbor bringing soldiers back from the war.

“Oh, I was on the Queen Mary that day,” my father said. He walked into his room and quickly came out with an ID card that proved that, yes, he had been on that boat.

“Oh,” my mother replied, “I was on my lunch hour, downtown.” She said she had been on the top of what she called the Pickering Hicks building that day, “where I could see the Queen Mary coming in!”

Until that moment, neither of them had known the other was there.